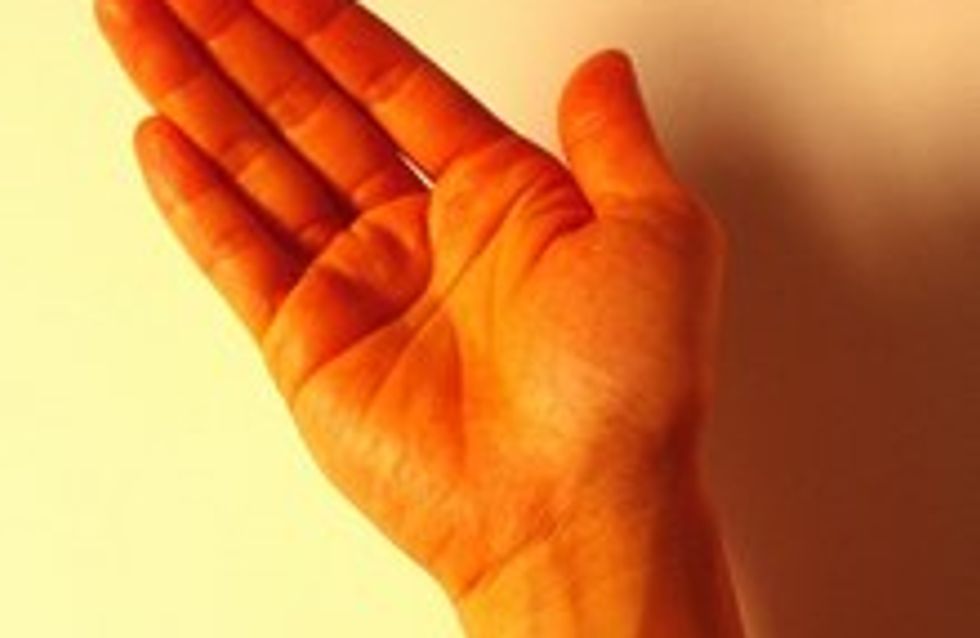 Palmistry is the art of telling the future through the lines on people's hands. It’s an act of divination that began many centuries ago. Here's our guide to it.

The lines of the hand

Life line (or age line)
This is one of the most important lines. It starts between the thumb and index finger and heads towards the wrist. It represents our degree of vigour, energy, physical strength, performance and sturdiness.
Very clear contour: fulfilled sexuality.
Wavery bend: lack of energy and vivacity, low libido.
Thin and clear: good vitality and good willpower.
Large line: muscular power but an unstable nervous system.

Head line
The horizontal line is in the middle of the hand, underneath the heart line. It determines whether you use logic or imagination in your thinking.
Thin and deep: intelligence and high spirits.
Large: superficiality, a weak will and materialism.

Fate line
It starts vertically from the base of the hand, heading towards the mount of Saturn, dividing the palm in two. It represents the element of luck in your life and destiny.
Absent line: a person who will have to work hard to succeed.
Deep: success, but without satisfaction.
Starts at the life line: the subject will only rely on his or herself.
Starts at the wrist: if it’s well defined, luck and success throughout life.

Heart line
This runs horizontal on the upper part of the palm. It governs emotional affairs, reveals love potential, and speaks of your relationships with your partner and those close to you.
Absence of this line: complete insensitivity.
Straight: thoughts control the emotions.
Starts under the index finger: love and jealousy.
Starts under the middle finger: totally sensual. Pleasure presides over all.
Starts from the third finger: reduced emotional awareness.

Health line
if you don’t have this line, you have no need to worry. It generally ends on the mount of Mercury, and most often starts at the wrist.
If it crosses the life line: it generally indicates a long-term illness.
If it stops at the life line: anxiety and anguish (keep an eye on your diet).
If it doesn’t touch the life line: a few health problems, but nothing serious.

Marriage line (or love line)
Situated under the little finger on the side of the hand. Only take the clearest line into account, as there are often several. This line speaks of marriage or sexuality.
Clear and straight: a happy relationship.
Several weak lines: several relationships without marriage.
Line that climbs: single.
Line that descends: divorce.
Clear fork at the start: difficulty at the beginning of a relationship.
Fork at the end: break-up.

The mounts of the hand

- Venus symbolises maternity and life. The Mount of Venus is situated at the base of the thumb, between the life line and the thumb. If it’s clearly marked and fleshy, it’s a sign of a desire to please, a permanent need for human contact (love, friendship, communication with others etc). If the Mount of Venus is flat, the individual struggles in relationships with others and doesn’t come across as very attractive.

- Mars is the god of war. It symbolises enthusiasm for love, demanding friendship, or even jealousy, intolerance and cruelty. The Mount of Mars occupies two positions. The first Mount of Mars (called the positive Mount) is situated under the life line close to the thumb. If it’s well developed and firm, it’s a sign of authority, determination and courage. The second Mount of Mars (called the negative Mount) is situated between the heart line and head line on the other side of the hand. If it’s well developed and firm, the person who possesses it isn’t violent, and their courage and eagerness are intellectual.

- Jupiter: The Mount of Jupiter is situated under the index finger. If it’s well developed, it’s a sign of domination, power and command. This person lives for the moment, is impulsive and can’t stand contradiction. They are hugely loyal; their place is at the top and not in the ranks. If the Mount of Jupiter is inexistent, the subject is shy, apprehensive, doesn’t assert himself and fears contact with others.

- Saturn is the god Chronos, symbol of time and construction. The Mount of Saturn is situated under the middle finger. If it’s clearly marked, it’s a sign of prudence or distrust in relations with others. The person likes solitude and is serious in their studies and work. The absence of the Mount of Saturn is a sign of a light-hearted, inconsistent, frivolous nature.

- Sun (or Apollo): The Mount of the Sun is situated under the third finger. If it’s clearly marked, it’s a sign of glory and aesthetic ability. This person has taste in all areas, likes human contact and is generous. The absence of the Mount of the Sun is a sign of poor chance of success, and a person who prefers to perform, rather than give, orders.

by cheree
From hair ideas to outifts, look no further for your daily inspiration

Your Free Monthly Horoscope: Read September's Forecast For Pisces!
by the editorial team

Your Free Monthly Horoscope: Read September's Forecast For Sagittarius!
by the editorial team

Your Free Monthly Horoscope: Read September's Forecast For Gemini!
by the editorial team

Your Free Monthly Horoscope: Read September's Forecast For Aries!
by the editorial team

Your Free Monthly Horoscope: Read September's Forecast For Capricorn!
by the editorial team

Your Free Monthly Horoscope: Read September's Forecast For Virgo!
by the editorial team

Your Yearly Horoscopes 2017: Aquarius
by the editorial team

Your Yearly Horoscopes 2017: Gemini
by the editorial team

Your Yearly Horoscopes 2017: Taurus
by the editorial team

Your Yearly Horoscopes 2017: Cancer
by the editorial team