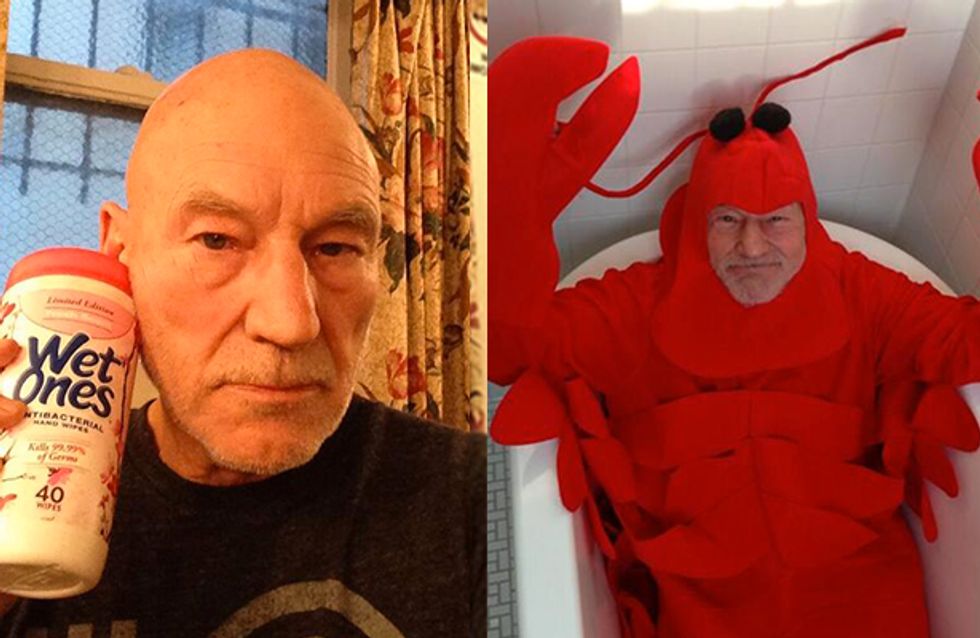 Patrick Stewart rules Twitter. End of. From well-timed political satire, a personal insight into the best bromance in the world (Ian McKellen gets a shout out here too), to being an all round hoot and a half, his Twitter account is a small gift from God. Here's 15 reasons to follow Patrick Stewart right now.

Yesterday David Cameron tweeted a photo of him on the phone to Barack Obama condemning Putin's attack on Ukraine. You know, just so we all know he's actually doing something in there. Cut to a twitter melt-down with parodies and memes popping up all over, but none more well placed than Patrick Stewart's.

So just in case you haven't experienced the joy that is @SirPatStew, here's 10 reasons why you should get on over and click that follow.

He's the human gift that keeps on giving.

3. He appreciates the comic value of fruit

4. He's one part of the best bromance in the world

Just quit it with the tiny hats P-Stew. WE CAN'T COPE.

5. He naps with cats at Christmas and photographs the evidence

Sunday's paper on a Monday, yesterday being (a great) Opening Night. @TwoPlaysInRep pic.twitter.com/Qj03RBVkbo

10. He insists all special announcements are made in ball pits

Self portrait in candy floss pic.twitter.com/ybIlZ7NfLL

Help. Found a tiny baby bird in my garden and brought it in. What can I do? pic.twitter.com/ZupAYjDatI

13. He loves the best things in life

I love this place and the beautiful Shard is almost finished - but who wants to live with their head in the clouds? pic.twitter.com/WrLRUMgY

14. He always has a witty response

Well, @guardian it makes for a nice change...at least I didn't wake up to the internet telling me I was dead again.

Was his response when the Guardian mistakenly outed him as gay...

Isn't he just THE BEST. Tweet us if you agree (which you do) or if there are any moments we've missed at @sofeminineUK.