25 Signs You're Dating A Mummy’s Boy

by Vivian KELLY Published on 7 March 2014 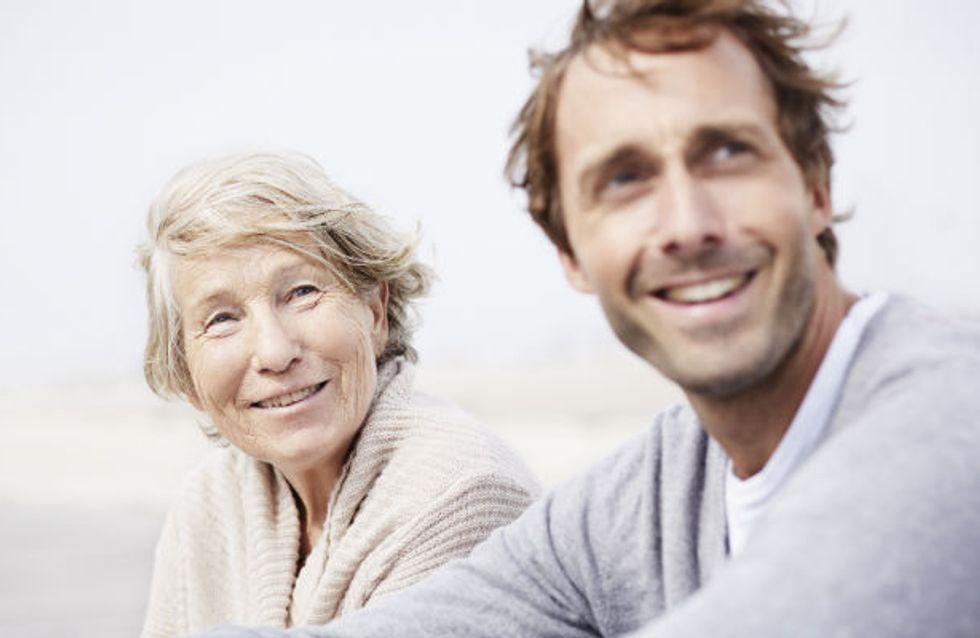 Going out with a mummy's boy can be tricky. He might spend so much time with her that you wonder who's actually in the relationship. Resent her calls? It can happen, but on the other hand, mama’s boys do come with some major perks. These type of men tend to understand their girlfriend's better and seem to have more respect and love towards their partners. Does your sweetheart have the mummy's boy syndrome? Look out for these signs...

If you're dating a man who clearly loves his mum it's almost ALWAYS a good sign. But what about when things go too far?

​If you're man is still living at home and he's over 25 or if he's always calling mum for help and advice on every aspect of his life, then maybe this whole mother and son bond thing isn't as great as you hoped.

You're right to raise an eyebrow, but (and this is a BIG but) mama's boys are so understanding towards their women, not to mention pretty thoughtful too. Whether it's all the time he spends in his mother's presence or all the speeches and lectures she's given him on how to treat a lady, whatever she did, it worked.

So our question, do the positives of dating a mama's boy outweigh the negative? You tell us...

First up, here's the tell tale signs that his mum will always be his number one woman.

1. His mum comes over unannounced.

He has an intrusive mother who comes over unannounced every week for various reasons, to check up on him, to do him favours (any ironing dear?) or even to just say ‘hello’. So she says...

2. He thinks his mum is superwoman.

She’s everything perfect in his eyes. He straight-up idolizes her. Hardly surprising when she does literally everything for him!

You find yourself constantly frustrated with her sticking her nose in your business. Mums always want to know what their son’s are up to and if they’re willing to spill the beans (which most mama’s boys are) they’ll manipulate him to get him to talk.

It’s common knowledge now. You know exactly when she’s had a crummy day. She confides in your man ALL the time.

5. She cooks, cleans and does his laundry.

Your boyf thinks she’s amazing, but you think she’s nuts! His mum constantly does his chores. Laundry, dinner and cleaning - done. For the sake of your future, he needs to do it himself. Sorry mom.

6. His mum's opinions mean more than yours.

He’s always mumbling ‘well, my mum says...’. And despite having a one to one conversation with him she always manages to interfere even when she's not actually there. How she does it, we don't know.

7. You’re competing for his affection.

We pray it’s not a monster-in-law situation, but if she’s constantly hugging and kissing him more than you’ve ever done it’s GAME ON girl.

Being a mama’s boy is by no means a bad thing. Actually, they tend to be more respectful and kind towards their partners, which is a major plus for us. Some say they make the most loving partners. We agree.

Have you ever found his mum throwing jabs at you (directly or indirectly)? Do you always seem to upset her? Nothing you do is good enough? Don’t let it get to you.

10. He came from a single parent household.

There’s nothing wrong with growing up with just a mama around, but their bond is probably unbreakable. Love her or leave him.

11. He compares your cooking to his mum’s.

Infuriating? YES. He always says ‘my mum’s is the best’ or ‘sorry honey, you can't beat my mum’s. In his eyes nothing is better than his mum's home cooking. We won't give up.

Gun. To. head. You’ve just come home from work and all you want to do is relax with your man, but somehow he ends up on the phone to his mama, whether she’s calling him off the hook or he’s constantly checking in sometimes you question who’s really the GF.

13. He acts like a man baby when his mum's around.

When you go over his mum’s for a family meal you can always see the little boy in him coming out. All of the sudden he's swinging off trees, doesn’t feel well, and is exhausted. Apparently. Erm, what happened to your boyfriend?

When you go shopping you’re always hinting at which pressies you want for Christmas, but all he seems to care about is what mommy wants. Annoyed? Yes.

When you get into a love spat over something she said or did he always defends her with ‘she’s my mom’. You can't win.

His mom has a way of getting him to feel guilty if he’s not doing things her way. If his mom isn’t happy neither is your beau. Care to share mum?

It’s pretty self explanatory. He’s got it good, he sleeps there rent-free, gets free daily maid service and doesn't have to grow-up. If he hasn't already moved out, he probably never will.

Some mothers can’t accept that their children are growing up. From bank calls to doctors appointments she’s got it covered. Will he ever learn?

19. He pressures you to please her.

And if you refuse he gets upset. His mom is the most important person to him so if mama ain't happy he isn't either.

When a man is really attached to his mum he’ll ask you to change your ways. If mom doesn't like what you're wearing or how you decorated the house he comes running for you to change it. Yea, she can try.

He wants to live out his mother’s dreams. Mama’s boys want their mother’s to think the best of them so they’ll do anything and everything to impress her and at times, more than he does for you! It's pretty sweet though.

22. He talks to his mum about intimacy (AWKWARD).

There’s nothing worse than having his mom give you sex and relationship advice on how to pleasure her own son. That is just wrong! Please stop talking.

If anyone disrespects his mom he’s ready to fight. Doesn’t matter how big or small they are nobody messes with mama. And that includes YOU.

Yup, he cares too much about his mother’s feelings than to consider his own first. Probably not such a good thing...

25. They go on vacay together.

Mother and son vacays ? Perhaps a step too far. You’re not allowed to go and nor is his Dad. Now that's just weird. Deal breaker for us.

Are you dating a mama’s boy? For the better or worse? Tweet us @sofeminineUK