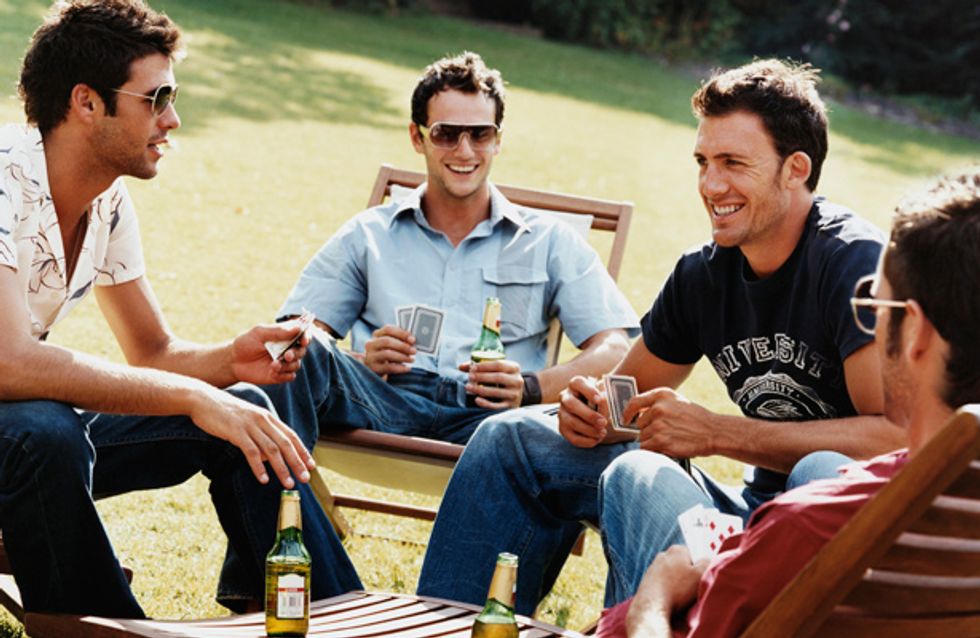 Male-bonding time isn’t just enjoyable for guys, a new study shows that it’s actually essential. A leading professor at Oxford University has conducted a whole bunch of research and his findings show that men should be spending more time with their mates – like they needed an excuse to head down the pub and watch the footie!

Oxford University Professor Robin Dunbar recommends men should see each other twice a week in order to maintain good physical health and well being.

Those men who managed to keep strong and well-maintained social groups were not only healthier and recover from illness more quickly, but they also tend to be more generous – which is never a bad thing, especially around birthdays and anniversaries…

But your man might not be getting the boy time he needs – either due to laziness (why are guys so useless compared to women at keeping in contact?!) or because the pair of you are attached at the hip (in which case, some time apart might do your relationship the world of good).

In actual fact 42% of men claim they only manage to meet their friends once a week and a further 30% struggle to catch up that frequently, which highlights a real necessity for men to invest more in their mates if they want to live better, richer and more fulfilled lives.

Danny Wallace – Shortlist columnist, author and expert on all things male – spoke to Sofeminine about why women should encourage their partners to get off the sofa and be social with their mates. After all their very health and happiness depends on it!

Why do you think men need more face-to-face contact?

I guess men like to take the mickey a bit more, and it’s easier to do that face-to-face. We josh, we banter, we make fun of each other, and it’s better to do that in a group. If you do it by phone, you’re essentially just phoning someone up and insulting them.

You need to see the micro-movements in each others’ faces, the whites of their eyes, so you can see that it’s all meant in jest. We also need more contact because we don’t use the phone to chat as much as women do, and we know from the research that chatting leads to bonding.

What tips would you give to men to keep strong and well-maintained friendships?

We need to take charge of our time and take charge of our lives. ‘Man Time’ is important and if we don’t organise it for ourselves, no one else is going to bother. Professor Dunbar’s report recommends men should meet up twice a week to stay happier and healthier.

One tip was suggested to me by a guy named Hugh – we already arrange Date Nights. Why not ‘Mate Nights’?

What's the ideal number of close mates for men to have and why?

Research genuinely shows that five people have the most entertaining time – it’s the optimum number for conversations because you laugh more and release more endorphins. When you add a sixth person to the mix, the amount of laughter a group provokes has been shown to decrease. I only hope I’m never that sixth person!

What should men do if their girlfriends/wives often get in the way of them having valuable man-time with their friends?

Well there you have it! Get your man to start making plans with his mates and while he’s preoccupied you can take the opportunity to indulge in some crucial catchups and girlie gossips with your best friends – everyone’s a winner!

Danny Wallace has partnered with GUINNESS to create and film a social experiment that demonstrates the importance of spending time with mates, to view it visit www.guinness.com from Saturday 26th October.

Do you think your guy gets enough 'man-time'? Tweet us @SofeminineUK!