What happens when David Beckham gets bored at a photo shoot? He locks himself onto a rooftop, zip lines in only his underwear, and has his boxers forcefully ripped from him by a loose nail. The soccer player bared (almost) all for his new Super Bowl commercial for H&M’s Bodywear line, and all the ladies loved it!

Once again, soccer superstar David Beckham shows off his smooth physique and woos swarms of fangirls with a gratuitous and oh-so-sexy H&M Super Bowl advert.

This year, David starred in a commercial for the brand’s Bodywear line and sported nothing but a grey tank and tiny blue boxers. After getting bored during a photo shoot, David decides to take a break on the rooftop, only to get himself locked out. After using his tank to zip line past a giant billboard of himself and finally getting back inside, a wayward nail snatches off David’s itty-bitty boxers, leaving him commando in front of the photographers.

The commercial was shot by Nicolas Winding Refn, whom David was elated to work with. The soccer player said in a press release, “It was so exciting to work with one of my favorite directors, Nicholas Winding Refn, on my new campaign for H&M. Nicholas pushed me hard to create an action-packed film, which show’s off this season’s new heritage-inspired bodywear at its best.”

H&M spent $4 million on the ad and were certainly paid back for their efforts. They were the only retail brand to land a coveted spot during FOX’s broadcast of this year’s Super Bowl, and Beckham fans everywhere are raving over the sexy commercial.

This isn’t the first time the soccer player has won over fans with his sexiness in a Super Bowl ad. In 2012, he starred in another H&M advert that caused quite a buzz as well, featuring David topless, wearing nothing but a pair of tighty whities. Ooh la la!

What do you think of this year’s H&M ad? Too sexy for words? Tweet us @sofeminineUK. 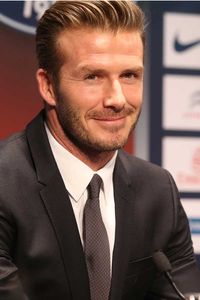 Sexy and smart: Why we fancy these guys

How To Say I Love You In 90 Languages

30 of our favourite romantic quotes

Men in touch with their feminine side