Oh David Beckham – you are ridiculously hot. And just when we thought we couldn’t fancy you any more than we already do, you don your biker leathers, sit astride your motorbike and smoulder in a very sexy new ad for British heritage brand Belstaff. We thank you for your services to womankind. We really do.

David Beckham has proved that he has what it takes to be a Hells Angel in his latest ad for luxury British brand Belstaff.

The former England footballer is a known motorcycle enthusiast, and he often used to be seen out and about in LA on his custom vintage 93 Knuckle (no we don’t know what that is either).

Now it looks like his passion for motorcycles has crossed over into his love for fashion, as the father-of-four is starring in a fashion brand’s short film about five bikers taking to the road for an epic journey.

The ad – directed by Justin Stokes – follows five men who travel over England’s roads from the Goodwood estate in the heart of the English countryside to the Belstaff store in London’s New Bond Street.

There the men are met by a large crowd of fellow bikers and a very rugged-looking Becks, to parade through Mayfair in celebration of the launch of the Belstaff flagship store.

Although he arrives with his helmet on, luckily for us at the end of the film the sporting icon takes his helmet off so we can catch a glimpse of his gorgeous crinkly eyes and cheeky grin.

David filmed the advert back in September during London Fashion Week and as the face of the brand, he will also be starring in Belstaff’s latest ad campaigns (dressed in their signature leathers and belted utility jackets of course).

Currently on the Belstaff website you can also catch a short film of Becks riding his two wheels across a muddy English field.

Speaking to the Telegraph about his love of motorcycles and comparisons to another avid A-list motorcycle Hollywood legend Steve McQueen, David gushed: "I'm honoured that anyone mentions me in the same breath as Steve McQueen, because I'm a huge fan of his for many reasons, for his talent and obviously his looks, his fashion sense."

He added: “What I love about riding is the freedom, you have a full-face helmet on.”

We’d rather you keep the helmet off Becks, or at least pull up the visor so it’s not shielding your face completely!

What do you think of Becks’ new Belstaff ad? Tweet us @sofeminineuk! 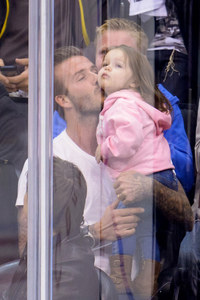