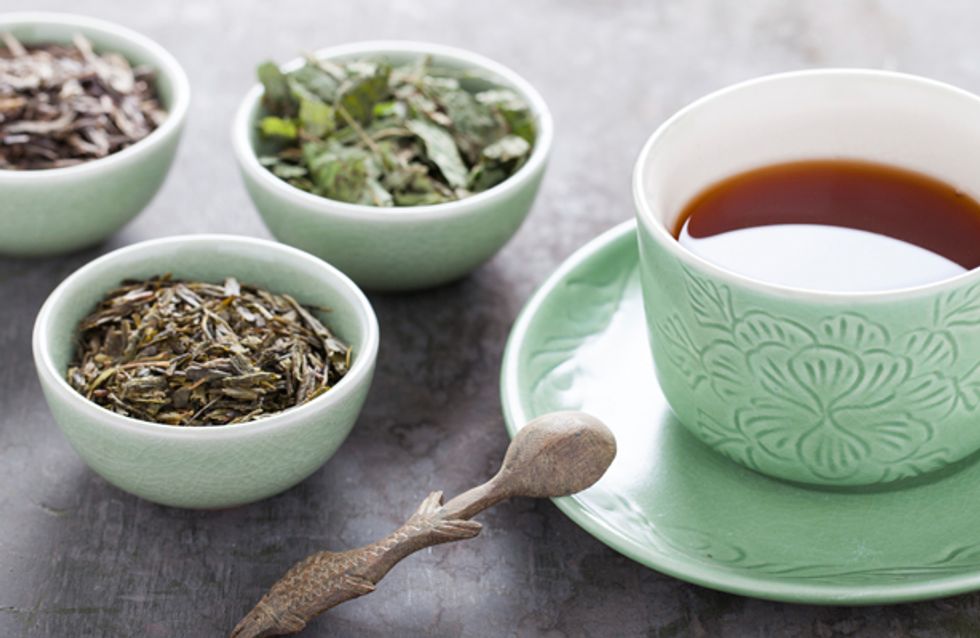 We’re guessing that if you’re reading this, you’ve heard about the ‘magical’ powers of green tea to transform your latte-ridden behind into a detoxified temple, right? Right. Green tea has long been used to detoxify the body and help improve health but if you knew how truly good these little leaves were for you, you'd be drinking it morning, noon and night. So here they are…the benefits of green tea.

When something sounds this good we’re hesitant to jump right on it – call us cynical if you will. Can something as simple as green tea be all it’s really cracked up to be? And what makes it so special anyway?

Bruce Ginsberg, the UK's leading tea expert and grandson to the founder of Rooibos tea says: "Fine green and white tea is made from the young buds of a tea bush, Camellia Sinensis. These teas undergo a much gentler fermentation process than traditional black teas, and studies suggest that this results in higher levels of flavonoids – so the green tea leaves not only make a refreshing drink, they are also richer in natural antioxidants."

​We asked the experts for their opinions and were blown away by the potential power of these little leaves.​ Just take a look for yourselves…

It speeds up metabolism

So here's the biggie we've been waiting for, does drinking green tea really help speed up your metabolism?

Bruce says some research shows green tea can boost the rate at which the body burns calories by as much as 40 per cent over a 24 hour period. It may also block the activity of intestinal enzymes needed to digest dietary fat so less fat is absorbed.

While that all might sound incredibly technical here's the takeaway: green tea helps you burn calories.

It can help fight wrinkles

It might seem far-fetched but actually using green tea as a part of the anti-ageing process is pretty obvious. Since green tea is so packed full of antioxidants it helps guard against the damaging effects of free radicals which are one of the main causes of wrinkles. You better believe it.

It's a natural stress reliever

In our modern lives we all need a desk-side treat that can make us feel a little less manic. Because of the theanine and amino acid found in green tea, it makes it a perfect candidate to reduce stress and promote relaxation.

​However, you need a fair bit of it to work, around six cups to be precise, which puts you on the same caffeine level as coffee. So stick to decaf green tea to feel the benefits. The powers of theanine shouldn't be underestimated.

Yep that's right, the British Journal of Nutrition published a study showing that the catechins within green tea can actually make your skin more resistant to the effects of UV rays. Which also helps with that premature ageing malarky. Mind. Blown.

It can help with pain relief

The EGCG flavonoid in green tea has another nifty effect too, pain relief. Obviously with any medical condition you should always consult your doctor first before glugging down the green tea. But one proven way to supposedly help with the pain from mild arthritis is to drink several cups of green tea per day.

It can help prevent cancer

This is a pretty big claim but don't be put off. The flavonoids that give tea its rich colour are powerful antioxidants that can help prevent cell damage. ​There have been several worldwide studies that have found links between green tea and prevention for skin cancer, breast cancer and other cancers​ but Laura says that the research is still slightly inconclusive.

“Although green tea diet has a reputation for promoting good health, scientific evidence for its benefits is still somewhat mixed. For example, cancer rates (such as breast, lung, gastrointestinal) tend to be lower in countries such as Japan where green tea is regularly consumed, but it is not possible to determine from these population-based studies whether green tea actually prevents cancer in people.”

It can help reduce heart disease

It can help reduce the chances of heart disease.

“Green tea has a beneficial effect on blood lipids, blood pressure and blood stickiness and can decrease the risk of coronary heart disease. There is research that people who drink at least four cups of tea a day are up to half as likely to have a heart attack as non tea drinkers and 21 per cent less likely to have a stroke,” says Bruce. Those are some pretty scary statistics.

It can help prevent diabetes

A Dutch study in 2009 showed that people who drink three or more cups of tea per day are 40 per cent less likely to develop type 2 diabetes than those drinking none. This is because the properties in tea improve your insulin levels, and the polyphenols help protect against inflammation and carcinogens.

It can help keep Alzheimers at bay

There is a particular type of flavonoid which has been proven effective in delaying the onset of Alzheimers. Studies by the University of Michigan and the University of Leeds and research by Chinese scientist Mi Hee Lim all found that the EGCG within green tea appears to protect the brain from the accumulation of amyloid plaques.

These are believed to be associated with brain deterioration and therefore, the EGCG properties within green tea can be seen as preventative measures towards dementia.

It helps to protect your teeth

One of the worst things about coffee is the effect it has on your teeth, brown teeth are just not hot. Thankfully, green tea is here to the rescue again. Dr Uchenna Okoye from London Smiling says, “The fluoride found in tea has been shown to inhibit the growth of glucosyltransferase - the substance that helps plaque that naturally form on teeth.”

It has substantially less caffeine

One thing that might still catch you out is the fact that green tea does still contain caffeine, but it's still much less than coffee or other teas. In fact green tea has about 20g of caffeine compared to the 135g found in coffee. ​
​
Marina Krstic, Amanzi’s tea expert, says: “Green teas contain half the amount of caffeine found in black tea and approximately 1/6 of the caffeine found in coffee. So for those who are not sensitive to caffeine, our recommended daily limit would be around 3-4 cups a day. However, for people who find themselves more sensitive to caffeine they should be looking at about half of this."

It makes you happier

Last but not least is the fact that green tea allows you to be your happy old self.

Bruce says: "As a tea master said to us on a recent trip, 'Drinking tea makes you happy; it calms you down but makes you attentive, it's an aid to meditation and it's good for your health', and who are we to argue with a Master?”

Pouring yourself a pot of it right now? You'd be stupid not to! ​So if we've convinced you to put down that latte and boil up those leaves, tweet us your green tea moments at @sofeminineUK.