Tasty & Good For Your Health? 12 Amazing Benefits Of Cinnamon 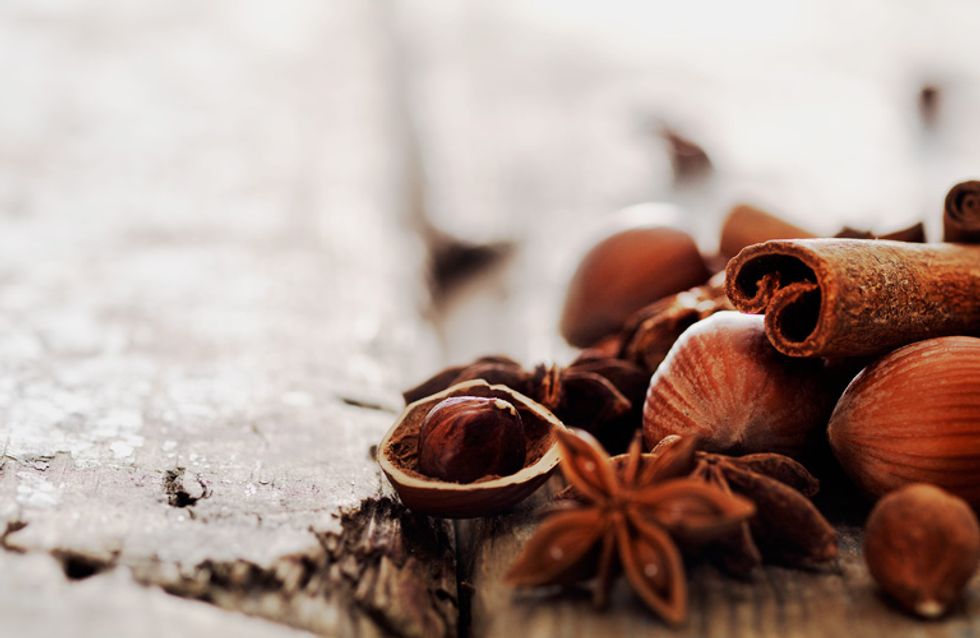 We love cinnamon for its nostalgic holiday scent and drool-worthy sticky bun recipes BUT that's notall this spice has to offer, it's amazing for health and well being too. From beating the bloat to warding off infections and keeping you calm there's not much this little brown spice can't do! Here are 12 awesome benefits of cinnamon you'll be surprised to know...

Cinnamon, the bittersweet spice found in most of our kitchen pantries contains some major superpowers but are we utilising it to its full potential? Probably not.

From controlling your blood sugar levels to preventing neurological disorders and fighting acne this spice has a slew of health and beauty benefits to it's name.

Here are some ways to up your cinnamon​ (and no, cinnamon abuse, aka 'The Cinnamon Challenge', is not one of them).

How can I add more cinnamon to my diet?

Did you know there are TWO types of cinnamon?

Not all cinnamon is created equal. Clinical nutritionist and health expert, Yvonne Bishop-Weston says, "Cinnamon has been used to treat health conditions such as arthritis and sore throats since medieval times, but these days there are two types of cinnamon, Cassia (aka, 'bastard cinnamon') and Ceylon.

"Cassia is the one which has been shown to help balance blood sugar levels in people with Type 2 Diabetes. However, it comes with its downsides. This type of cinnamon has a high level of Coumarin, a compound which could pose a threat to liver health.

"Ceylon cinnamon (AKA, 'true cinnamon') does not have this potential toxin but has also not shown the benefits on blood sugar levels either. As a rule of thumb, I would recommend choosing Ceylon cinnamon which may not have the sugar balancing effects but is still a powerhouse of antioxidants!"

When buying cinnamon at your local supermarket, there's no way to tell the difference (although when you do end up smelling it, you will notice a difference). Cassia is far more pungent and striking to the nose, while ceylon is light and fragrant. Saying that, we recommend buying ceylon cinnamon from a manufacturer that states which type it is, like this one from Healthy Supplies.

So now that you know the basics of cinnamon, here's what you need to know about its superpowers...

Feeling like a blowfish lately? Cinnamon is a great cure for distended bellies.

Yvonne says, "Cinnamon has been shown to fight bacterial and yeast infections such as Candida which can lead to disrupted digestion and bloating". So sit back and have a cup of cinnamon tea, Amanzi make a gorgeous blend. Perfect for this time of year too!

Another natural remedy to try. "Fungal infections such as athletes food may also be reduced by soaking in diluted cinnamon oil", says Yvonne. Do it every night until it clears up. Not only is it a natural cure, but the smell will do wonders for your well being too!

From killing food-bourne pathogens in our food to keeping our countertops germ-free, cinnamon is one of the strongest natural disinfectants out there.

"Cinnamon’s anti-bacterial properties have been widely reported but that doesn't mean it's only good within the digestive system, it's also as a powerful disinfectant too", says Yvonne.

''If you have a bacterial or viral bug in your household try diluting cinnamon oil with water and using as a chemical-free cleaner. It can also help neutralise nasty smells. Cinnamon can also be found in mouthwashes to help combat mouth bacteria without damaging your gums". Add to curries and other dishes along with any other spices for a dietary bug busting dish! To get you started, try this 100% pure cinnamon leaf oil from Etsy. You won't regret you did.

When it comes to colds and flu, cinnamon is a must have in your cold busting kit. Ayurvedic therapist, Sunita Passi, says, "Eating ½ teaspoon cinnamon and 1 teaspoon honey 2 or 3 times a day can help keep a common cold, or cough under wraps. It will also help prevent congestion.

Furthermore, "If you suffer from sinus headaches, you may want to make a paste with cinnamon by taking ½ teaspoon with sufficient water. Spread the paste with your hands onto the affected area and let it sit for at least 20 minutes. Remove with a wet flannel and rinse off any residue with warm water, patting dry after". Ahh, we're feeling better already.

Got a sweet tooth? Pay attention! If you have a tendency to over indulge eating cinnamon could be an effective cure to help control those blood glucose levels. In fact, the results are impressive.

Yvonne says, "Cinnamon has been shown in a number of studies to improve blood sugar control in people with Type 2 Diabetes. This may be of benefit to non-diabetics too as reducing the blood sugar spike helps prevent the subsequent fall which can leave us feeling tired, headachy, nauseous and craving sugar and stimulants as well as turning our carb fuel into body fat".

Make it a daily cinnamon sprinkle! Yvonne recommends adding one to two teaspoons to your porridge to get the day off to a balanced start (choose Ceylon for children).

6. It makes a great brain food

Can cinnamon prevent and fight dementia? Studies with mice show some promising results!

Healthspan's Head of Nutrition, Rob Hobson says, "Research published in the Journal of Alzheimer's Disease has highlighted the potential positive benefit of cinnamon compounds (cinnamaldehyde and epicatechin) in the prevention and treatment of Alzheimer's which is the most common form of dementia."

Using cinnamon to treat dementia may be a real thing one day! But keep in mind these studies were done in a lab setting so there's much more evidence needed before this can be determined. But upping your intake can't hurt, right?

7. It's a muscle relaxer

Yvonne says, "The warming properties of cinnamon make it a beneficial addition to massage oils to help relax muscles post workout or for those with age-related aches and pains, it may however also thin the blood so check before using if you are on medications for this."

For a soothing detox treatment have a warm cinnamon bath. All you need to do is add a few drops of cinnamon oil and a couple of teaspoons of honey and there you have it - the perfect rejuvenating bath recipe.

With its impressive history of medicinal benefits scientists are now taking the spice a little more seriously by investigating cinnamon as having potential benefits to those with Multiple Sclerosis (MS).

"This is a disease where the protective covering of nerve cells is affected leading to nerve damage. Sodium benzoate from cinnamon may even help prevent the inflammation which causes this damage as well," says Yvonne.

Animals studies have showed dramatic results with symptoms of treated mice being almost indistinguishable. However, what is true for animals is isn't always true for humans. So do add a sprinkle of cinnamon to your diet to help relieve symptoms (after all, it's great for inflammation) but never​ take cinnamon as an alternative to your prescribed medication.

Discover the youthful benefits of cinnamon by adding ½ to one teaspoon of cinnamon to your daily diet!

Yvonne says, "Cinnamon is rated as one of the top seven dietary antioxidants. This ability to protect body cells not only has implications in helping reduce the ravages of ageing but also protecting us from the free-radical activity of daily living and could potentially support health from skin quality to cardiovascular disease to fertility".

Like most food we buy, the fresher they are the better they are for you. When you buy cinnamon make sure to keep it in a cool dark place and in a air tight container.

If it's 'that time of the month' again or you have a bit of a tummy ache reach for a pot of cinnamon and brew yourself a mugful of delicious spiced tea.

Antonia Hyltén-Cavallius from Amanzi, London’s premier tea bar, says, "Cinnamon tea has numerous health benefits. It helps to regulate blood sugar levels, it can add in boosting the immune system and it may even help to relieve menstrual pain!

​"Lots of our female customers buy cinnamon tea for this reason. Also, it may aid in weight loss, help to fight bacterial and fungal infections and help to protect teeth and gums. The tea itself contains high levels of calcium and iron and is also rich in anti-oxidants." So what have you got to lose?

At Amanzi, their Cinnamon Spice tea is blended with three types of cinnamon, zesty orange peel and sweet cloves. "As naturally sweet tea, it’s also delicious as a cinnamon latte with milk or almond milk," says Antonia. If you fancy a bit of a twist try one of their specially crafted holiday blends, Mulled Wine and Pear & Cinnamon which both of course, contain the spice.

As Antonia mentioned, cinnamon is a very good source for calcium so when it comes to keeping your bones strong and healthy cinnamon is one to consider.

Healthspan Head of Nutrition, Rob Hobson adds, "Cinnamon is a rich source of manganese which plays a key role in the absorption of calcium and formation of bones and connective tissue which has led researchers to investigate its potential use in the treatment of osteoporosis".

A cup of cinnamon tea daily or massaging cinnamon oil onto painful joints may even help relive symptoms related to bone health. You've nothing to lose!

One more reason to add cinnamon to your diet, we promise!

​This healthful spice can also do wonders for your skin, especially those who suffer from acne. Cinnamon's anti-bacterial and anti-microbial properties make it great for sweeping away bacteria and essentially clearing up your skin.

For a gorgeous spot busting face mask just mix a teaspoon of cinnamon with a tablespoon of Comvita Manuka Honey +10 UMF. Leave for 15 to 20 minutes and rinse away with a warm soft flannel. Be consistent with it though, the results will be better than you think.

Are you loving cinnamon as much as we are now? Tweet us @sofeminineUK