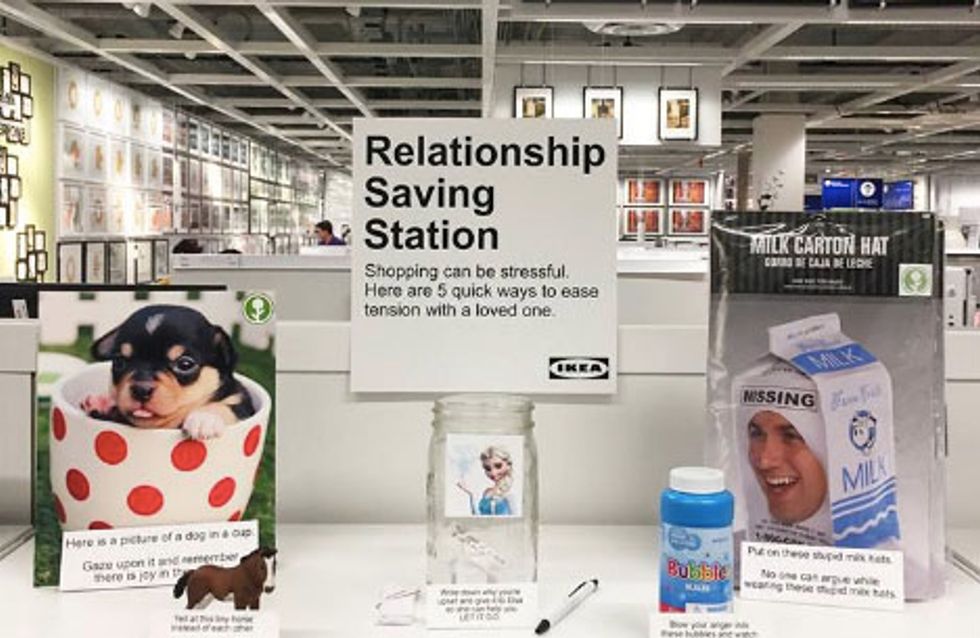 There's nothing like a trip to Ikea on a Saturday afternoon to put the final nail in the coffin of a relationship. Luckily, comedian Jeff Wysaski snuck into the Swedish furniture shop - AKA hell on earth - and installed a 'Relationship Saving Station' to rescue all newly co-habiting men and women from the inevitable.

Jeff Wysaski: relationship saviour. Or at least that's what he'll be known as from now on after he went into his local Ikea and erected a Relationship Saving Station.

Your first trip to Ikea as a couple will end up revealing your true selves and that can make or break a relationship. Didn't think your boyfriend was one to care about the difference between a birch and pine finish on the kitchen cupboards? Well, all secrets come out at Ikea. Jeff Wysaski, who goes by @obviousplant_ on Twitter, knows this, which is why the comedian's relationship station is a godsend to all furniture shoppers.

I installed a 'Relationship Saving Station' at IKEA to help keep couples from fighting. More of this on FB: https://t.co/1P2lnaJ5gV pic.twitter.com/dFljvLZlrF

Wysaski, who is known for sneaking weird and wonderful fake signs into shops, included in his Relationship Saving Station: a tiny horse to yell at, a picture of a tiny dog in a cup to stare at adoringly, an Agony Elsa jar to put all your couple grievances in, milk carton hats (because no one can argue with a milk carton hat on) and bubbles to blow away your anger.

It's a strange feeling when you realise that someone understands you and all your needs, isn't it?

What do you think of Jeff's station? Genius right? Let us know @soFeminineUK