Is there anything David Beckham can't do? Clearly not content with his CV full of talents - including sportsman, charity ambassador, model and doting dad (we could go on) - he's now said to be thinking about becoming a film star...

David Beckham is said to be considering a move into movies following his retirement from football last month.

A source told Heat magazine: "Tom Cruise has already put him in touch with a string of producers and directors, as well as giving him advice.

"He also suggested he hire an acting coach.

"Tom studied the Meisner technique, which is a type of acting training built on specific exercises.

David's wife Victoria, 39, is also said to be supporting his new venture, even travelling across the pond from their home in London to get things moving.

An insider said: "Vic was in LA not just for half term, but to have meeting with key Hollywood players about David's film offers.

"People like Clint Eastwood have put big-money offers on the table for David to appear in films - not lead roles, but walk-on parts."

Fashion designer Victoria reportedly wants her man to appear in a film for Brad Pitt's production company, Plan B, or even take over from Daniel Craig as James Bond.

The former Spice Girl said last week of David's possible move into acting: "Why not…I've been in Spice World and that was a great performance!"

It wouldn't be David's first acting experience - he made a cameo appearance in 2005 film Goal! and its sequel in 2007.

He's also starred in numerous ads, including a recent one for his H&M underwear line, which was directed by Guy Ritchie.

And Hollywood producer Harvey Weinstein - the man behind blockbusters including Silver Linings Playbook and The Lord Of The Rings - is also confident David could be a successful actor.

He said: "I am a real fan. I think he could do anything he wants in TV and film."

Couple this with rumours Becks is hoping to turn his life story into a movie, and we're pretty excited! 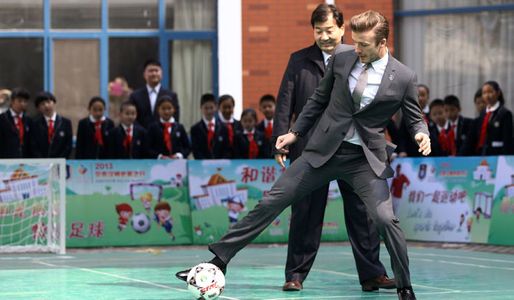