With his champion success and her winning Wimbledon wardrobe it's no wonder Burberry have got their eye on Andy Murray and Kim Sears. The Brit brand is allegedly lining the pair up for their next couples campaign and if the rumours are true we're getting our champagne and strawberries out to celebrate. It's only right!

Tennis legend Andy Murray may not be the obvious model choice but his chiseled jawline and champion cheekbones have obviously impressed the decision makers at British fashion house Burberry.

The fashion brand has allegedly been eyeballing Murray and his glamorous girlfriend Kim Sears ready for their next couples campaign.

Following in the footsteps of Sienna Miller and boyfriend Tom Sturridge, Murray and Kim would be the next pair set to schmooze in front of the lens for the label.

According to reports Burberry designer Christopher Bailey is keen to get Andy and Kim on board after dressing the pair for their red carpet appearances.

Style icon Kim would undoubtedly settle into her model role with ease and elegance (she's had enough practice up in VIP box) but we wonder how Mr Murray would feel about swapping his tennis talents for a stint in the studio.

Kim took centre court this year with her Wimbledon wardrobe and bouffant blowdry. Wearing ditsy floral prints, high street faves and and that Mulberry Willow arm candy, she topped polls for her tresses and her dresses.

For the final she donned a mint green Victoria Beckham dress to see her beau be crowned Wimbledon champ 2013. That girl sure knows how to dress for success.

Camp Burberry has yet to confirm details about the campaign but we're going to be waiting in the sidelines like a ball boy for this one!

What do you think of a Murray-themed Burberry shoot? Tweet us and let us know @sofeminineuk

Check out Kim's courtside chic closet in the gallery below: 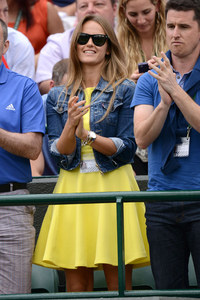