There’s just no stopping Cara Delevingne - this girl just has to look at a luxury brand to land a new campaign. It’s not enough that she’s already the face of Saint Laurent, Mulberry, Pepe Jeans and YSL beauty, now the power-browess has added Fendi to her ever-budding fashion resume. Does this girl ever put her feet up?

Brit model Cara Delevingne is a fashion force to be reckoned with and she’s showing no signs of slowing down yet.

The 20-year-old has just landed yet another campaign for Italian fashion house Fendi – that’s another designer ticked off the wish-list.

The campaign called 'Roman Skyline' was shot by the one and only Karl Lagerfeld on a sizzling rooftop in Rome. 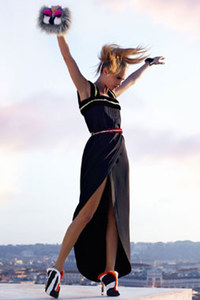 Striking plenty of poses in sky-scraper heels Cara strut her stuff at dizzying heights. Someone’s not afraid of vertigo.

Cara walked for Fendi in their autumn/winter 2013 show at Milan Fashion Week where she donned an eccentric purple mohawk. Is there anything she won’t try?

Wearing the same pair of statement orange, black and white shoes from the Fashion Week show in February, Cara fills her boots with plenty of model attitude.

She’s certainly not one to hold back when it comes to her modelling, remember her recent Mulberry campaign with her feathered friends?

Karl Lagerfeld said of the new campaign: "For our 2013-2014 Fall/Winter season, we sought to celebrate the love between FENDI and Rome with a very feminine campaign evoking a chic and modern Roman holiday."

What do you think of Cara’s sky-high campaign with Fendi? Tweet us and let us know @sofeminineuk