Flesh Flashing Frocks! What The Stars Wore To The Nickelodeon Kids' Choice Awards

The 2014 Nickelodeon Kids' Choice Awards were held on Saturday at the USC Galen Center in Los Angeles. The event is geared towards children, so one would naturally expect the attire at the event to be kid-friendly. However, this year, a number of attendees decided to up the va-va voom factor, leaving us wondering if it was too much flesh or nothing more than a few fun flirty frocks...

The annual Nickelodeon Kids' Choice Awards typically serves as a treat to both parents and children; allowing the entire family to enjoy a fun-filled night of slime and good tunes. While the event carried on as usual on Saturday night (did anyone see Pharrell covered in green goo? Awesome!), we, like many others, began to wonder if the night's attire skewed too sexy for the young demographic.

There was admittedly a bit more flesh on the orange carpet than we're used to. But was it inappropriate? You decide!

See what the stars wore below: 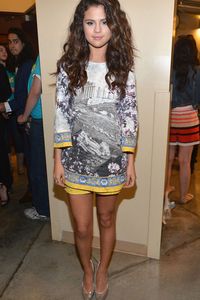 What do you think of the night's looks? Which look do you love best? Tweet us @sofeminineUK!