When the anticipation of the royal bambino's arrival was finally announced, it was onto the next wait-for-it event to break - the future King of England's first peek at the world. Baby Cambridge aside, we were going gaga for Kate's Jenny Packham dress! It was a Diana double take.

Little more than 24 hours after their new bundle of joy was born, Kate Middleton and Prince William left St. Mary's hospital for home.

When Kate and Wills emerged from the Lindo Wing with their royal baby, it's safe to say we were amazed at the Duchess' post delivery-day poise (not to mention her wardrobe and that hair).

The Duchess is a huge fan of Jenny Packham, so what better way to celebrate the birth of her bambino than with her fave fashion designer? 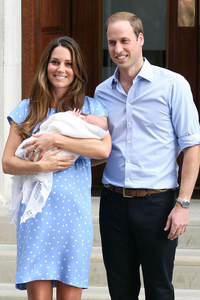 Bearing a striking resemblance to the spotty dress Princess Diana donned after she gave birth to baby William, Kate looked radiant as she cradled her first born in the baby blue crepe frock.

She's known for recycling her wardrobe with Topshop polka dots and LK Bennett wedges, but it seems there was extra sentimental value to Kate's outfit choice yesterday.

The hospital photo call was reminiscent of Diana and Charles' first appearance after William was born. Anyone for tissues?

Commenting on the arrival of their new baby, William said: "He's got her looks, thankfully."

​That's one lucky future King - think of the hair!

What do you think of Kate's post-delivery-day make-over? Are you loving her Jenny Packham dress as much as we are? Tweet us @sofeminineuk

Check out all the photos from Baby Cambridge's debut...