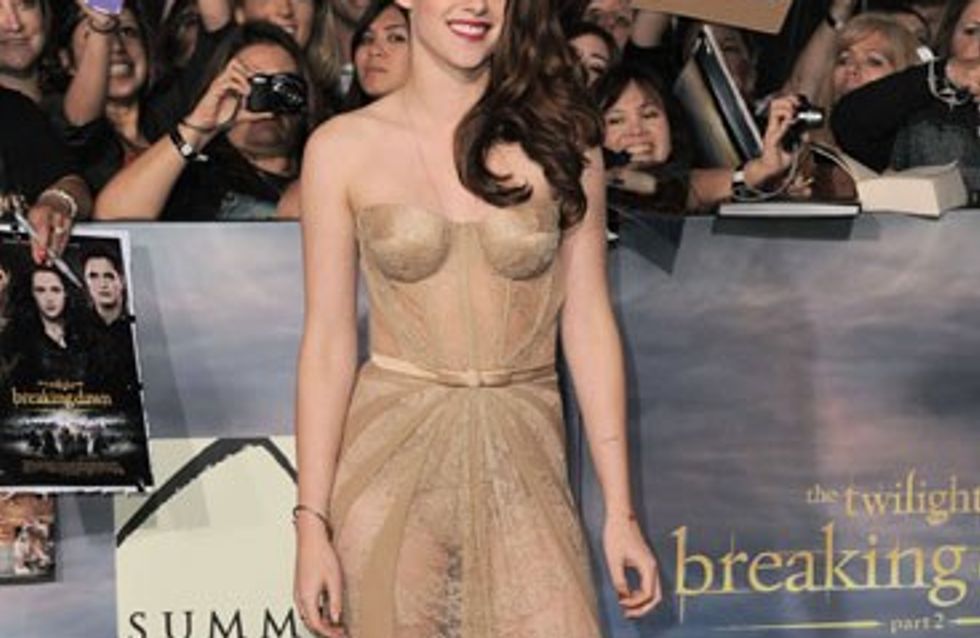 Kristen Stewart's long-suffering stylist has revealed she has to beg and plead with the Twilight actress to get out of her Converse and into a pair of heels.

Tara Swennen, who's also the fashion brain behind Miley Cyrus and Kate Beckinsale, has styled Kristen through her Twilight red carpet appearances - and it seems it hasn't been easy.

Tara told The Cut: "There are definitely times when I have to say, 'Please, please, please put the heel on just for me.'

"[Kristen] will always change into her Converse by halfway through a carpet, which is to be expected at this point, but she puts on the heels for me for the photos, God bless her.

"At the end of the day, I want my clients to be comfortable because I think it shows. She needs to put on her sneakers and that’s alright with me.

"It’s part of her personality; I think it’s fun when she does it."

Nonetheless, Tara is a huge advocate of the high heel because of its flattering effect on a woman's body.

She continued: "I clearly prefer heel. Regardless of it being any type of heel, I think it elongates the silhouette, which obviously you always want to do, make them look taller and have that longer look."

Tara managed to get Kristen in her glammest outfits yet for the various premieres of the final Twilight movie, Breaking Dawn - Part Two.

For the world premiere of the vampire saga in LA, Kristen chose a stunning nude Zuhair Murad dress with see-through lace panels.

Days later in London, the 22-year-old stepped out in a super-chic jumpsuit by the same designer - and even completed her look with a pair of stilettos.

And it seems Tara was pretty pleased with her efforts.

She said of Kristen's whirlwind Twilight tour: "Just recently, she’s embraced doing the long-gown thing, so it was definitely an opportunity for me to stick as many as I could on her.

"We just wanted to make a grand escape, I guess, rather than a grand entrance. And through the years, she’s come into her own, and so now she’s letting me play a little bit more.

"She’s grown into being more comfortable on the red carpet; she’s definitely embracing elegance and gracefulness.

"Obviously I’ve been able to push more on her, but I think her confidence level is really the thing that’s changed the most over the years."

She's still got a little way to go, though - Kristen was spotted leaving the Leicester Square cinema following the film screening in jeans, trainers and a khaki jacket emblazoned with "God Loves Ugly".

by Esme Riley
#Essentials
For all the best videos, memes and shareable news!