Taylor Swift, Carrie Underwood And More Dazzle At The 2014 ACM Awards- See What The Stars Wore

Awards season is still in full effect! Last night all the hottest stars in country music put on their finest wares and headed to the 49th Annual Academy Of Country Music Awards, held at the MGM Grand Garden Arena in Las Vegas. Taylor Swift and Carrie Underwood were only a few of the famous faces in attendance. See who else showed up and showed out below.

It was certainly a night filled with sizzling looks. Celebs took their turn down the red carpet wearing sexy body-skimming frocks and shoegasmic heels.

A notable ensemble came from Taylor Swift who turned heads when she ditched her signature glittery gowns, and instead opted for a sexy minimalist J. Mendel crop top and high slit skirt.

​Her fellow country singer Carrie Underwood skewed glam angel in a white Oscar de la Renta fringe gown complete with wavy tresses. But these two country music queens weren't the only ones looking hot last night. Check out the rest of the red carpet looks below: 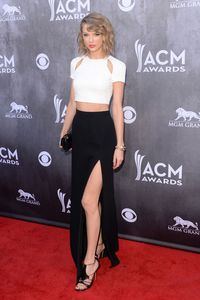 Who had your favourite look at the 2014 ACM Awards? Tweet us @sofeminineUK!

Cliche Wynter
…
From hair ideas to outifts, look no further for your daily inspiration