by Lareese Craig Published on 30 September 2013 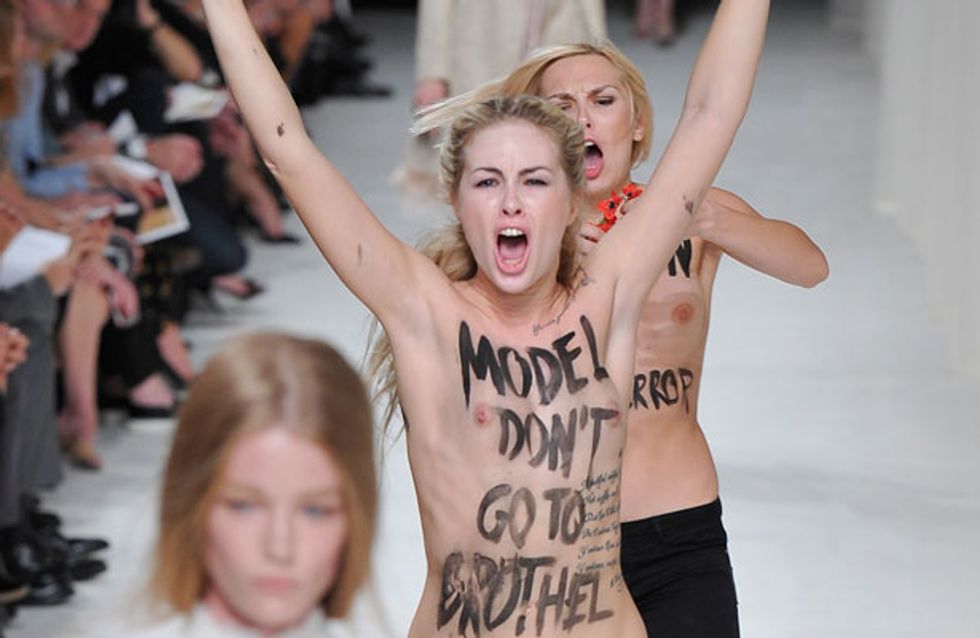 A fashion show's never short of pre-show drama and runway-related madness but topless protesters causing chaos on the runway is probably one thing the FROW-ers didn't sign up for. The Nina Ricci show was interrupted by two FEMEN activists using their naked tactics to spell out their message. There's a few things in fashion you can't predict or prepare for, and here's one of them.

Models taking a tumble, dresses getting caught in heels, finale woes - all these problems tend to be ironed out in dress rehearsals and pre-show run-throughs - but there are certain Fashion Week dilemmas you just can't prepare for.

The VIPs sat on the front row at Nina Ricci's Paris Fashion Week show got more than they bargained for this weekend.

With fashion often comes nudity for art's sake - whether that be sheer tops presented on braless models or a thigh-high eyeful. Either way it's usually a very planned move.

But not this time! The Nina Ricci Spring/Summer14 collection was interrupted by topless protesters from one of Europe's most notorious women's rights groups, FEMEN.

The daring duo stormed the stage with their usual near-naked tactics, showing off their scrawled-over chests, which bared the slogan: “Model don’t go to brothel".

The message refers to the Ukrainian women being abused in the sex industry.

Invading Fashion Week is no new tactic for FEMEN, who caused havoc at the Versace show last year by holding up anti-fashion signs.

Hollie-May Saker, a Liverpudlian supermodel who walked in the Nina Ricci Paris Fashion Week show, told The Mirror: “I was so angry but I knew I had to be professional so I carried on walking with a bit of sassiness.

"Thinking about it now I wish I’d pushed them both off the stage because they ruined my favourite show."

What do you think of the Nina Ricci protests? Tweet us your thoughts @sofeminineuk