by Cliche Wynter Published on 4 February 2015 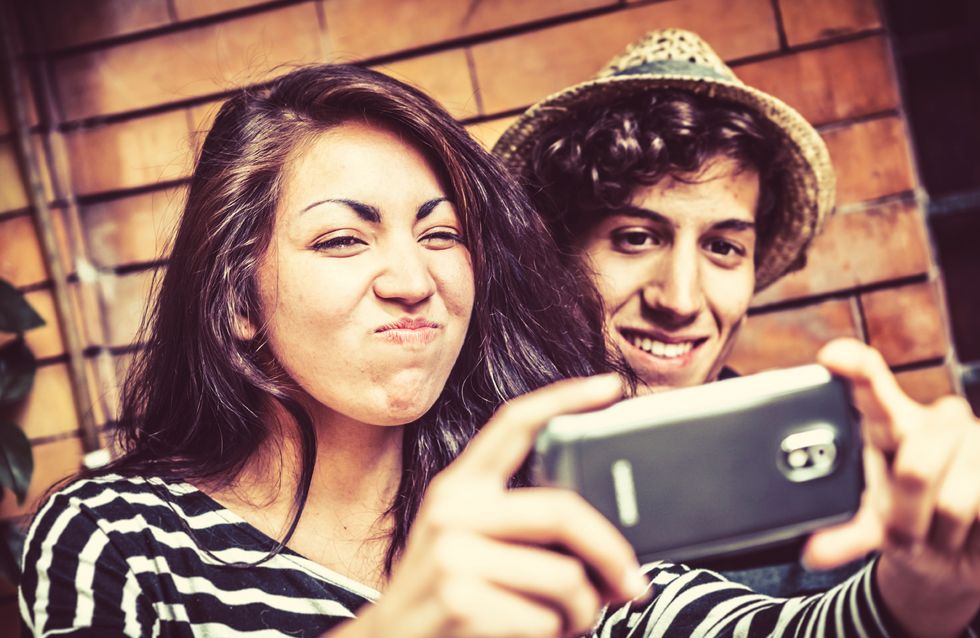 We ALL know Tinder is notorious for being the hook-up app. And while that's all great and dandy, it doesn't help much when you're looking for some real commitment. Sure there are success stories, but the odds are generally not in your favour. That's exactly why we rounded up the best dating apps (aside from the aforementioned) that you need to try in 2017. Happy hunting...

We won't lie, the single life comes with a couple of perks (not having anyone to answer to, the freedom to be 100% selfish, etc.) but honestly, we're tired of being THIS chick (far right FYI):

Don't get us wrong. Booze is a worthy and loving partner on many occasions (it's even helped us dump our fair share of scumbags). But no matter how good it's been to us, once the buzz fades, the loneliness creeps back in like the little cretin it is. And at this point, we need something considerably more sustainable.

That's easier said than done though.

In today's world, it's practically impossible ("impossible" not an exaggeration in this case) to come across someone that isn't a complete creep solely out to get you onto the blow-up mattress they got on sale at Wilko. It's straight up hunger and thirst games out here.

BUT there might just be the faintest glimmer of hope, after all. As it turns out, there are a handful of apps out there (besides Tinder) that will match you up with someone you're compatible with beyond just looks.

Now we're not going to say you'll be hitched within six months, but we'll say it's better to actively be in the game.

Here are a few apps you should give a shot this year...

One app to keep your eyes peeled for is the new U.S. based dating app 'Coffee Meets Bagel' which caught our attention when it outright claimed to be "The only dating app that women love". Essentially, they provide you with one match (bagel) per day at noon. Upon receiving this match, you can either like or pass.

"We wanted to create something for you to look forward to every day, something that adds excitement to spice up your lunch break

But is it an app that women actually love? Well, it currently has a three star rating in the Google Play store, so it's at least above average and worth a shot.

Sign up here to be the first to know about their London launch party deets! See you there.

Founded by Alex Parish and Julian Keenaghan, Tastebuds is an app that allows you to meet other folks who share your taste in music. The idea came to life after the innovative twosome met in London while playing in a band. They eventually came to notice that they always met incredible people through music. From there an idea was born.

Although Tastebuds isn't marketed as a "dating app", it does ask you for your sexual orientation. That noted, it's also just a great way to meet new people who are just as enthusiastic about Taylor Swift's new album as you are (or aren't?). Which, let's face it, is all that matters in life at the moment.

The lesson here: music is the key to the soul.

"Why should we go on dating websites when we meet so many new people every day, in real life?" is Happn's train of thought. Unlike most apps, it doesn't need your mutual friends to get you a match. It works by putting you in contact with those within your vicinity (that means it's time to turn your location on).

So that fit guy you just passed on the tube platform? You can totally get connected with him instead of it being one of those, "I wish I would've just said something to him" moments. Which, as we all know, is the worst.

Hinge is the app that sets you up with people via mutual friends. "Real people, through real friends, in real life." They say. If nothing else, their premise alleviates some of the pressure that comes with meeting potential psychos. Not foolproof necessarily, but certainly a worthy attempt.

On HowAboutWe, they say it's "simple". It's all about posting a date idea, reaching out to someone you like, and arranging a day to get together. They also claim that what makes them different is that they encourage you to spend less time online and devote more energy to face to face action. The focus is mostly on the date itself and getting out there.

Sounds pretty simple to us!

OkCupid has been around for some time and is one of the most reputable online dating sites. As it turns out, they also have an app.The latest version makes it even easier for you to like matches (just double tap their photo), and has redesigned match cards that showcase the match percentages.

Plenty Of Fish is by far one of the most popular apps out there. And while they claim to be the largest dating site in the UK they also claim to "match you with online daters that meet your emotional needs." Allow us to repeat, emotional needs.

So as the cheapest and probably most ego boosting app of them all there's really no reason to give it a go! Just set up your profile and receive a notification every time someone wants to meet you or fancies sending you a private cheeky message. Simples.

Have you tried any of these? Give us the deets! Tweet us @sofeminineUK!

100 Of The Best Ever Love Quotes

What To Wear On A First Date: Style Secrets Every Woman Should Know