by Maria Bell Published on 23 September 2013 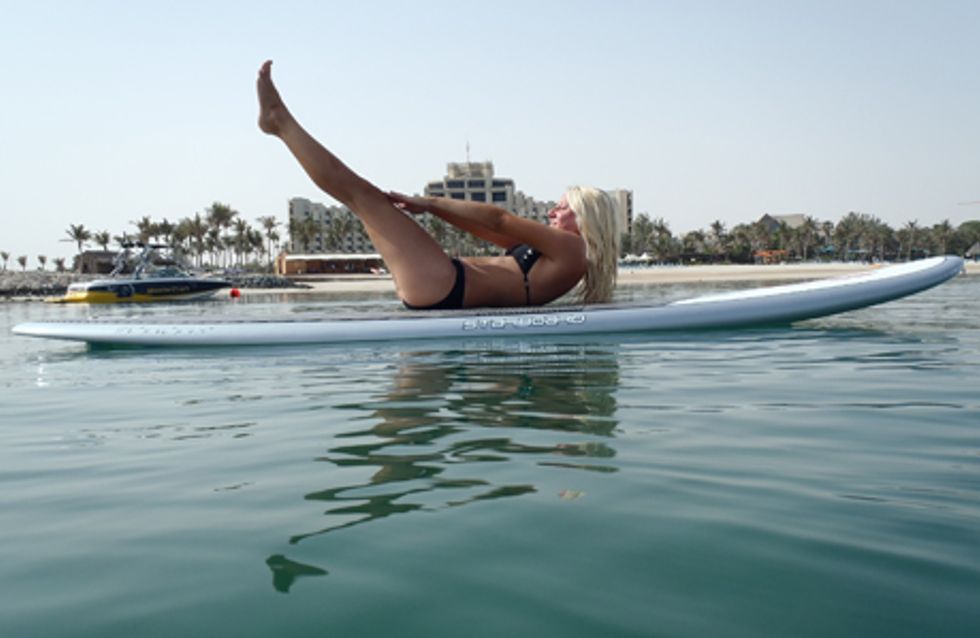 You know how sometimes when you love something, you can take it too far? Well world, we might have overdone it with yoga. From doing the ancient practice of yoga on horseback or blowing on a harmonica while perfecting your hatha, you might say that our obsession with yoga has got slightly out of control…

Despite the fact that there are already 50,000,000,000 different types of yoga classes on offer including being boiled alive or suspended mid-air, people still think that they can develop something new.

But just how far have we stepped into the madness? We take a look at the top 10 weird and wonderful yoga classes out there. And while we love the benefits of yoga, we're not sure if we can cope with these extreme forms of this ancient form of exercise.

We wouldn’t judge you if you thought the idea of doing yoga on a horse is pretty insane, but supposedly there are huge benefits.

Not only does yoga on horseback tone up your body – you’re on a live animal, that’s going to take some serious core strength to stay put. But doing yoga exercises like breathing whilst on horseback is a great example of the core principals of yoga – bringing together mind-body-soul in union - except this time you’re sharing it with a horse.

Jessie Tierney, Yoga Teacher and founder of Horseback Yoga in Colorado says: “Horseback Yoga teaches you how to unite with your equine partner in a meaningful way, through calming your mind, conscious breathing, heightening awareness, and gently opening tight spaces in the body. Through conscious awareness, this approach deeply enhances your connection to and communication with the horses you love, it’s applicable to all disciplines, and it’s a lot of fun!”

A surfboard isn’t just for surfing, pfft no. Now you can practise your yoga skills on one too – well, technically on a paddle board, but you get the picture.

The big benefit of SUP yoga, or Stand-Up Paddleboard Yoga, is to focus on your strength, flexibility, and balance reflexes, as demonstrated by the lady below at the Jebel Ali Golf Resort in Dubai. The very fact that you are on an unstable surface in the middle of the ocean means that you get an automatic muscle workout while being bobbed about soothingly by the sea. Sounds great!

A love of your body goes hand in hand with a love of good food, however yogis usually tend to opt for quinoa and veg than steak and dark truffles.

​But David Romanelli, organiser of a foodie yoga class, wants that to change. The idea of the class is that you do your full yoga workout but as soon as that last 'ohm' is over, it's time for a fully catered blowout meal.

According to a feature in the New York Times: “As soon as the lights went up, dinner was served on the floor: an (almost) seamless transition designed to allow the yogis to taste, smell and digest in a heightened state of awareness.”
​
As you might have guessed, this form of yoga is only available in the USA.

Yoga and raves are two concepts that don't normally mix in a sentence, ever. But now, thanks to the Art of Living Foundation, the two go together as naturally as yoga and vegetarianism. During the four hour rave you can expect to meditate, bust your moves and even chow down on some gourmet vegetarian grub.

The Yoga Rave website says: "At the party one can enjoy both music & silence. It all begins with some yoga to warm up the body & continues with an easy guided meditation that leaves attendees in the ideal state to hear So What Project!’s opening chords & slowly begin connecting with the music. At the end of the night there is another meditation."

You can't say it won't release the tension...

Yep you read that right, twerking is officially taking over and its latest victim is yoga. A thirty-three-year-old New York based yoga instructor, named Barbara Purcell, recently added the saucy move to her yoga classes after its explosive popularity made the decision a "no brainer."

She told the Express: "Yoga teaches an energy system within the body involving various energy points known as chakras. They basically move from our root, up the spine, to the crown. Lower chakra work with a bit of a twerk which is a sexually-charged move really helps this area - and it's proven very popular so far."

Supposedly the move is a perfect way to tone up that tush while engaging your chakra...well, it sure beats rubbing up on Robin Thicke, Miley.

We’ve had yoga on an animal and while floating on water; a stripper pole was just inevitable.

Technically we see the connection here. The strength needed to hoist yourself around a pole and hold the positions are similar to trickier yoga poses.

Maybe yoga round a stripper pole is just injecting a bit more fun into it all while taking your poses to another level of strength – we’re not sure if traditional yogis will agree.

If you’re a fan of Made in Chelsea you’ll be well aware of ‘Doga’ already, but for all the rest of you dog yoga is exactly what it says on the tin.

Combining massage, yoga poses, breathing and stretching for you and your pup, doga means that you can rest and recline with your canine while getting your dose of yoga.

Perfect for those who don’t like being away from their furry friend for long, not so much for everyone else.

This might not be the most intense yoga workout you're ever going to experience, but it may well be the most enjoyable, if not creepy.

It's a well-known fact that laughter is good for your health and so combined with the mindfulness of yoga this can only be a good thing, right? Well traditional is one thing it's not, you will find yourself miming milking cows, howling and generally larking about while forcing yourself to laugh.

The muscles when you laugh and the muscles you use in yoga are supposedly similar, and both work as a way of relieving stress.​

Harmonica yoga is not about blowin’ out a good tune, the benefits of using a harmonica when practising your breathing technique has obvious advantages.

David Harp of Harmonica Yoga in the US says: “Breath focus is essential to all the skills and practices [of yoga], whether at home, in the yoga studio, or in the workplace, because it short-circuits most types of stress reactions. The best, most effective, most entertaining way to teach a group of any size to focus on their breathing...is to teach them, mindfully, to play the harmonica.”

He's even given talks about the benefits of harmonica yoga as a stress reduction technique, particularly with disabled people, at the EUSE annual conference. ​A fun way to de-stress is always a good thing!

So would you give any of them a try? Tweet us your thoughts @sofeminineuk.

Sign up to get involved!
You might also like
Positive Quotes To Get You Through Your Day
by Pascale Day
17 Celebs Who Have Spoken Out About Their Mental Health
by Pascale Day
Yoga
by the editorial team
Wingardium Levi-YOGA-sa! This Harry Potter Yoga Class Is Totally Magical
by Pascale Day
34 Yoga Quotes To Inspire That Downward Dog
by Rose Adams
Beer Yoga Is The Latest Fitness Fad You Need To Try
by Pascale Day
21 Reasons Why Yoga Is The Best Workout Of Them All
by Maria Bell
Nauli Is The Freakiest Yoga Trick You'll Never Be Able To Master
by Helen Turnbull
Sweat Your Way To Good Health! 7 Hot Yoga Benefits You Need To Know
by Vivian KELLY
10 Weird And Wonderful Facts Every Woman Should Know About Her Butt
by Pascale Day