The Three Moves That Will Give You Beyonce Thighs 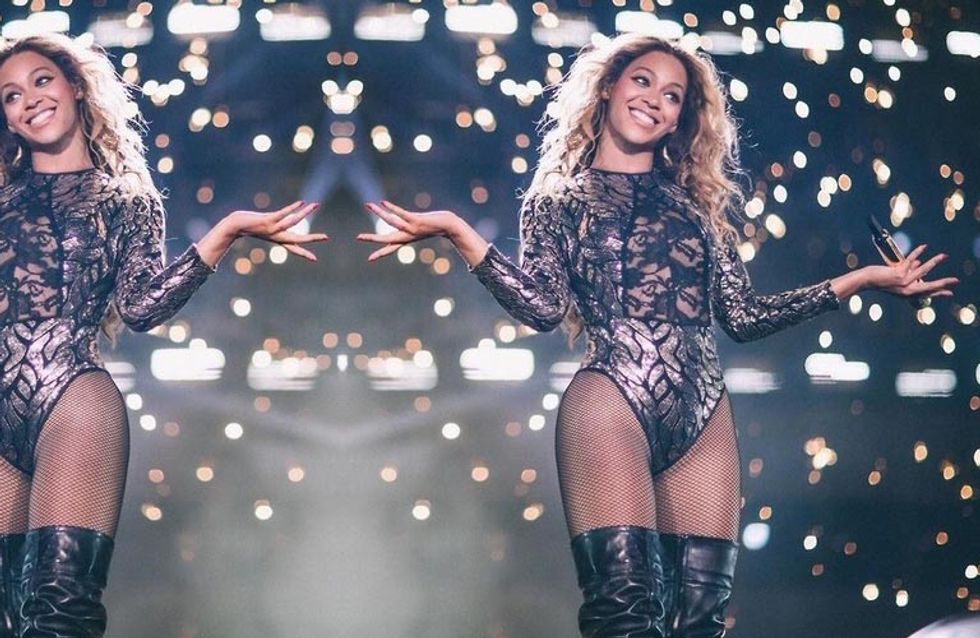 Grab those denim shorts out the back of the wardrobe and slap some suncream on those thighs - the sun has reached its peak here in sunny ol' England. That's right, the temp is over 21° and we are officially declaring it a roaring summer. But if you're worried about showing off those pins in your fave hotpants, we've got some seriously easy and effective leg moves to add to your workout.

There are so many beasty leg moves that are said to tone your lower limbs, but if you tried them all you'd never leave the gym (Both a dream and a nightmare). But what moves are going to work for you? We teamed up with Venus and ClassPass to bring you three simple but hella effective toning leg exercises that will give you flawless pins just in time for all this hot weather.

We know how hard it can be to try and gauge how to do a move from just a photo or a description, so we bring to you the moving image: the GIF in all its fitness glory. Hello 21st century, we've arrived!

This simple side lunge is an absolute killer for your inner thigh, so add this one to your repertoire if that's your problem area. Here's how you do it:

STEP ONE: Tie one end of a stretchy resistance band to something sturdy and loop the other end around your left ankle
STEP TWO: Stand a few steps away, stretching the resistance as much as you feel comfortable
STEP THREE: Stand the same foot on a sliding mat
STEP FOUR: Bending the right knee while keeping the left straight, slide the left foot out to the side, releasing the tension in the band
STEP FIVE: Then slide the left foot back to meet the right, pulling against the resistance
STEP SIX: Keep hands together at chest height, using your core for balance
STEP SEVEN: Repeat 8 reps then switch sides

This move is the hardest of the three, but once you get the hang of it it's oh-so rewarding. A dead lift done right is a major success for your whole body: weighted dead lifts will not only tone your legs, but your arms and your core too. Bonus! Here's what you need to do:

STEP ONE: Take a kettlebell in your left hand – the weight is up to you!
STEP TWO: Place the other hand behind your back or out to the side if you need help to balance
STEP THREE: Keeping both legs straight, extend the same leg as the hand with the weight out behind you, while bending at the waist and lowering the kettlebell to the floor
STEP FOUR: Move in this motion until your back and left leg are parallel to the floor, then return to standing
STEP FIVE: Keep full weight on your right foot and use your core to steady yourself
STEP SIX: Repeat 8 reps then switch sides

And check it out in action:

Now we all want a toned butt don't we, gals? But if you're getting bored of dropping it like it's squat, this move using a gym ball will be a breath of fresh air to your routine. Here's how to nail those moves:

STEP ONE: Lie flat on your back with arms by your side, legs outstretched, and heels on a medicine ball
STEP TWO: Lift hips to make a flat line from your chin to your toes
STEP THREE: Keeping core tight and hips raised, bring the medicine ball towards the butt with your heels until the knees are pointing towards the sky
STEP FOUR: Release and slowly roll medicine ball back out, until finishing at the same flat starting point
STEP FIVE: Repeat 10-12 reps

Check out the live-action version:

Do you have any moves that are killer for your legs? Let us know! @sofeminineUK

The MMA Workout: 5 Reasons You NEED To Start Exercising Like An Ultimate Fighting Champion

Want To Get Fit For Summer? 18 Reasons Why Barry's Boot Camp Is The Ultimate Workout​​