by Pascale Day Published on 4 February 2016 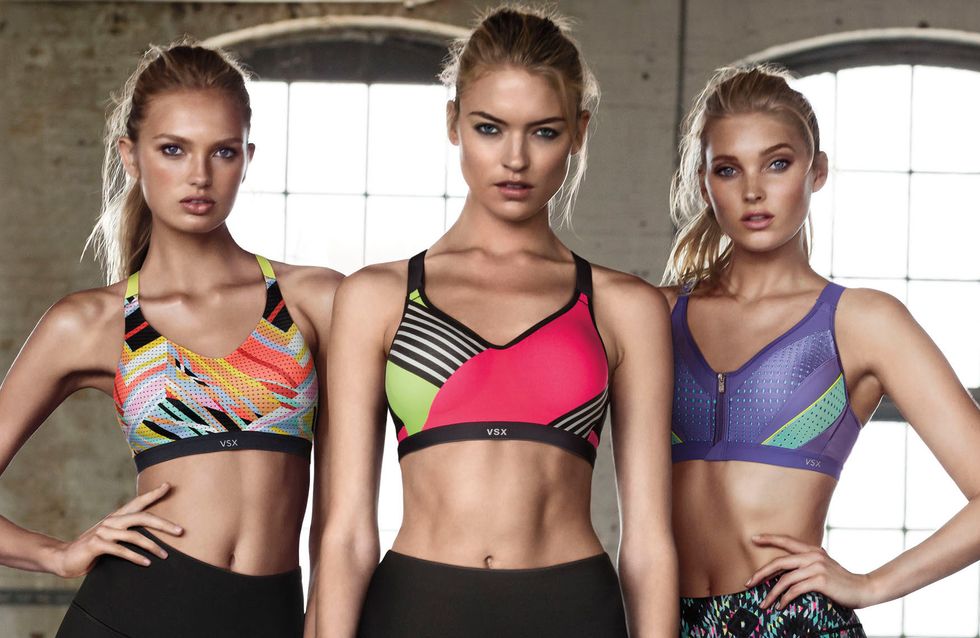 Gather round, Kendall. Take a seat Gigi. Because we have something to say to you: we're so sorry. We're sorry for all the times that we doubted how hard you work. Because contrary to popular belief, you don't get a body like that just by spinach. See, we went to a Victoria's Secret workout to see if we could #TrainLikeAnAngel and... spoiler alert: we could not.

The Victoria's Secret models have some of the most enviable figures in the world. But take it from us: it ain't easy being an angel. It takes a lot of hard work to stay that toned. A lot.

A combination of the best bits from the Angels' workouts, the Victoria's Secret fitness class is the ultimate fitness regime if you really want to tone up and get sculpted. We were invited to a #TrainLikeAnAngel session to see if we could handle being put through our paces by an honorary angel with holy sh*t abs.

When we arrived at the class we are greeted by Svava Sigbertsdottir, the mastermind/evil genius who created the tailored workout designed to make us sweat. Ahem, we mean perspire in a goddess like fashion.

If you can imagine the epitome of fitspiration, Svava was it. I guess you can't create a Victoria's Secret workout without having a figure like one, right? Judging by her toned bod, this was going to be no walk in the park. And we were right.

The class began as it meant to go on: HARD. We were put into pairs, with one of us completing a set of tricep extensions whilst the other did what we can only describe as a downward dog on roids exercise. This involved pushing a weight plate across the floor on a towel. It was certainly in at the deep end with this task.

This was followed by alternating between high kicks - which honestly? They make you feel totally badass - and military planks, which make you feel tired. So very tired. If you have no strength in your triceps and a flaky core, these will make you feel like you have Popeye arms after a just few reps.

Then, it was back into our pairs for a joint activity. Which makes it sound like it's fun, but believe us, it was not. One person settled into a downward dog position (that again!), whilst the other crawls through their legs. But here's the difficult bit: no arms or elbows or legs or stomach are allowed to touch the floor. Just your hands and your feet. It's insanely difficult but you can totally feel it working your muscles all over.

Lastly, we did some squats, which was a huge relief. Never did we think we'd be saying that squats were the easy part of a workout. This involved alternating between jumping squats and weighted squats. It was a great way to finish off the workout (followed obviously by - my personal favourite - a warm down.)

​It was the perfect workout in many ways. High intensity, but for a short amount of time (about half an hour). It's perf for those who want to tone up every part of their body without knowing quite how to do it. Plus, you'll leave the class really feeling like all your muscles have been really worked. You'll be feeling like that for days afterwards, too...

If you're ready to train like an angel, here's some more of Svava's VS exercises!

​For an Angel bum: beats

Come to a wide squat. As you squat watch that knees are in line with toes and are not caving in. Squat down deeply, then as you jump up engage your glutes and lengthen the legs fully, beating your legs together. Land in the deep squat and do it all again.​

Start on your knees until you have fully mastered this move. Placing your hands closer and further down the body than a normal press up, engage your core, lower yourself to the floor with elbows bending back and touching the side of the body. Keep the core from coming all the way down and relaxing on the floor. Bring your body back in one piece, the same as when you went down, with the insides of your arms are up against the side of your body.

Start by kneeling and bring your left leg forward with your foot down and a 90 degree bend at the knee. Press into the left heel and push yourself up to standing, lengthening the left leg and at the same time kicking the right leg high up. Control it as you come back down. Do not use the right leg at all to lift yourself up, only the left. Engage your core and use your power to kick that leg!

Get into plank position and place your feet on glides/towels/magazines. Using the upper body engage the core (make sure you keep the plank line through out the exercise) and then drag your body forward and backwards by walking your hands. Watch that you do not drop in the middle and arch your back.

Have you ever worked out like an angel? We applaud you! Tell us about it: @sofeminineUK

9 Things You Need to Know About the Victoria's Secret Diet