Could American Apparel Sink Any Lower? This Is Officially Their Perviest Campaign Yet

Slow clap to American Apparel. We didn't think it could happen, but they've out-perved themselves. As if we weren't all tired of their constant attempts to shock with their semi-pornographic campaigns, their latest, which shows an upskirt shot to sell mini skirts (because that's exactly what was missing from ads duh), is just plain sick.

Just to make this clear, this isn't a screenshot of those dodgy ads that pop up when you're streaming Game of Thrones (not that we do that obvz). This is an ad from one of the biggest clothing stores in the world, to sell mini skirts, and frankly we're repulsed.

But not surprised. This isn't the first time American Apparel has sought to shock with their desperate daring campaigns.

Here are just some examples of their past campaigns... 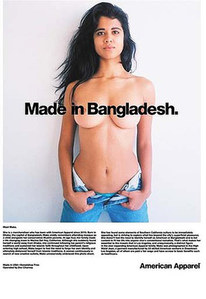 But it's OK right? You know, because sex sells doesn't it? So we all should definitely just shut up and buy into it. Well no. These kind of campaigns just perpetuate the idea that women's body's are there to be looked at and sold in any way possible. But they're not. And it's about time that American Apparel sorted their ideas out.

Plus the fact that in this particular advert you can't even see the damn skirt?!?

Do you agree? Tweet us @sofeminineUK and join the debate.

13 Of The Most Scandalous Ad Campaigns Of All Time