Home / Women in Focus / Key debates / What Does Facebook Tolerate More - Nudity Or Racism? The Answer is Depressing

What Does Facebook Tolerate More - Nudity Or Racism? The Answer is Depressing

by Tolani Shoneye Published on 5 November 2015 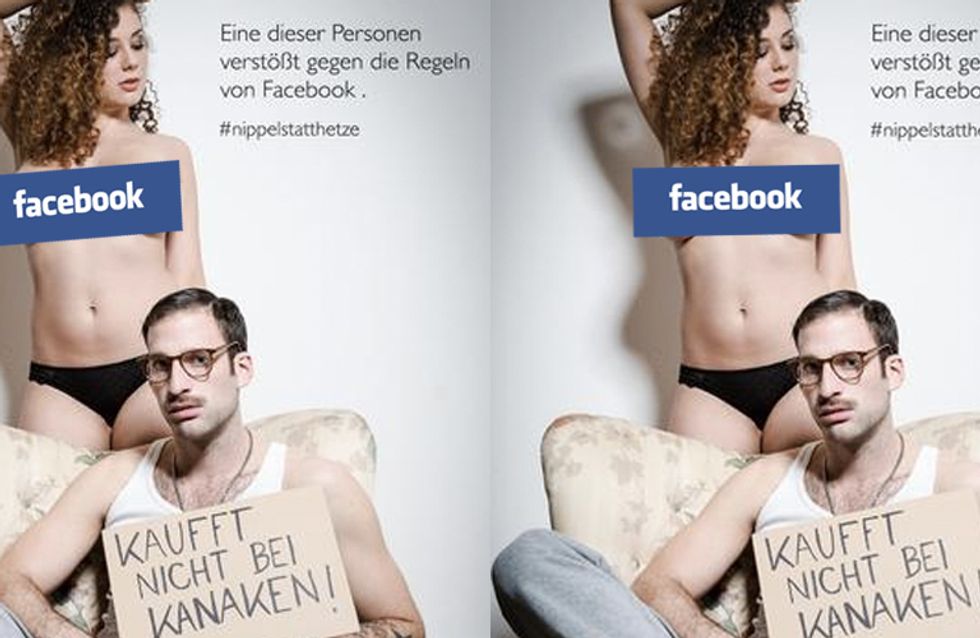 A topless woman or a racist comment, which would you find more offensive? Well a German photographer wanted to know where Facebook stood on the matter, and the answer is sure to depress you. *Rolls eyes*

If you took the time to read 'Facebook's Community Standards' you will see that it doesn't take sexual content or offensive content lightly. It states that "You can not post content that incites hatred or violence, pornographic or containing nudity or gratuitous violence," so you would think this means that it will remove content that showed nudity and racism, but apparently it doesn't.

German photographer Olli Waldhauer took a photo of topless woman, stood next to a man holding a sign with a racist comment written on it. The phrase when translated reads ‘Don’t buy from foreigners!’, using the word ‘kanaken’ which is a racial slur used against Turkish migrants in Germany.

This was proved when the same image was re-uploaded but with the lady's breast covered up. This didn't not get removed by Facebook. *SIGH*

​Olli Waldhauer said of the experiment: "I want Facebook to delete the photo because of its' racist content and not because of nudity." So do we Olli, so do we.

It's still so surprising to us that a women's nipple is deemed more offensive than racism. Do better next time Facebook. Oh and #freethenipple!

What do you think of Facebook's rules? ​Tweet us @sofeminineUK