by Alison Potter Published on 2 November 2012

Hollywood actresses are regularly rated on their looks by the film industry, but it seems that family members also think they can chip in too.

Gwyneth Paltrow won an Oscar for her role as Viola in Shakespeare In Love, but according to her grandfather her topless scene in the film would be nothing to write home about, because he thought her boobs would look like “two fried eggs”.

The wife of Coldplay frontman Chris Martin revealed that she was worried about what the older members of her family would think about her naked scenes in the 1998 flick, so she spoke to them about it beforehand.

But Gwyneth, 40, needn’t have worried about what her grandparents would think, as they were fairly unimpressed with her unshapely figure.

Gwyneth recalled: “In Shakespeare In Love I had to take my shirt off and be naked and I was worried because my grandad was a very conservative person. 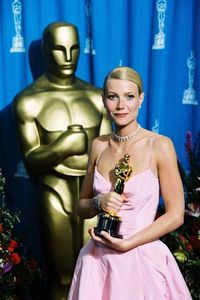 “So before he got in the cinema, I told him that I had to do it because it was a very important role for me and all that. And he just said, ‘Don’t worry, that will be like two eggs in a pan’.”

Despite his brutally honest observation, it was the role that set Gwyneth on the path to Hollywood superstardom.

Although the Iron Man actress admits she has very little memory of that time because she was too busy enjoying herself - and all the free booze!

The Emmy award-winning actress confessed: “When I won the Oscar I was really surprised, I can’t explain it, I couldn’t feel myself in my own body, it was unbelievable.

“I was just 26, I was too young. My parents where there for me, and they were so proud.

“At the party after winning the Oscar I saw the actresses who I was nominated with - I remember talking to Cate Blanchett.

“But nobody was upset or was unkind to me, although I was too drunk to notice anything.”

Celebrities revealing a little too much!