Lady Gaga is not giving up on her LGBT monsters, especially those living in Russia. Since Russia’s recent legislation to further restrain the promotion and support of gay rights, the superstar has been determined to change their way of thinking for good! And this time Momma Monster is targeting the 2014 Winter Olympics.

Tom Daley has stirred some major controversy since coming out - So much so, that mega gay rights advocate, Lady Gaga has been encouraged to once again step up for the LGBT community in Russia.

This time the star has bigger plans to make a difference. In a recent interview Gaga expressed her desire to boycott the 2014 Olympic games, which are being held in Sochi, Russia.

"To be honest, I don't think we should be going to the Olympics at all," Gaga told Carr in response to Tom’s reveal.

“I don’t know if my opinion is not highly regarded, in terms of the amazing champions and people that are rehearsing and training for the event… I mean I would never take anything away from their hard work, I just think it is absolutely wrong for so many countries to give money and economy in the way of a country that doesn’t support gays.”

Ironically, Gaga isn’t allowed in the country anymore. The star admitted the last time she was there she screamed: “I'm gay! Arrest Me!"

Gaga's dealt with a slew of legal issues in Russia before, more notably when she was warned she could face prosecution for violating the terms of her visa by performing. But this didn’t phase the “Born This Way” songstress.

Gaga took to Twitter to reiterate her support for the Russian LGBT community.

She wrote: “Why didn’t you arrest me when you had the chance, Russia? Because you didn’t want answer to the world?”

In another social media post Gaga goes on to express her support: “Sending bravery to LGBTs in Russia," she wrote. "The rise in government abuse is archaic. Hosing teenagers with pepper spray? Beatings? Mother Russia? The Russian government is criminal. Oppression will be met with revolution. Russian LGBTs you are not alone. We will fight for your freedom."

In the past, Madonna and Lady Gaga have been investigated by local authorities in Russia after a St. Petersburg legislator made a complaint about them propagating gay rights in the country.

Both, at the time, were granted cultural exchange visas that do not permit any commercial activity - including performances.

We’re right there with you Lady! Who’s side are you on?

What do you think of Gaga’s points on gay rights? Will Gaga dodge another legal bullet? Tweet us @sofeminineUK! 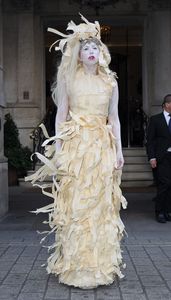 Lady Gaga goes on Twitter rant to address her haters

by the editorial team
+
All the news about Lady Gaga