Filming has started for Made In Chelsea Series 6 and we just can't wait for the latest instalment of West London drama. Andy Jordan has been talking about how he really feels about Spencer Matthews and just what's going on with Louise Thompson. Are they still going out post Horan-gate?

Andy Jordan has admitted that there is still some bad blood between himself and Spencer Matthews.

The pair came to blows after Andy wasted no time in pursuing Louise Thompson after she split from the notorious cheat.

He prefaced the dig with the claim that they all love each other really...

He said: "We actually all really like each other but really hate each other at the same time."

Sounds like a recipe for an argument or two - we're not complaining!

He went on to talk about the Made In Chelsea season 6 and promised: "The new series is more real than ever before."

And as for Louise Thompson, he insists the pair have made it through the summer and are stronger than ever.

Despite reports that she spent the night with 1D's Niall Horan, the couple are still "still together".

He gushed: "I love Louise and I will always love her and I hope she would say the same thing."

Sadly (for us), Spencer is also loved up with his new girlfriend Stephanie Pratt.

Louise has even met her and given her a big thumbs up.

She told Reveal magazine: "I didn't like her in The Hills, as she seemed at bit crazy, but she's totally not like that.

"If anything, Stephanie is one of the most normal and down to earth people in our group of friends. I really like her."

She went on: "I can't wait to see her on the show. Stephanie and Spencer are so loved-up. It's all good."

Urm...that doesn't sound like the weepy drama queen we all loved to despair at.

Maybe we'll have to count on Jamie for the drama - he's already admitted he's now single.

Quick, to the hot tub! 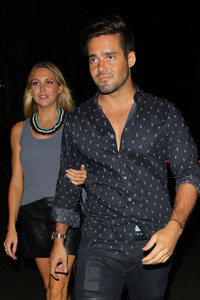