Weeks ago it was announced that the US premiere date for Sherlock would be January 19th, and a lot of UK fans were left disgruntled. “Where is our premiere date?” We cried, “will the Americans get to watch the show at the same time as us, we will see it first, or – heaven forbid – will they get to watch it before us?” Well, the date is finally here, it’s brilliant, and it was announced in the most awesomely creepy way possible!

The air date for Sherlock series 3 for the UK has been announced, and it will be on...drumroll…January 1st 2014, A.K.A News Years Day! Yes! Yessss!

Finding out about the premiere date was exciting enough, but one of the show creators Mark Gatiss has also taken to Twitter to tease fans about the highly anticipated episode. 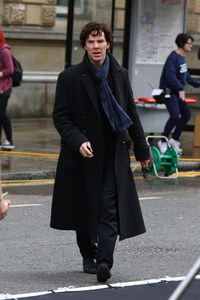 It was announced this morning - in a genius marketing strategy - with a hearse parked in London which had flowers in the back that read: “Sherlock 01 01 14”, then in the front window was the tag “#SherlockLives”, which was soon trending on Twitter afterwards.

Fans are particularly excited to find out exactly how Sherlock Holmes faked his death by jumping off the building at the end of season two.

​The news of the premiere date has been met with a storm of fan excitement on Twitter, with one user posting: “V clever to have Sherlock return on 1/1/14/ Whole country will be too hungover to poke holes in how he faked his own death #SherlockLives”, with another posting “OH MY SHERLOCK IT’S FINALLY HERE #Sherlock #SherlockLives”.

We would also like to point the locality of the parked hearse. The front of St. Barts where Sherlock jumped to his death? Genius BBC, genius.

For an extra bit of excitement as well, it appears that the first two episodes of Sherlock are going to air only four days apart, as the first episode will be on Wednesday 1st before the next two episodes are moved to the traditional Sunday evening slot.

So we’ve had trailers, we’ve had the synopsis, and now we have the airdate. All we need now is a countdown for the big day! New Years Day is to be celebrated for a whole new reason this year people!

Are you looking forward to it? Tweet us @Sofeminineuk

Emmy Griffiths
…
Sherlock
For all the best videos, memes and shareable news!