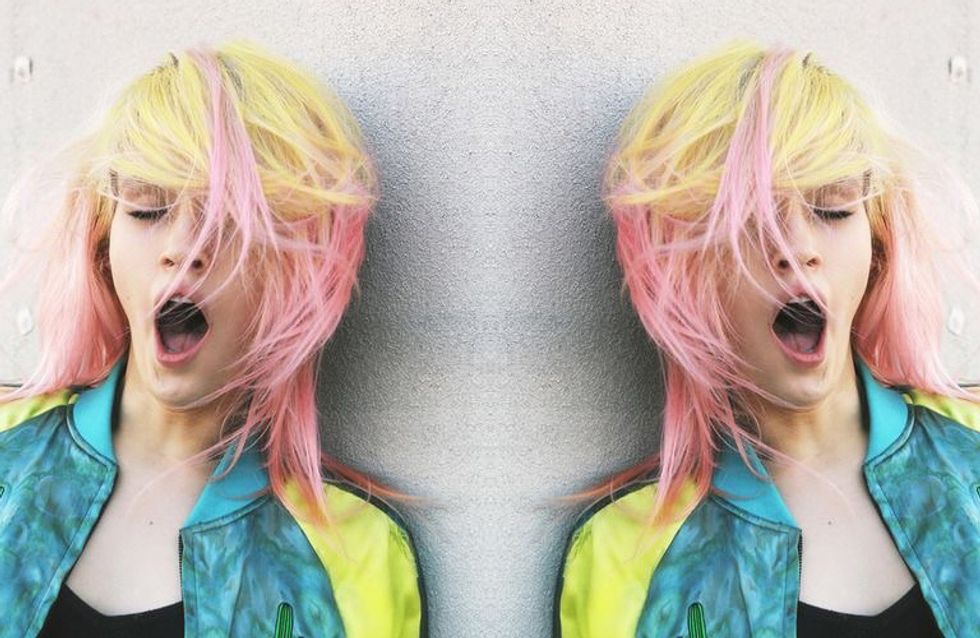 There's no getting away from it, we're all cray cray weirdos in our own way, but we're in this together. Chances are we're not even aware of these inexplicable things we do on the daily, from unbreakable habits to downright social awkwardness. If you thought it was just you, luckily you were wrong.

You know, to make the person aware that there's someone else in there, should they want to poop without shame or embarrassment.

Handing over your carefully counted change at the checkout and waiting for permission to leave...

Being unable to hand over said change without counting it at least twice and saying, 'I think that's right'.

4. Yawning even though you don't need to yawn

Awkward silence? A yawn will make everyone more comfortable.

And either avoiding the security guard or overly smiling in his direction to convince him, and yourself, that you're entirely innocent.

6. Tapping the top of your canned drink ... just because

Because one of these days you're going to forget to tap it and BAM: Diet Coke EVERYWHERE

7. ​​Overtaking someone when you're walking

And then trying your hardest to keep up that godforsaken impossible pace without breaking your shins.

It doesn't matter how many times we scuff our feet on a lumpy bit of pavement, we still look back, frown firmly in place, to check what the hell it was that just tried to kill us. Somehow it just makes us look smoother.

9. Being unable to leave without saying 'righhht'

Nothing wrong with an Irish goodbye but somehow a precursory 'righttt' is way less aggressive.

10. When you misheard someone for a second time

It's done, game over - you just have to laugh and nod now.

11. When you pretend you're in a music video

All. the. time. At the gym, in the car. Beyonce goes wherever I go.

12. When a policemen is anywhere near you

14. When you're in the car and go through a tunnel

You're weird if you do not hold your breath.

16. Counting the number of stairs

17. Keeping the volume on an even number

When new people come round your house and you have to explain to them that this is who you are.

18. Still being incapable of saying the alphabet without singing the song

It's a GOOD song OK.

19. Opening a birthday card and try trying to keep cool when you see da money

And then staring at it, pretending to read the lovely words.

20. When you make a noise that sounds suspiciously like a fart

And you have to try and recreate it so everyone's clear that IT WAS NOT A FART.

21. When you call someone's name or ask a question twice and they still don't respond

You just slowly sink down in your seat and act like nothing's happened. But people know.

22. Gearing yourself up to go through those airport body scanners

That special sheepish walk you do, no one needs to see that again.

Ain't nobody got time for bad luck.

24. Checking the fridge over and over again

This time there will be food.

When you and everyone else knows full well it was seen at least 3 days ago, so stop lying Linda.

26. Knowing you've definitely turned off your straighteners but going back to check

Because the minute you're outside you doubt everything you've done that morning.

You just say oh yeah yeah and then when they actually ask you stuff about specific scenes you have nothing to contribute because you were weird and lied.

28. Trying to open the fridge just the right amount so you can catch it with the light off

Twenty minutes of your life you'll never get back.

29. When you randomly start doing accents

30. Complimenting people when you don't know what else to say

​Owners? Not so much.

32. Jabbing your finger in someone's mouth when they yawn

Still funny. Until someone does it to you.

33. Asking if anyone wants anything...

And then being both shocked and annoyed when they actually do. Gah, it was supposed to be rhetorical.

What weird stuff do you do? Tweet us @sofeminineUK!

22 Things Everyone Who Lives To Sleep Will Understand

​22 Stages Every Girl Goes Through In Primark