by Vivian KELLY Published on 16 October 2014 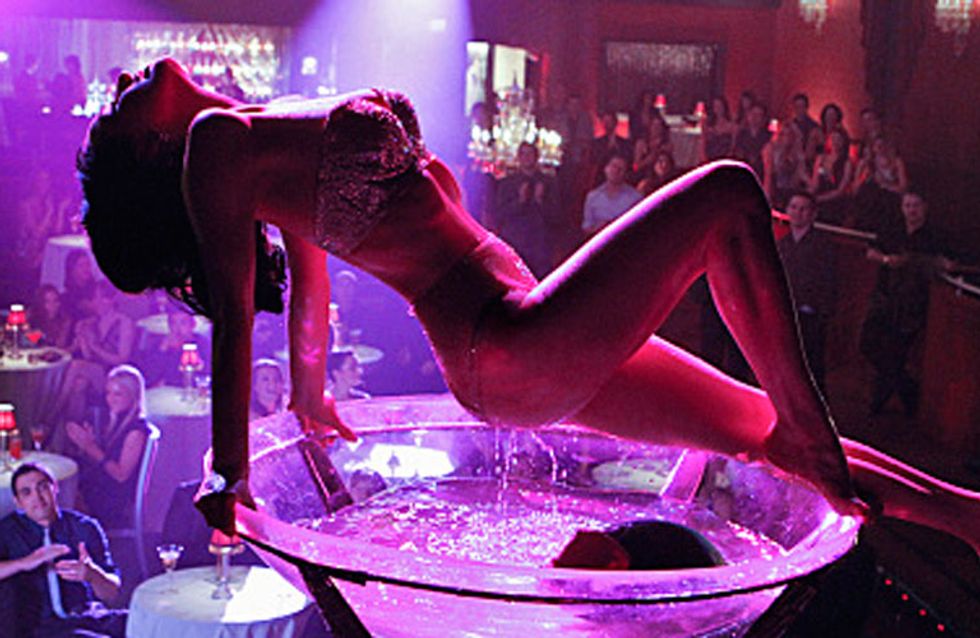 Ever watched a troupe of baby-oiled hunks shaking it off to Sex Bomb? Or a sexy female stripper offering up lap dances and working the pole? Maybe we’re on the spectrum, but these girl strippers are HOT and more so than their male counterparts! Don't get us wrong, we love gorgeous half naked men but lets face it’s more funny than sexy, right? Here are the REAL differences between male and female strippers (and why our BFs shouldn't be worried)…

Whether you'e at a bachelorette party, a friend's birthday or just feeling a little curious there's a time and a place for a stripper. And having experienced watching both male and female strippers myself, I have to say there's a totally different dynamic between the two.

When you watch beautiful women stripping off and strutting their stuff on the floor there's something mesmerising about it. And damned sexy. But when it comes to big headed male strippers (sorry guys) we're usually laughing so hard we cry. I mean come on, when a man starts swinging his junk around they can't seriously think we're turned on by that, do they?

So if your man ever complains that you seeing a male stripper is just as bad as him going to a strip club, it's time he thought again. They're just not even in the same league.

Ladies, here are the real differences between male and females strippers. ​

Luckily our lady bits our nicely tucked in, but men? That's a different story. What I'm really confused about is why male strippers think their flappy penis is even remotely sexy! Seeing his sausage spin around is not exactly horn-inducing. But for guys seeing women show their rude parts in the buff? They'll have a guaranteed boner in their pants.

Massive props for spending half your life at the gym. Trust, we like seeing male strippers pour hot wax down their hard rock abs - it's pretty tasty but when they're wearing a little bow tie and a thong to match, the sex appeal fades FAST.

3. FEMALE strippers know how to work it

Female or male, any type of grinding is hot but female strippers knows how to move in ways NO man knows. By far. Note to the lads: don't even think about tea bagging us. We WON'T be laughing.

I guess the idea of it seems sexy, but in REAL LIFE when a man has less hair than you, it's a deal breaker. Women love a man's chest hair just like we love their beards.

5. FEMALE strippers know how to work the pole

We love watching women have their way with the pole. You can't even compare it to male strippers - if you’re not turned on you will undoubtedly be hypnotised by a sultry elegant striptease. Ain't nothing graceful about a male stripper.

6. MALE strippers are too touchy feely

Women can thrust on us a little and we won’t budge, in fact not gonna lie, we might actually like it a little bit. But males on the other hand, just no. Please don't place our hands on your bum, put your appendages in our faces and touch up our breasts. This is touch-free zone boys - hands off. Perving on girls should NOT be a perk of the job.

7. FEMALE strippers aren't perfect and we love it

There’s beauty in seeing a woman so comfortable in her own skin. It’s praise-worthy, it’s hot, it’s downright sexy. Can you show us how?

Male strippers make us cringe HARD. We hoot, scream, laugh but not because we want them! It's more to do with the shock factor (you know, the flying penis in your face? The cowboy boots and hot pants? Their obsession with their own guns!)

It's a different atmosphere altogether. Women are out to have a good time while men, when they're at a stripper show, are sat front row fantasising about what he wish he could do to her. That's SO not our thing.

Male strippers will dress up as firefighters, put props over your head (to make it look like you’re giving them a blow job) and dry hump you like no other.

Female strippers on the other hand, blind fold you, sit on your lap and seduce you without going through half the lengths that guys do. And, it works.

To the point that all their sex appeal is stripped away from them, literally. Female strippers seem to have a better handle of this (ergo, the hotness).

Male strippers love to people please, or so they think. The amount of times I've seen them pushing women's faces into their crotch, dry humping them or giving us a sexually aggressive lap dance is well, common. It's amazing how male strippers, (although an object themselves) still manage to objectify women even when we're the one's watching! We're encouraged to touch, even when we don't ask for it. It's crude.

Female strippers don't do that, nor are we allowed. Which is probably why a lot of women are more comfortable watching female dancers than male dancers.

Case in point? Watching male strippers is purely for entertainment, as is with female strippers, but I have to admit, females have WAY more sex appeal. If we're out to watch a group of male strippers we might go for the laughs, but the only one we really want to have our way with is our geeky hairy boyfriends. Don't get me wrong, male strippers are smoking hot, but they're more like the fantasy we never want to come true.

And men's experience of strippers on the other hand? It's kind of something we don't wanna even think about.

What's your take on men Vs. women strippers? Tweet us @sofeminineUK!

Green Eyed With Jealousy & Hating On Life? 15 Signs You're Having A Quarter Life Crisis