The New Faces Of Feminism: The SoFeminine Men Behind The HeForShe Campaign

The men who work at sofeminine may be behind the scenes, but they're also behind the #HeForShe campaign.

Following Emma Watson's incredible speech launching the HeForShe campaign, something incredible has been happening on social media. The world is starting to listen to the true meaning of feminism; not man hating, not women first, but equal opportunities for women.

Emma Watson's speech focused on how feminism has been too long associated with being anti-men when the true definition of feminism is inclusive with one true goal. She opened her speech with the following:

"​For the record, feminism by definition is: 'The belief that men and women should have equal rights and opportunities. It is the theory of the political, economic and social equality of the sexes,'" she says.​

​"I want men to take up this mantle. So their daughters, sisters and mothers can be free from prejudice but also so that their sons have permission to be vulnerable and human too—reclaim those parts of themselves they abandoned and in doing so be a more true and complete version of themselves."

And that's exactly what the guys in our workplace have done.

Check out the feminists in our office: 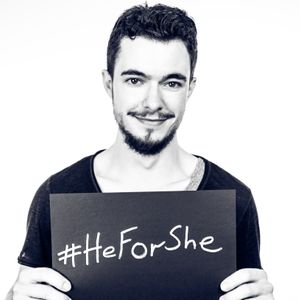 The Sexist Hashtag #HowToSpotAFeminist Has Totally Backfired & It's Brilliant!