Why Staying Up Late Can Be Toxic For Your Health

by Emma Goddard Published on 26 February 2015 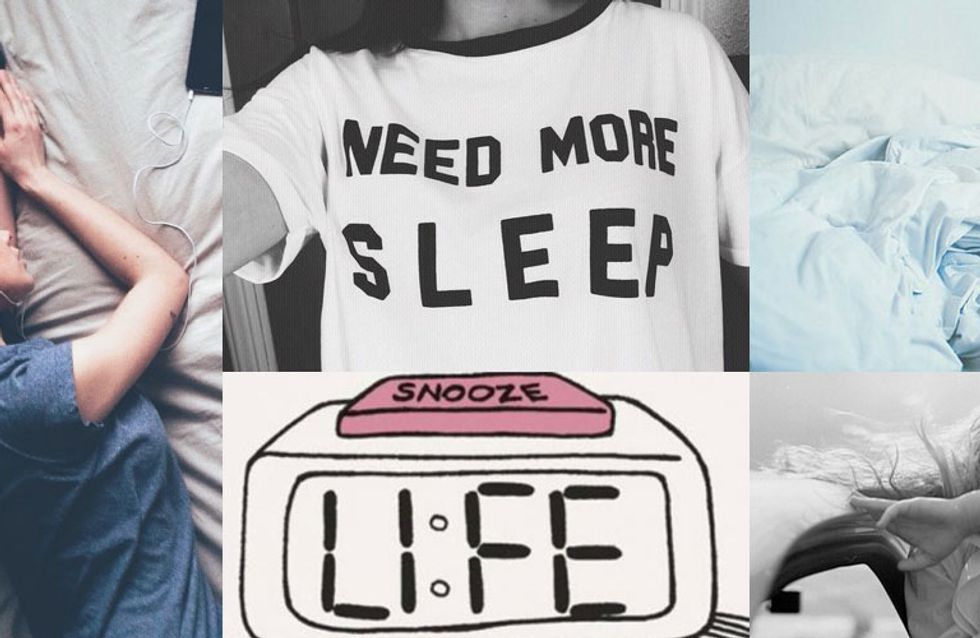 Every morning, I wake up wanting to curl up in the cocoon I made for myself with my duvet and go straight back to sleep. I snooze my alarm at least three times and chug down several cups of coffee upon arriving at work. This may be because I've been a night owl for years, hitting the sheets anytime between 12 and 3AM on a normal night. Unfortunately however, for me and my fellow late nighters, staying up late could actually be toxic to a person's health for so many reasons...

Oh lord, don't even ask me how many times I've stayed up late studying for an exam or browsing through Pinterest while simultaneously snacking. Although I've mostly gotten rid of this habit since graduating, it still occurs every so often. Yet despite knowing that staying up late could result in weight gain (and oh it did), I continued stuffing my face at night anyway.

Unfortunately, this is an issue for almost everyone who stays up late at night. In fact, "people who go to bed late and sleep late eat more calories in the evening, more fast food, fewer fruits and vegetables and weigh more than people who go to sleep earlier and wake up earlier," according to a study from Northwestern University Feinberg School of Medicine.

Yes, that's right. Sadly it's possible for late-night sleepers to eat 248 more calories a day than those who get to bed at a decent hour, and all of that can lead to about two pounds per month.​ Although co-lead author Kathryn Reid admitted that the study and research couldn't confirm whether or not people choose poor food options at night because they're night owls or simply because those specific, unhealthy options are the only ones available, the correlation between weight gain and the time participants went to sleep was prevalent.

You're Probably Not Getting the Recommended Hours of Sleep

Many of us often hear that it's good to get at least eight hours of sleep, and according to Janet K. Kennedy, Ph.D., clinical psychologist and founder of NYC Sleep Doctor, adults should attempt to get at least seven to eight and a half hours of sleep every night, though she does admit that this rule can sometimes backfire.

"The eight-hour recommendation is often taken literally, which contributes to performance pressure and anxiety," Dr. Kennedy says. "Sleep quality is best when it occurs within the body’s natural circadian rhythm. If a person has a circadian rhythm timed for later nights, he or she would be able to get good quality sleep at those times. The real issue is one of sleep deprivation when the circadian rhythm is at odds with schedule demands."

​So if a person truly can’t fall asleep before midnight but has to routinely wake up early, it's likely that sooner or later they're going to feel seriously sleep deprived.

When I was in school, the latest I'd stay up was typically 11PM and occasionally, midnight. For the most part however, I'd get my rest pretty early in the night. Yet once I went to university, it was all downhill from there. As in, every night was a late night and I'd usually only get eight hours of sleep on Fridays and Saturdays. And, unsurprisingly, with my lack of sleep came cold after cold.

According to a study in the "Cancer Research" journal from researchers at the University of Chicago and University of Louisville, "Poor-quality sleep marked by frequent awakenings can speed cancer growth, increase tumour aggressiveness and dampen the immune system’s ability to control or eradicate early cancers."

​A lack of sleep has often been linked to a poor immune system, so it's no wonder that so many uni students, and night owls in general, get sick so frequently.

Melatonin Production Can Be Affected

In relation to a lack of sleep potentially bringing about various illnesses in your life (cancer being one of the most extreme possibilities), when people don't hit the hay earlier in the night and get less than the recommended hours of sleep, their melatonin levels can go down.

According to the University of Maryland, melatonin is a hormone that "helps regulate other hormones and maintains the body's circadian rhythm," or in other words, your body clock, and "when it is light, the production of melatonin drops."

So while it may be different for someone with insomnia who just can't go to sleep even though they're laying in bed in the dark, for a night owl who stays up late gaming, revising or binge-watching TV shows, the light proves to be detrimental. With modern technology, all that glare can actually be hurting your sleep. So if you want to get some ZZZ's and improve your health, try turning off your phone a few hours before you go to sleep and avoid watching any TV beforehand as well.

You Can Be Prone to Negative Thoughts & Anxiety

Jacob Nota and Meredith Coles of Binghamton University published a study said, "people who sleep for shorter periods of time and go to bed very late at night are often overwhelmed with more negative thoughts than those who keep more regular sleeping hours." According to the study, it's more likely for those who go to sleep later to experience repetitive negative thoughts that they can't seem to ignore and to dwell on various issues in their lives even if they're minor.

There's a Risk for Sleep Disorders

People across the globe experience sleep disorders, whether insomnia, sleep apnea or narcolepsy. Even having nightmares or sleepwalking are categorised as asleep behaviour disorders. Yet before you panic that your late-night sleeping might be associated with a disorder, first make sure that you don't actually just have a bad habit. That is, are you really trying to get to bed earlier and just can't fall asleep, or are you just putting your sleep at the bottom of your list of priorities?

Knowing the Difference Between a Bad Habit & Insomnia

Although it's possible for many people to experience insomnia at some point during their lives, there's a major difference between having an actual "sleep phase delay" disorder and simply just having a bad habit.

"If being a night owl is just a habit, setting a consistent wakeup time will help the body adjust to an earlier bedtime again," Dr. Kennedy says. "That’s also different from insomnia. Most people have periods of insomnia at some time during their lives. It's normal to have difficulty sleeping during times of stress, change, loss, illness and trauma. Sleep typically rebounds when the stress resolves or diminishes.

​But some people develop anxiety around sleep and coping strategies that keep the insomnia in place for longer periods. For example, sleeping late after a rough night, napping, and/or going to bed too early to compensate disrupts the body clock and keeps the problem in place."

How To Fall Asleep Fast! Sleep Solutions For Every Type Of Person

15 Thoughts Everybody Has When They Can't Sleep

Pulled An All Nighter? 15 Ways To Survive On Less Sleep

Follow us on Pinterest!
You might also like
Positive Quotes To Get You Through Your Day
by Pascale Day
17 Celebs Who Have Spoken Out About Their Mental Health
by Pascale Day
Turns Out Coffee IS Good For You! The 10 Secret Health Benefits
by Vivian KELLY
Happy World Vegan Day! I Went Vegan For A Week And This Is What I Learned
by Pascale Day
How To Stop Sleep Paralysis And Prevent Those Nightmare Hallucinations
by Emma Goddard
5 Reasons You Need To Sleep Naked
by Cliche Wynter
Pulled An All-nighter? 15 Ways To Survive On Less Sleep
by Vivian KELLY
I Trialled The Latest Detox Treatment And It Made Me Feel Zen AF
by Helen Turnbull
How I Turned My Spa-phobic Boyfriend Into A Massage Fanatic
by Pascale Day
Why Am I Not Losing Weight? 10 Ways To Make Your Workout Work
by Maria Bell