Home / Health and Fitness / Health / Due A Smear Test? Everything You Need To Know About Cervical Cancer

Due A Smear Test? Everything You Need To Know About Cervical Cancer

by Vivian KELLY Published on 26 January 2016 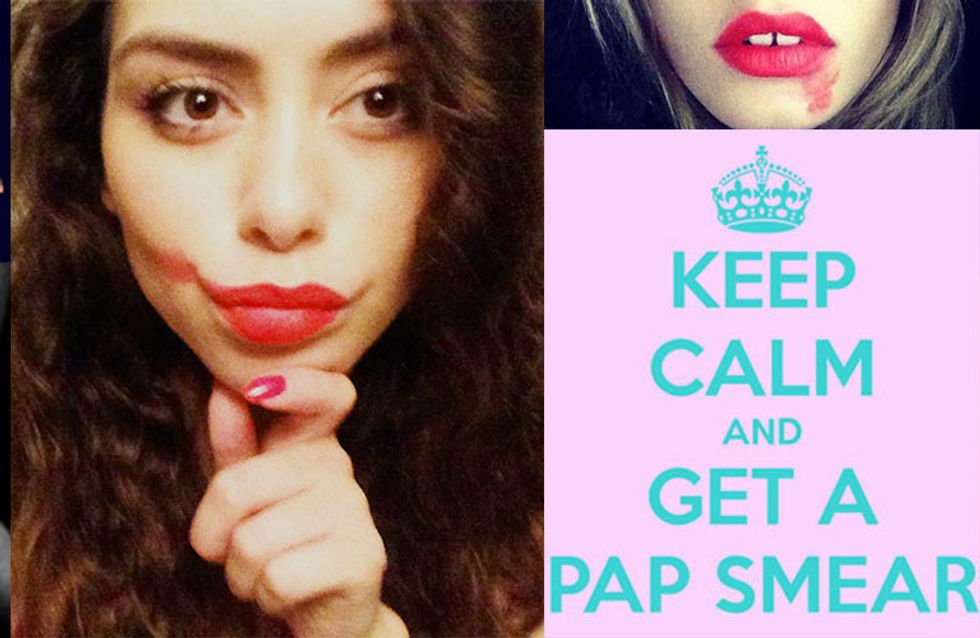 Cervical cancer is more prevalent than you think. In fact, it’s the most common cancer in women under 35 yet we're still giving it the cold shoulder. And the numbers prove it. There are 1.4 million women in the UK who still aren’t showing up to potentially life-saving smear tests. Ladies, it’s time to get clued up. To mark cervical cancer prevention week, here’s everything you need to know about this devastating disease...

Cervical cancer is no joke. The disease develops when abnormal cells in the lining of the cervix grow out of control. If left undetected they can spread to the surrounding tissue causing what we know as cervical cancer. The good news though is that it’s largely preventable and if caught early it has a very good chance of cure.

Smear tests can detect abnormal cells on the cervix before they turn into cancer, yet out of millions of women invited for an exam last year, a huge 1 in 4 did not attend. And the numbers are dwindling year on year. The scary part? The single most effective way for you to really prevent and detect the disease is through a routine pap.

The human papillomavirus (HPV) is a viral infection passed between people through skin-to-skin contact. And get this, it’s one of the most common sexually transmitted diseases in the country and the main culprit for genital warts. What we haven’t told you is that it causes nearly all cervical cancers, which is why we need to start taking action for our health. But first, a little education. We spoke to the health professionals to ask the hard-hitting questions about cervical cancer. Here are their answers…

What are the signs and symptoms?

Looking for signs and symptoms of any cancer can be a daunting thought, but if it can potentially save the life of a friend, a family member or your own, it’s important that you educate yourself on them.

Consultant Gynaecologist at Bedford Hospital, Mr Jullien Brady says, “Cervical cancer is most often symptomless in its pre-cancerous and early stages, which is why cervical screening is so important.”

In the UK, all women over the age of 25 (who are registered with a GP) are invited for a pap smear every three years. Women aged 50 to 64 are invited every five years. Attending your screening should be at the top of your ‘to do list’. Early detection and treatment can prevent 75% of cancers developing. If you don’t receive an invitation by post, make sure you’re registered with a GP and book the next available appointment. It’s that simple.

Some women, however, do experience signs. Dr Brady adds, "symptoms such as bleeding after sex, bleeding between periods, unusual vaginal discharge or pain during in sex" are all signs that something is out of whack. If you’re experiencing any of these symptoms, it’s important that these are investigated by your GP.

How can I prevent cervical cancer?

The only real way of preventing cervical cancer is by having no sexual partners, which for many is too late. HPV is so widely spread that most of us have already been infected. But there are ways to reduce your risk.

Practice smart sex and use a condom: Unless you’re in a long term relationship make sure to use a condom. This can help reduce the risk of spreading HPV. It still doesn’t provide 100% protection, but certainly reduces your risk.

Get vaccinated: If you weren’t already vaccinated in school you may want to consider getting the HPV vaccine. Even though you’ve had sexual partners, many Doctors agree that there are still significant benefits of the jab. One being that you may have not been exposed to the virus in the first place, let alone, which sub-type (the vaccine only protects you against two sub-types: 16 and 18).

Go for your pap smear: Ultimately, this is the most effective way of preventing cervical cancer. Bottom line.

What’s the deal – does a pap smear hurt?

Why are so many of us dodging our smear appointments? Research at Jo’s Cervical Cancer Trust found 26.2% of 25-29 year olds were worried their smear test would be painful, 26.6% worried it would be embarrassing and 29.5% think cervical screening is not important to have regularly.

Once you're stripped down the Doctor will gently insert a speculum (a device used to open your vaginal walls). It feels slightly uncomfortable but trust me, bikini waxes are so much worse! Breath, relax and before you know it, you’ll be done. The procedure is done in less than a minute.

​One thing I recommend is to request a female doctor. I’m all for male Doctors but when it comes to my lady bits the only man going near them is my partner. Women just relate. (We. Have. The. Same. Things.)

If I’m already sexually active – is it worth the prick?

All girls between the ages of 12 to 13 are offered HPV vaccination through the NHS, long before she is sexually active. You can get it up to the age of 18 but after you have to pay up. Unfortunately, most of us don’t even know we’ve been exposed to the virus. The epidemic is so prominent that most sexually active women and men get infected at some point in their lives. Which raises the question: is it worth getting the vaccine if we're sexually active?

Consultant Gynaecologist at Spire Bushey Hospital, Dr Malcolm Padwick says, “The HPV vaccine works by allowing the woman to develop immunity against the virus, such that when she comes into contact with the virus she immediately produces a response to clear the infection.

“If she has already been exposed to the virus then the infection is present within the cells of the cervix, the vaccine does not seem to have any beneficial effect. However, those women who are sexually active are still likely to get significant benefit from being vaccinated, as this is likely to produce immunity against HPV sub-types that the woman has not already been exposed to, although the maximum benefit is obtained by having the vaccine before exposure and therefore before sexual intercourse begins”.

From the age of 15 you will have to undergo three doses of the vaccine as the response to two isn’t as effective. Talk to your GP about whether or not the vaccination is suitable for you. Remember even if you are vaccinated you should still go for your screening as the vaccine only protects from two HPV types (the two known to cause around 70% of cervical cancers).

I have abnormal test results – what does this mean?

Getting a positive result on your pap smear can be scary as hell, but the good news is that you’re in very good hands.

Consultant Gynaecologist at Nuada Medical, Dr Angus McIndoe says, “An abnormal smear test suggests that possibly you have an abnormality in the skin of the cervix, which if left, over a period of years, may become a cancer.

“If the smear is abnormal, it is important to have a colposcopy to look at the cervix in more detail to assess the degree of abnormality. Over 80% of abnormal smears are because of low grade changes and almost all of these will go away by themselves without any treatment.

But don’t worry. Dr McIndoe adds, “even if the abnormality turns out to be high grade, it is very easy to remove the small piece of skin that is abnormal and this will make your smear go back to normal.” All you need to do is make sure you show up for your routine smear!

Support Sofeminine in our fight against cervical cancer. Jo’s Cervical Cancer Trust have now launched their 2016 #SmearForSmear campaign aiming to encourage more women to go for their smear tests. Back them up by posting a smeared lipstick selfie on social media and tagging #SmearForSmear.

Jo’s Cervical Cancer Trust is the UK’s only dedicated charity offering support and information to women of all ages and their loved ones affected by cervical cancer and cervical abnormalities. The National Helpline is on 0808 802 8000.

Test yourself for cervical cancer – at home

STDs: all about sexually transmitted diseases