Long-Distance Marriages Are 100% Sustainable & Better for Your Health 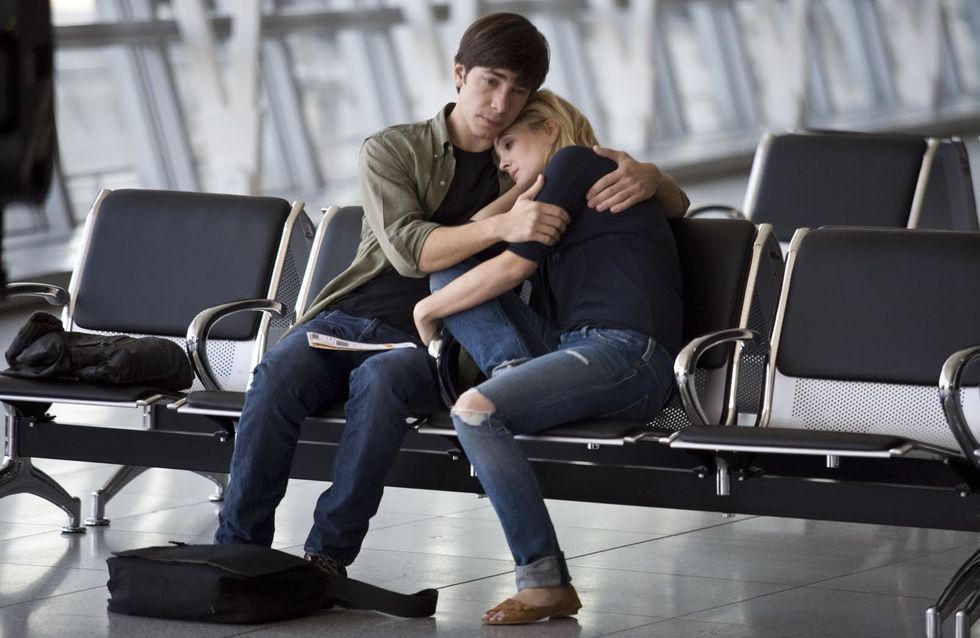 When you see your spouse every day, frustration and bickering are bound to occur. Driving each other up the wall is inevitable, and every so often giving one another space is essential for a healthy marriage. What would happen, however, if that space meant months or even years apart? What if, in fact, you had a long-distance marriage? Well, according to a new Northwestern University study, commuter marriages might just be better for both mental and physical health.

While we're not encouraging you to abandon ship with your proximal marriage, if you're long-distance already, sit back and enjoy yourself. According to the study, which surveyed 296 people in either long-distance marriages or those who were not, participants who were away from their spouses for longer periods of time reported better overall health. Although Steve Du Bois, the study's co-author, noted that long-distance couples still had certain problems like higher stress levels over personal issues with their spouse, these couples reported lower anxiety levels, lower depression levels, less fatigue, better diets, and more frequent exercise.

So although that isn't to say that their situations are obstacle-free, it does appear that long-distance marriages are quite successful for numerous reasons. For one, according to Marriage Consultant, Coach and Licensed Marriage Family Therapist, Lesli Doares, with miles and miles separating a couple, all the little things that typically cause tension in a relationship — whether that's simply who gets the TV remote or who's responsible for dinner that day — don't exist.

"When [commuter couples] see each other they’re back in the dating [mode] like, 'Oh we’re on our best behaviour, we’re together for a weekend or four days, and so we don’t want to bring any potential problems or issues,'" Doares said. "So in some cases I think that allows people to be a little healthier because [they're] not trying to resolve how to live with another person."

News Producer Barbara Friedman, who was married for 30 years, knows all too well about recognising those brief, but valuable moments during a commuter marriage.

"When you only see each other on weekends, you tend to cherish that time together more," Friedman said. "You're excited to see each other and have so much to catch up on. Every moment is precious. That means that you try not to sweat the little stuff, and you don’t nag at each other as much as you would if you were with each other on a daily basis. It also means that things that might get on your nerves tend to seem endearing, rather than annoying."

Living in different cities as a result of their jobs, Friedman and her husband were long-distance four times with the longest separation lasting five years. Though they saw each other every weekend, long phone calls every night proved to be beneficial for the relationship as well. Now, with the latest technology, long-distance marriages like the one Friedman had have become even easier with things like Skype and FaceTime.

However, with any relationship there are highs and also lows, and according to the Northwestern University study, while commuter couples experience better overall health, they have issues with "relationship maintenance." And unfortunately, technology can actually contribute to that.

"[Technology] makes repair efforts a little bit harder because if you have sharp words or a hard conversation, you can't come back later and give them a kiss or put your hand on their shoulder," Doares said. "You can't connect in a physical way."

Doares further explains that a person's "love language" can either make or break a relationship.

"Your love language [can be] physical touch or quality time, or even acts of service," Doares said. "Being far away, is nice if somebody says, 'I love you,' but if my language isn’t words then it’s not going to have the same meaning behind giving me a hug or a nice gesture. And again some people are going to do commuter relationships really well and other people aren’t."

Colleen Brownlee however, did it well. A military wife who has been married almost 35 years, Brownlee spent a great deal apart from her husband Col. Dan Brownlee (retired) at the beginning of their marriage when he first began training for about six-weeks at a time. This continued until Dan was eventually deployed during the first Gulf War, which separated the pair for about 15 months. Although the distance, raising two children, and the circumstance of war were undoubtedly difficult, Brownlee credits her background as a former service member, having been a third culture kid, and staying busy for helping her while Dan was gone.

"Honestly, had we lived in the same place all our married lives and had always been together I'm not sure I would be who I am today," Brownlee said. "Living apart allowed for personal growth. [Commuter couples] learn what is really important and how to help each other grow."

Being unable to have a traditional, proximal marriage was "a natural sort of progression" and an unexpected opportunity to learn more about herself, according to Brownlee.

Doares agrees, noting that while commuter marriages like Brownlee and Friedman's can make it more difficult for a couple to build a life together, it's a helpful way to explore independence, learn how to be trusting, and to work on honest communication. Furthermore, if both parties agree from the beginning that their long-distance relationship is the best option for the relationship, they're already headed toward success.

"What gets a person through is ordinary things like making sure the children are fed, clean, loved and off to school," Brownlee said. "Then there are the chores of keeping a home going along with the unexpected things that pop up. You cannot be a mother and a community activist and fall apart because your husband is doing a job. You learn how to deal with what is in front of you and leave the what ifs' for later."

Although this type of union might not be for everyone, with this new study and many couples beyond it who are living proof of its findings, long-distance marriage is looking better and better.

Are you in a long-distance marriage? Tweet us @sofeminineUK!

'White Weddings': How the Glam-Set Get Hitched:

That Time My Boyfriend's Mum Caught Us In the Shower

The Ultimate Wedding Checklist: What Every Bride Needs for Her Big Day