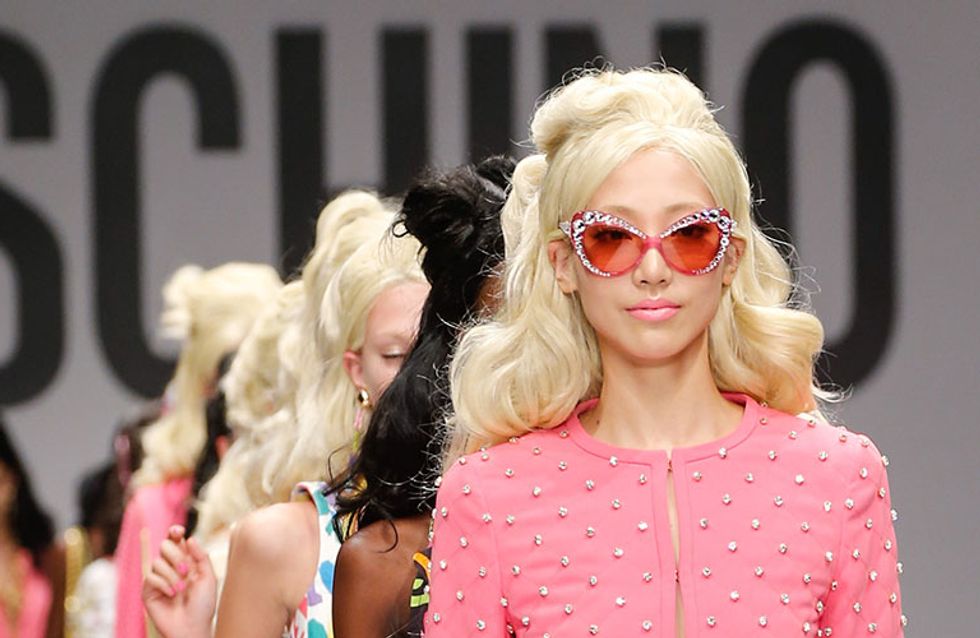 Bye, bye heels and tons of makeup! Now that fashion month is finally over, we can go back to obsessing over the more pressing issues in life, namely #XFactor and Downton Abbey. But before you get too comfy on that sofa, take out your notepad and jot down these uber important lessons we learned in the last few weeks of style mayhem. Cuz you know, fashion is serious, guys.

This season Chanel swapped the supermarket theme and went the political protest route.

Newsflash: being a feminist is now chic! (About damn time).

2. North West Is More Fashionable Than We'll Ever Be

And she legit doesn't even care.

But really, what man (gay or straight) isn't madly in love with her? His Balmain Spring 2015 collection was inspired by a photo of him and RiRi. More specifically, one where she rocked a mesh top sans bra. Very groundbreaking stuff.

4. Models Are Gorgeous Without Makeup

Marc Jacobs was, get this, bold enough to send his models down the runway with nary a mascara in sight. Shocker: they were all still incredibly gorgeous.

5. Miley Cyrus Is Not A Great Jewelry Designer

They were bleached into oblivion. But guess what? They do not make the woman!

7. Hailee Steinfeld Is The Queen (Non-Negotiable)

8. It's All About Baby Hairs, Dahhhhling!

Hopefully you all have your gel and toothbrushes handy.

9. Kanye Is The Goodwill Ambassador Of Normcore

10. Hats Are Bigger Than Ever Before

It's all due to Pharrell's impact, to be honest.

Awesomeness ensued at their presentation.

12. Masks Aren't Only Reserved For Halloween

Which is great to know, you know? Thanks, Alexander McQueen Spring 2015!

We thought Gemma Ward had left the fashion world for good. Then, much to everyone's delight, she came strutting down the runway for Prada! Jaws dropped.

Jeremy Scott gets it.

Schooling the models at Alexander Wang on how to twerk? Mild day.

18. Age Ain't Nothing But A Number

Trainers paired with fancy skirts and dresses might seem wrong. But who wants to be right when you can be comfy instead?

...and nothing is as fetch as sleep.

Side note? We also learned about these core trends for next season. Time to get saving...