Why the French are the passionate nation - or are they?

by Elizabeth Kesses Published on 8 April 2011 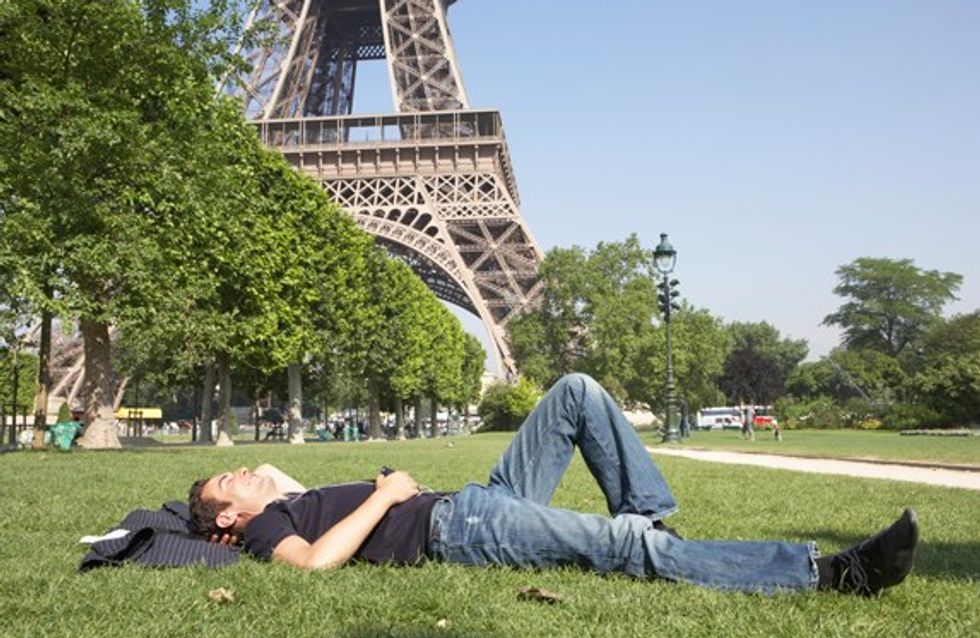 If you ask any Brit to describe a Frenchman it would be this: a short guy with a handlebar moustache on a bike, beret on a mop of black hair, baguette under his arm and a string of onions around his neck.

French men: As passionate as we English girls think?

Oh... and that he's on route to see his lover - as clearly all the French can think about is sex.

Brits fight world wars and the French seduce. So when I moved to Paris it was with trepidation. Was this obsession a myth? Within my first week I came across concepts such as Crazy Horse burlesque, les Chandelles and of course les Folies Bergeres all with an appetite for eroticism.

Lingerie shops lined every road hinting at activity after hours. I even ventured into a posh sex shop where everything was edible - even candles turned into sensual massage oil. One evening during peak TV viewing we came across a chat show about relationships - was one long term partner enough?

Liberal theories were discussed such as all mammals are unfaithful and that libertinism is great if a shared experience. I was intrigued and wanted to know more so I decided to widen my investigation further.

One straight up taxi driver had an interesting theory. He explained when you first date a girl it is like buying an iphone. All shiny sexy and new. But after years of living together it turns into a crappy cheap Motorola. The deal was an iphone. And if you don't have one any more you will go find on elsewhere.

I observed women too, on many nights out, and felt that many were trying too hard be sexy. Pouting, super skinny, glossy haired blondes looked hot but with zero sex appeal. They shifted from one heel to another like birds on a branch.

My dancing antics seemed alien. I would stut my stuff, wiggle my hips and immediately a swarm of testosterone filled men would be hanging around. I asked my beau why and he replied if you dance in a sexy way it means you want to have sex. Ah!

Was it only French men who are ubersexual? Many a time I have heard French girlfriends say that they would prefer to see their man at the breakfast table and ignore what happened the night before.

Affairs in France are acceptable but invisible. Indeed when I first arrived in Paris and dined late at night due to my workload I noticed that after 11pm restaurants were full of elder men and pretty young things. It was mistress hour.

Then at one recent event I met a decent chap with his wife ballooning with pregnancy. Couple of weeks later I bumped into him at another function with a different woman - he jokingly introduced us as his mistress. We all laughed at what we took as a married man's idea of humour. However towards the end of the evening they were spotted French kissing.

So the burning question was who are all these women? Are they femme fatales? Or equally frustrated married women? The gay world however seems totally at ease and progressive with naked bars in the 4th, open relationships and endless hook up websites.

It is the old traditional model that is suffering. But there is hope. My beau and I are in love and into each other. In fact we are the couple who make everyone feel little nauseous as we kiss and caress in bar corners or cote a cote in restaurants.

We are now known as the "toutereaux" by friends and family. Sweet but is it all really so unusual?

The whole situation was brought to a head during a chat with a friend's mum. She had had a lover for years who was still married with grown up kids. Yet he could not at the age of 70 break up the family unit.

She gave me some beauty advice - to keep your man you need to wear heels every day, blow dry hair regularly, always have painted feet and toes and never EVER let your bikini line grow wild.

I realised - all the passion and sex was outward and aesthetic. The tiny Parisienne form, the chic attire and immaculate coiffure were all well and good - but where was the fire? Lets face it no one wants to ravage a doll...

Brit Chick says: "'For those in search of tantalising sensuality head to the CrazyHorse - sort of place James Bond would hang out and lore to point a James Bond girl'