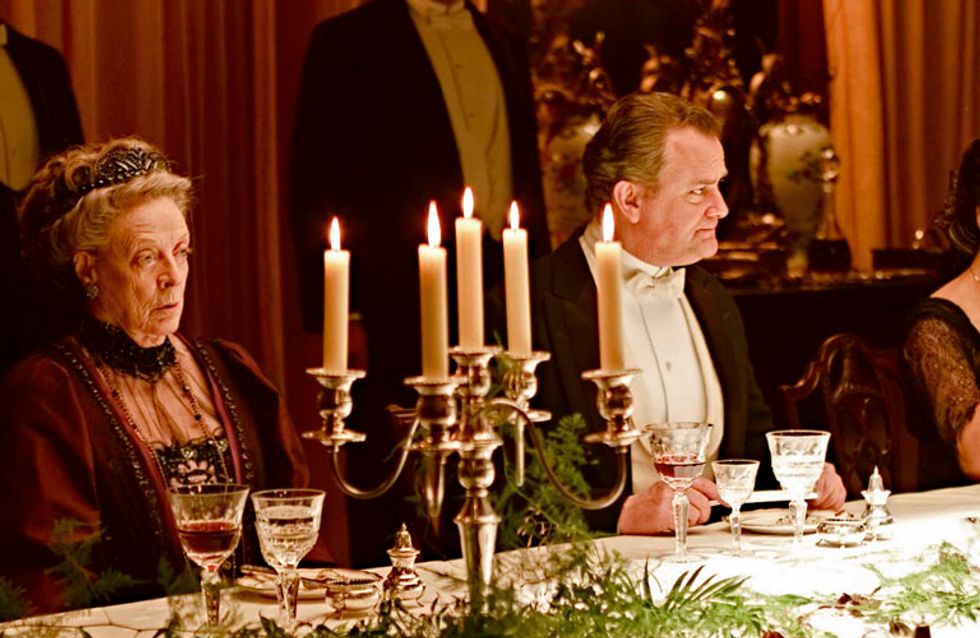 Imagine having afternoon tea in Downton Abbey? Gossiping with Lady Edith and Lady Mary, giving Tom Branson the eye from across the table, whilst attempting not to chuckle too loudly at the Dowager Countess of Grantham’s witty barbs. It’s pretty unlikely we’ll be able to live out our Downton fantasy any time soon, but we can have our own afternoon tea, Downton Abbey style. Check out our handy guide to holding an aristocratic afternoon tea – don’t worry, its Violet Crawley approved.

Unless you were raised as a member of the aristocratic Crawley family living in Downton Abbey, it can be difficult to navigate the tricky social minefield that comes with afternoon tea.

It’s not just sweet tea, scones and finger sandwiches – oh no – there are many rules and regulations that come with aristocratic etiquette. It's definitely a case of minding your manners. But where to start?

Luckily for us etiquette consultant William Hanson from The English Manner has instructed us on the correct way for guests to behave at social engagements in the 1920s.

So you needn’t fear embarrassing yourself in front of the Earl of Grantham or being subjected to Mr Carson’s barely hidden horror as you – gasp – use the wrong spoon at the dining table!

Here are the top ten sofeminine tips for a Downton Abbey afternoon tea....

You would remove the gloves to have tea though, placing them on your lap with your napkin over the top, whilst the hat stayed on as it would be pinned to your head. After six o’clock the hat comes off – you wouldn’t wear your hat to dinner, of course.

The milk is to be added in after the tea. In the times of Downton Abbey, the aristocracy drank from fine bone china, but downstairs the servants would drink from clay pottery mugs – which aren’t as sophisticated as the mugs we have today – and they couldn’t withstand high temperatures. So you would have to put a bit of milk in first to act as a coolant when you added the hot tea, so to prevent the mug from cracking. Supposedly you used to be able to tell someone’s breeding from whether you put the milk in before or after the tea was poured. Carson would in any case...

Once you’ve added in your milk, do not stir as it may result in splashing. Instead move the spoon back and forth – six to twelve o’clock’ – as that is much more elegant. Then you would place the teaspoon at the back of the teacup on the saucer.

When sitting with your tea, hold the saucer at waist height. Do not hook your finger through the handle, but rather pinch your thumb and forefinger together, and then use your middle finger to support and balance the cup underneath. Little fingers stay in – do not poke them out.

They are called finger sandwiches because they are often cut into little finger-sized pieces, but also because you use your fingers to eat them. Do not use cutlery with them, and you most certainly do not use a knife on any bread products – not even scones. Instead of cutting your scone across the middle, gently break it apart with your fingers.

From the moment you sit down, you place the napkin on your lap. It is used to protect your clothing, but also to dab your mouth gently from time to time. Do not use it like a flannel! That's terribly unbecoming. When leaving the table, place your napkin on your chair if you're coming back, or on the table if you're attempting to storm out dramatically, Lady Mary style.

In Downton Abbey times you would not have passed comment about the food – they did not make it themselves as they had a chef. Neither would you have commented on the décor. If you walked into a house such as Downton and started complimenting everything, you were essentially indicating that you weren’t used to this sort of splendour. You don’t compliment outfits either, as it was a given that everyone looked nice.

The ladies would have done something called ‘Turning the table’ to ensure that everyone had someone to chat to during the duration of the gathering. The seating arrangement would be boy-girl-boy-girl, and for the first course the women would have spoken to the guest on their left, then they would turn to talk to the guest on their right for the second course. You would not have spoken across the table, as the tables were fairly wide and you have had to shout to be heard, which obviously isn’t very proper.

Talking about money is off limits, and similarly you would not ask someone what they did for a living. Opt for light conversation topics as you are all there in a social capacity, not a professional or business capacity. If someone is happy to talk about their job then they will tell you, but don’t be presumptuous and ask. Sex, health, politics and religion are also areas which are best to be avoided.

Downton Abbey Series 4 is out NOW on DVD and Blu-ray and the Downton Abbey Christmas special will air on ITV1 on 25th December.

How many Downton Abbey afternoon tea rules did you know about? Tweet us @SofeminineUK!

104 shares
#Downton Abbey
From hair ideas to outifts, look no further for your daily inspiration