Why You're Never Too Old to Go to Ibiza

by Adrián Martín Published on 6 June 2011 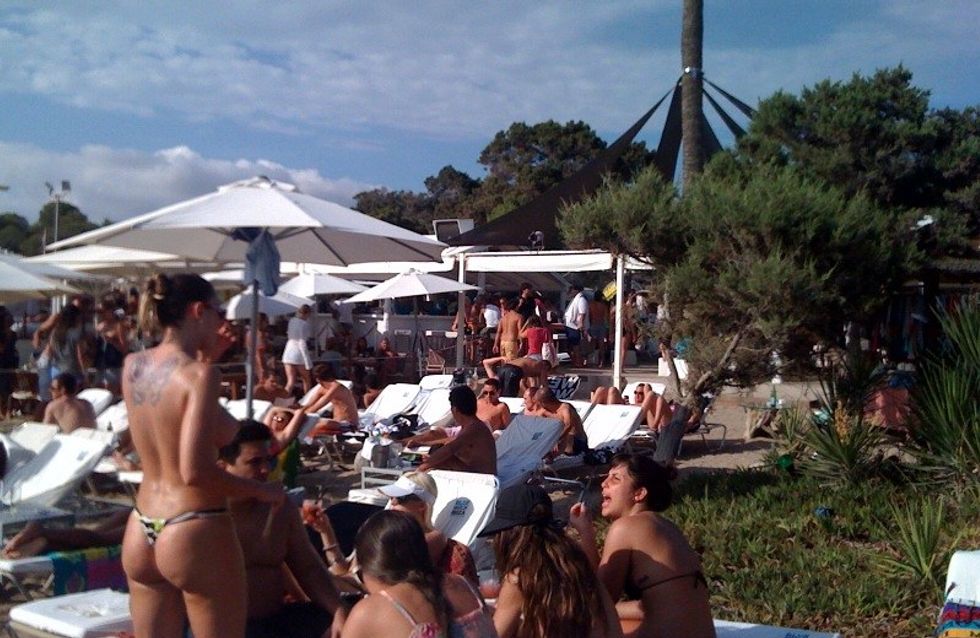 Climbing the steps of the disco MTV plane I was immediately reminded of my crazy exploits on the island of hedonism 10 years ago.

Why you're never too old to go to Ibiza...

Partying all night, burgers at dawn, and crashing on a beach filled with so many loungers you could not see the sand.

Goddamit. I still had it in me. I didn't waste 100s of Euros on face rejuvenation cream for nothing; not to mention the bootcamp gym regime every morning.

On a good day l could pass for early 30s so today I was praying for late 20s if you looked at me from afar in a smoky club - ok and maybe squinted.

We only booked the last minute trip to hear the dance track of the summer - the one that my beau's teen son introduced to us. Since then we had listened to it 100s of time in the Volvo with kids rolling their eyes at us.

Nothing worse than uncool parents trying to be cool. We wanted the lock stock VIP Pacha experience so booked the motel, a table at the club and bought as much cherry branded paraphernalia we could think of. I even contemplated a tattoo but was not sure it would go so well with my backless haute couture dresses.

In the end I settled for a ruby red outfit instead. We were greeted at the airport by the vibrant hoardings which led us along the highway - I was beside myself, you could smell the dry ice and stale sweat already.

We were going to party like rock stars in the el Motel suite. Feeling young(ish), free (for one night only) and fabulous we kicked off with a frolic in the outdoor jacuzzi, writhing naked bodies and bubbles in our minds - the reality was more Hugh Heffner than the bunny girls, needless to say.

We started our night out in the port - soaking up the vibes and kebab smells. There were far too many burnt lobsters, eating pizza with their mouth open and slurping prosecco - but nothing would deter my enthusiasm.

We sat at a bar of an ex amant and I tried to relive that frisson of old - the sexy Pacha parades, the flamboyance of la Troya lady boys, the bad watery cocktails - but as I looked upon my old flame who looked decidedly jaded after years of partying and drug taking - I realised my tastes were no longer the same. It was time to hit the vip stratosphere.

We headed off to cherry mecca. I looked over my shoulder at the endless queue of clubbers as I tottered up to the doorman assuming we would be elegantly ushered to a glamorous table overlooking the rocking dance floor. Not quite. Those were the days.

The bouncer literally bounced me back into the crowd. We had to battle through 20 year old German rich Wunder kids and wheeler dealer Essex boys. There was absolutely nothing VIP about this experience.

We were then finally given a table - but to my dismay as far from the dance floor as you can get. Zero atmosphere - possibly even less than a bad school disco - the three of us in a big empty space whilst youngsters heading for the heaving dance floor looked on at the oldies, on the fringe of the REAL fun.

There was also a canoodling middle aged couple on a couch (ok, more middle aged than us) that did nothing to raise the vibration. None of us were going to accept it.

I was determined to find a podium and strut my stuff. Not so easy. Hoards of sweaty clubbers swallowed me whole into the throng. My five foot stature meant I was pinned against a greasy tattooed shoulder or my nose squashed in an overexposed pink bosom.

It was all rather a dampener and I brooded in the very unimportant area. The only thing coming up for me was my bad mood.

By 5am the teen crowds occupying all my precious dance space had left - no stamina amongst the youth today - and then I hit jackpot, a podium - I tried to climb onto a table, then a speaker but the fascist bouncers singled me out with their green lasers of shame.

By this time I realised my Jimmy Choos had actually become welded to my foot and I actually couldn't walk.

The moment I stopped dancing the pain went into overdrive. My darling man massaged my foot with ice as the high as kite clubbers ventured out into the morning air.

One looked on at me with a mixture of pity and scorn - as if to say don't play with big boys unless you're up to it...but we weren't going to give in to our pain and tiredness.

We danced to the bitter end, left with the E crowd and hit our beds at 8am. We were wrecked the next day to a point of catatonia and then developed hideous Ibiza flu few days after - but our pride was intact.

Next year I may have to up the ante - I wonder...which top DJ could I befriend...?