Most babies spend their time crawling around in babygrows and soft cotton or, failing that, air walking on their backs nappy-less. But when you're a Kardashian life's pretty different. Baby North West has been kitted out with all the best designer garb to make her first Paris Fashion Week one to remember. That beats bips and body suits any day.

Any child of Kimye's was never going to go without but inheriting a designer wardrobe when you're two months old is enough to make Harper Beckham stomp her feet.

Baby North has been treated to a bevy of French labels from Celine to Alexander Wang to welcome the little tot into the world of Paris Fashion Week.

Little Nori has pretty much sealed her seat on the FROW for seasons to come and she's definitely not going to be short of designer swag anytime soon.

So here's what her first public appearance and fashion week wardrobe could look like:

A mini Céline jumper (personally addressed to 'buba') with snakeskin effect trainers - a Kanye-approved outfit for sure.

An Alexander Wang leather mini dress. We're sure Kim had a say in that one!

And that rounds off the designer wardrobe that we're pining for in grown-up sizes. 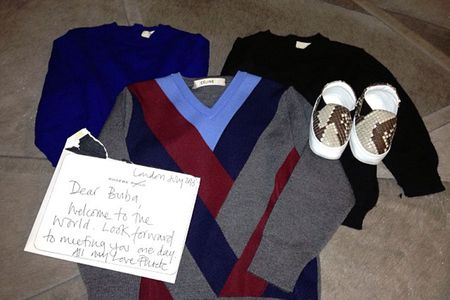 What do you think of Nori's designer garb? Cute or designer couture gone too far? Tweet us @sofeminineuk