Former Disney starlet Selena Gomez isn't usually one for grungy garments and moody model shots in the back streets of London but that didn't stop her from swapping sequins for East London swagger for her i-D Magazine editorial. Think stripped back snaps, edgy alleyways and kooky coats - there's a new London It girl on the scene.

Selena Gomez is barely recognisable from her sweet Disney self in her edgy editorial with i-D Magazine.

The This Is England inspired photo shoot was shot by Scott Trindle and sees Selena posing alongside buzz cuts and a gritty East London backdrop.

Without a hint of sparkle, gold or glitter the Hollywood songstress shows off a whole new look as she swaps glamour for grunge and Los Angeles princess for London grunge.

Gomez quickly settles into her Hollywood to Hackney makeover with rained-on tresses, barely there makeup and an Alexa Chung-approved outfit.

Wearing an oversized boyfriend coat by John Varvatos, a slouchy Margaret Howell sweater and low rise jeans, Selena is all kinds of London laid bare. If this is the result of an urban-over, we want one fast.

Hands in pockets, city chic stance in check. Someone put her on the underground already - she's a London pro. 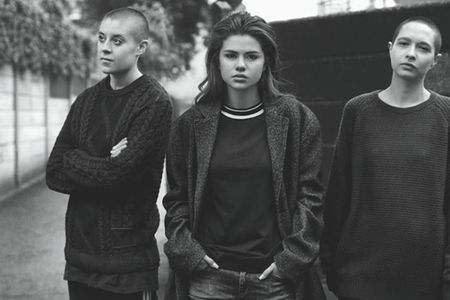 Styled-up by Elgar Johnson she'd certainly fit in with the Primrose Hill crowd, the frowers or the pose-pulling wifeys Cara Delevingne and Rita Ora.

So what does she make of her glam under?

"I was being rained on, it was freezing, I was covered in a giant sweater and my hair was all over the place. I got to just be in that moment and feel like I was there."

What do ya know. Selena Gomez knows what it feels like to be a bedraggled Londoner.

She adds: "I love doing shoots overseas. Actually being there and feeling the environment adds a realness to the shoot.

"It’s so easy to wear incredible, beautiful dresses and look super glamorous, because you have the power of Photoshop, but a shoot that’s really stripped-down and raw is really fun to do."

Yeah, sure it's all too easy to be glamorous and gorgeous... when you're Selena Gomez!

Does Selena Gomez make for a convincing London It girl? Tweet us @sofeminineuk

Follow us on Pinterest!
You might also like
Donatella Versace: the designer, with friends, who revolutionised the fashion world
by Ayla Soguksu
The brands that celebrate diversity and break the codes of beauty
by Amy Denman
Victoria Beckham's best looks: copy the style of the 'Posh Spice'
by Ayla Soguksu
Lady Diana VS Kate Middleton: the looks in comparison
by Ayla Soguksu
The most daring dresses worn at the Golden Globe Awards
by Charlotte Hoddge
When Runway Models Fall On The Catwalk!
by the editorial team
The massive rose gold trend
by Charlotte Hoddge
Meghan Markles best fashion moments throughout the years
by Charlotte Hoddge
The Emmy Awards 2017: Our Round Up Of The Best Outfits
by Lareese Craig
Jennifer Lawrence Style: Her Best Outfits To Date
by Lareese Craig