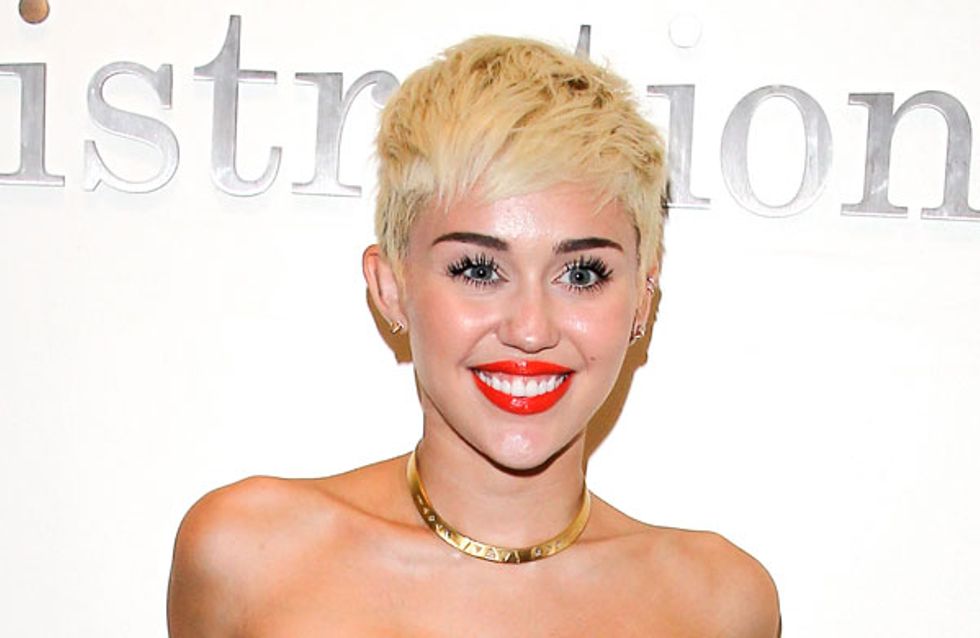 It will take more than a naked photo shoot to put Miss Miley Cyrus off - after all she's hardly shy when it comes to bust-baring basques and cheeky hot pants. She's just stripped off for Marc Jacobs' Protect The Skin You're In charity t-shirts - and let's just say it must have been one airy shoot...

Miley Cyrus is anything but shy, which is why she was the perfect choice for Marc Jacobs' naked charity campaign.

That's right, Miss Cyrus has made another fashion statement - and this time it doesn't involve a single item of Chanel. Shock.

Showing off her slim pins for the charity shoot, the 20-year-old We Can't Stop singer poses in the nude, covering her modesty with her hands.

The risqué image has been printed onto a plain white tee, which will be sold to raise money for the New York University Skin Cancer Institute.

Miley follows in the footsteps of a whole host of A-listers who have bared all for the campaign, including Miranda Kerr, Victoria Beckham, Cara Delevingne, Naomi Campbell and Dita Von Teese.

This isn't the first time Miley's shown support for Marc - earlier this year she wore his punked-up fishnet dress to the Met Ball. Fashion friendship alert.

Gushing about Mr Jacobs and his fashion designing skills, she said: "Him and I have stayed really close. They're on this perfect line of staying high fashion but also staying where I feel like people look at my clothes and they're inspired by it. ​

In a recent interview, she also named Marc as her favourite designer and the Olsen Twins as her ultimate fashion crush.

Though currently only available over in the States - priced at $35 (£23) - the Miley tees are set to hit Europe next month.

Will you be racing to pull this Miley tee over your head? Tweet us @sofeminineuk

Sign up to get involved!
You might also like
Donatella Versace: the designer, with friends, who revolutionised the fashion world
by the editorial team
The brands that celebrate diversity and break the codes of beauty
by Amy Denman
Victoria Beckham's best looks: copy the style of the 'Posh Spice'
by the editorial team
Lady Diana VS Kate Middleton: the looks in comparison
by the editorial team
The most daring dresses worn at the Golden Globe Awards
by Charlotte Hoddge
The Emmy Awards 2017: Our Round Up Of The Best Outfits
by Lareese Craig
Jennifer Lawrence Style: Her Best Outfits To Date
by Lareese Craig
Winnie Harlow: Model, Activist & All Round Babe
by Lareese Craig
No Knickers, No Problem: Celebrities Not Wearing Underwear
by Helen Turnbull
Free The Nipple! The Celebrities Who Love To Go Braless
by Rose Adams