In the aftermath of her OTT twerking and foam finger farce at the MTV Video Music Awards, Miley Cyrus was reportedly axed from her American Vogue cover. Obviously the raunchy nude hot pants weren't to Anna Wintour's taste but perhaps Selena Gomez will deliver. She's said to be in front cover talks with the bob-haired editor. This is cut-throat fashion at its best.

Even if you didn't watch Miley Cyrus' controversial VMAs performance you would have heard about it, read about and possibly even tried a bit of twerking yourself.

One woman who was far from impressed with her raunchy routine was America Vogue editor Anna Wintour, who allegedly deemed her "distasteful".

The legendary editor was supposedly so disappointed with the We Can't Stop singer that she axed her from her Vogue cover shoot.

The December issue had already been shot when Anna nixed the former Disney star for her inappropriate behaviour.

Although nothing has been confirmed from camp Vogue, Anna's said to have set her sights on another Disney star - one who's tongue rarely makes an appearance.

Selena Gomez was spotted having a private chat with Wintour on the frow at Milan Fashion Week. A coincidence or the perfect setting to seal the front cover deal?

If the rumours are true and Selena snaps up the opportunity (who wouldn't?!) then there's going to be a whole lot of BFF making up to do.

Selena stood up for Miley and her outrageous VMAs performance, saying: "I really thought the collaboration with Miley was amazing… Loved it."

Check out Miley's controversial wardrobe in the gallery below 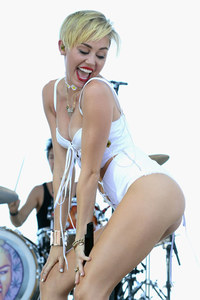 Miley vs Selena, who would you like to see on the cover of US Vogue? Tweet us your thoughts @sofeminineuk

Sign up to get involved!
You might also like
Donatella Versace: the designer, with friends, who revolutionised the fashion world
by Ayla Soguksu
The brands that celebrate diversity and break the codes of beauty
by Amy Denman
Kylie Jenner's fashion highlights
by Amy Denman
Victoria Beckham's best looks: copy the style of the 'Posh Spice'
by Ayla Soguksu
Models who break the standards of beauty
by Charlotte Hoddge
Iconic Oscar dresses from the year you were born
by Charlotte Hoddge
The most daring dresses worn at the Golden Globe Awards
by Charlotte Hoddge
Meghan Markles best fashion moments throughout the years
by Charlotte Hoddge
The Emmy Awards 2017: Our Round Up Of The Best Outfits
by Lareese Craig
Jennifer Lawrence Style: Her Best Outfits To Date
by Lareese Craig