by Pascale Day Published on 2 November 2016 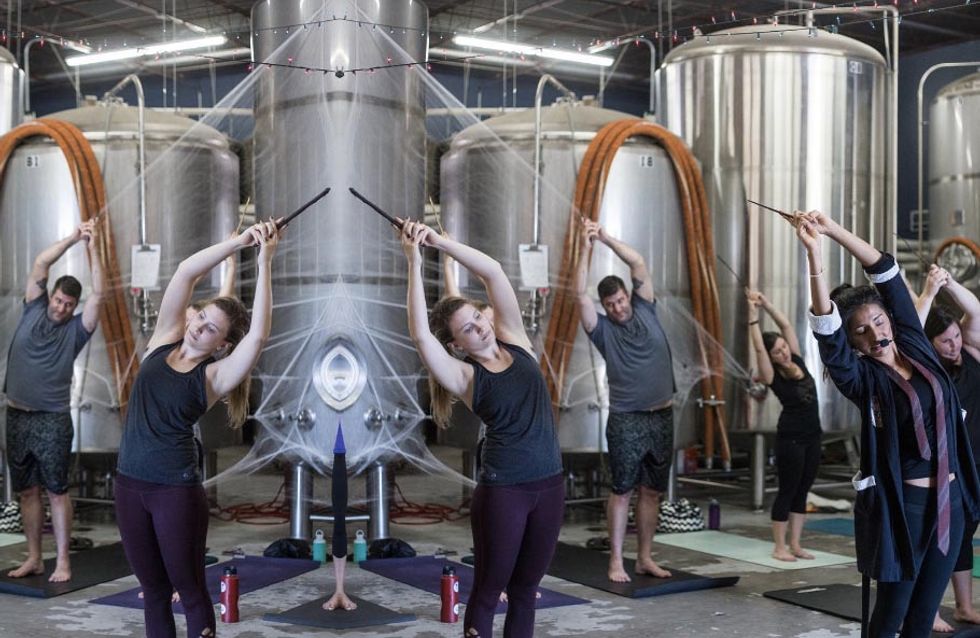 The world, by this point, is more than accustomed to every type of yoga class imaginable - if the hot and laughing varieties weren't enough, a class in Texas has taken it to the next level: Harry Potter yoga. Yup, you read right - a yoga class with wands and spells. Jealous? Wait until you see the pictures....

Hogwarts would have been a different place if those kids, and teachers alike, had a way to blow off steam. We like to think that perhaps if Harry and co had been able to trot on down to a yoga sesh on the grassy mounds outside Hagrid's house on a Saturday morning, then maybe their school wouldn't have been such a tense place to be. If there had been a spot of vinyasa in the evenings, as the sun set behind the school's turrets, they could have practised some necessary breathing techniques, and then the films could have ended with forgiveness and a green juice rather than in complete carnage with death eaters.

So happy to be a part of this amazing crew @circlebrew ! #harrypotteryoga #beeryoga #atxyoga #yogaeverydamnday #yoga

But better late than never! Because this yoga group in Austin, Texas, has changed up its usual stretching routine in a favour of a class that we're sure Miss Rowling would approve of: Harry Potter yoga. Yep, participants at Circle Brewing Co - ya heard right: this is a yoga class in a brewery, called Pints and Poses, where $10 gets you an hour of yoga and a pint - were given wands to incorporate into their stretches. And if you're not jealous enough, there was also a sorting hat and a Prisoner of Azkaban photo frame to fulfil all of your wizarding Instagram needs.

Harry Potter Yoga was a success! Visit @cosmopolitan to see all the pics from the event at @circlebrew ✨[link in bio] pics by @alexagwagner

The session was taught by yoga instructor and wizard extraordinaire Isabel Beltran, who says on her the class was to "Celebrate the life of Lily and James Potter, on the eve of their passing, through a series of magical asanas turned yoga poses". And for those lucky few in the vicinity of Isabel's classes, she's doing another themed session to celebrate the release of Fantastic Beasts and Where To Find Them in November. All we can say is we can't wait for the UK to get onto this trend - we have our wands at the ready!

Harry Potter yoga success! The sol-out class enjoyed pumpkin juice, a mandrake garden, wands for all the auror yogis and more. Follow @isabelb12om and @circlebrew for the next themed class. Until then, mischief managed 🤗#yoga#yogaeverywhere#yogainspiration#yogaeverydamnday#yogaeveryday#yogagirl#yogalife#yogalove

Would you take part in a Harry Potter-themed yoga sesh? Let us know! @sofeminineUK

QUIZ: Which Harry Potter Villain Are You?

Follow us on Pinterest!
You might also like
Motivational Before & After Weight Loss Pictures
by the editorial team
Yoga
by the editorial team
Beer Yoga Is The Latest Fitness Fad You Need To Try
by Pascale Day
Nauli Is The Freakiest Yoga Trick You'll Never Be Able To Master
by Helen Turnbull
Sweat Your Way To Good Health! 7 Hot Yoga Benefits You Need To Know
by Vivian KELLY
34 Yoga Quotes To Inspire That Downward Dog
by Rose Adams
The 10 Weird And Wonderful Yoga Classes You Have To See To Believe
by Maria Bell
21 Reasons Why Yoga Is The Best Workout Of Them All
by Maria Bell
The Class Everyone's Talking About: Everything You Need To Know About 1Rebel
by Pascale Day
Why Barrecore Is The Best Fitness Class Your Butt Will Ever Do
by Lareese Craig