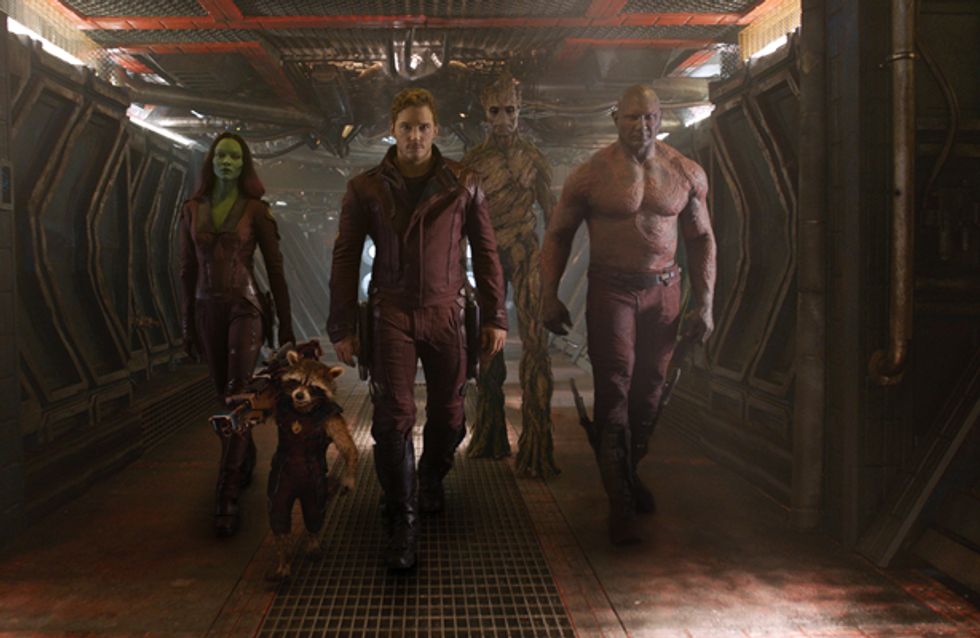 We chatted to the Guardians of the Galaxy cast Chris Pratt (Peter Quill/Star-Lord), Zoe Saldana (Gamora), Vin Diesel (Groot), Dave Bautista (Drax) and Karen Gillan (Nebula) about their upcoming sci-fi blockbuster. So what was Karen Gillan's inspiration for Nebula? Why do Vin Diesel's children think their relatives are trees? Here's 15 things we learned while chatting to the gang...

Zoe Saldana wanted her character Gamora to have big boobs

When asked about them she replied: “DON’T ask me what happened to them! I’ll just be like, ‘oh man, I thought they were there!’

Zoe and Chris Pratt would make up dance routines

According to Dave Bautista, the pair were hilarious to watch. He said: “My funnest moments on set was just watching her and Chris interact with each other because…they would get into some sort of song and dance routine.”

WE NEED TO SEE THIS!

Speaking of the audition process, Dave said: “It went on for months and they wouldn’t exclude me from the part…I had a battle within myself and read the Internet rumours like ‘this guys got the part! No, this guy’s got the part!’ It was like three and a half months of torture.”

According to Karen, her screen test for Nebula was totally “off the mark.” She said: “It was just so the opposite of what I should have done, which was really funny. I played her more Scottish which is just so not Nebula!”

It would have been hilarious though.

He said: “Bert Macklin? Bert Macklin doesn’t watch movies. He watches surveillance footage, that’s it...Andy Dwyer would lose his mind. He would see it in 3D, as long as he could afford. Which he probably couldn't.”

Don’t know who Bert Macklin is? Check this out…

Karen Gillan immediately fell asleep after having her head shaved

She said: “I must have been subconsciously really freaking out under my cool exterior. I fell asleep then and there for two hours and no one woke me up which is weird because I didn’t know anyone on set at that point so I was just the weird, bald, sleeping girl.”

He said: “It takes me too long to post…there should never be a wrong post, but there’s a responsibility you don’t anticipate…sometimes it takes me six hours to do one post.”

We'll do it for you Vin! What's your password again?

Chris Pratt was bolted into his mask

In the movie, Pratt’s character Peter Quill wears an oxygen mask, though apparently in reality it wasn't so useful. Chris said: After the first day they realised that they couldn’t just snap the thing on my head, they had to bolt it together…every time they took it apart I was gasping for breath…oh, sneezing was not good.”

You’d think as a movie star you could afford your own lunch but nahhh. Apparently Zoe would hang around to wait until Dave had finished because “he always ate super healthy.”

We’re guessing he ate five dozen eggs to help him get large?

Apparently Zoe was stuck on what to get Dave as a parting gift after the end of filming, probably since Dave is basically a giant, silent teddy bear. In the end she finally settled on getting him a book of bums.

She said: “I said [to my husband] well, he likes butts”, and my husband was like: “perfect!” and found this big butt book and Dave was like, “OH THANK YOU.”

That’s right. Karen’s psychotic bald warrior alien was based on Marilyn Monroe! Well, her voice anyway! Karen said director James Gunn suggested she try it out: “He was like, do you want to just try it as Marilyn Monroe? …When he gave me that we sort of saw the character…that’s where this breathy American accent came from.”

Vin Diesel knows how to make an entrance

Vin Diesel, possibly the coolest person in the world, burst into the interview playing Sam Smith’s Stay With Me and swaying slowly to the table. Legend.

At the Comic Con last year, Karen threw her ginger wig into the crowd, which weirdly turned out to be a mistake. She said: “In the moment I was like ‘woohoo!’ and threw it into the audience then there were these two girls like fighting for it on the floor!”

Instead of spooking herself out in her terrifying blue get up, Karen said: “all we did in our downtime was just take pictures of me holding ridiculous objects! They kind of spoiled the illusion.”

Since he plays a humanoid tree named Groot, after taking his kids to see the film he said: “We were driving down along this tree-lined road, and my son is looking out of the window at the trees, and he says, ‘Daddy, daddy, it’s your brothers and sisters!’”

Who, in a million years, could have imagined that you could play a role that would allow your children to look at very trees as relatives. How profound. How tomorrow. How deep.”

HOW CUTE. Although, he'd better be careful lighting log fires in front of them now...

Will you be watching The Guardians of the Galaxy, which will be released in UK cinemas on 31st July? Tweet us @sofeminineUK