by Pascale Day Published on 9 March 2016 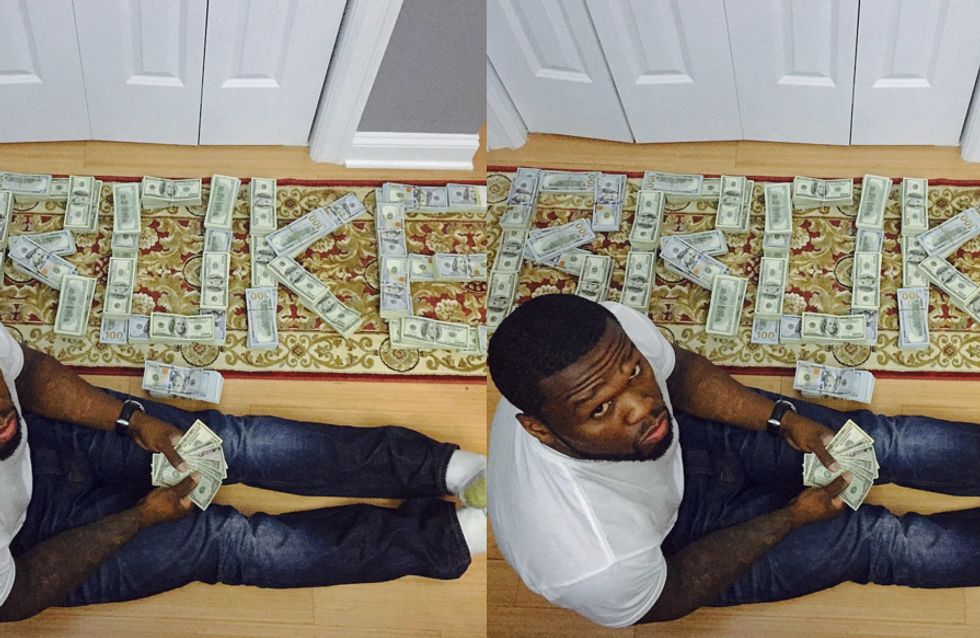 Rapper 50 Cent has been summoned back to court after filing for bankruptcy last year on account of the fact that his Instagram page is choc-full of snaps with him and a whole bunch of cash. But it might just be Fiddy's excuse that is the highlight of this whole financial debacle.

50 Cent took his name from a 1980s petty criminal who also went by the same name, and was shot dead in '87. 50 Cent came this criminal's willingness to rob people regardless of how much money they had on them. Y2K Fiddy said he chose the moniker as his rap name because "I'm the same kind of person 50 cent was - I provide for myself by any means." And, because Curtis Jackson doesn't quite have the same gangster ring to it.

But it turns out now, that statement rings true more now than ever. 50 Cent is no longer making awful songs to provide for himself, but lying to a court justice about his financial affairs. In 2015, Fiddy filed for bankruptcy, making his rap name perfect internet fodder for hundreds of memes and pithy one-liners on Twitter. How ironic it was that 50 Cent was no longer just a moniker, but also an indication of how much the guy had left in his bank account, right?

Look The hungry puppy's a Big DOG now. I'm the best from my hood ever. The only thing that can stop me is me #EFFENVODKA #FRIGO #SMSAUDIO

​Wrong. Because, coincidentally, the bankruptcy came just days after Fiddy lost a lawsuit for posting a sex tape on his website of a woman without her permission. HE had bought the tape of sworn enemy Rick Ross's ex from her ex boyfriend, and posted the video online with his face superimposed into it, without her consent. Just a gentle reminder: 50 Cent is a 40 year old man.

The court ordered that he pay the woman in the video, Lastonia Leviston, $5m in damages and disclose his financial details to the jury in order to find a definitive amount for punitive charges. However, instead of doing this, Fiddy simply filed for bankruptcy, like the stand-up guy he is, therefore making it extremely hard for Ms Leviston to get her money.

Soon after, Jackson posted a photo on his Instagram of him stood next to a Smart Car with the caption 'Times are hard out here LMAO'. His actual car collection includes a Rolls Royce, a Ferrari and a Lamborghini. Hard times indeed.

However, it turns out Fiddy is no smart cookie when it comes to "reorganising his finances", because whilst he's been telling the court he has no money, his Instagram has been showing a different story entirely. There are multiple pictures on ol' Curtis's Insta page that show him posing with huge wads of cash. The picture below literally has the caption: "I'm too rich".

Yeah, people are starting to wonder how broke 50 Cent really is when he's spelling it out to you... in money....

Man this lunch money,I gotta go to work I'm still up, no Sleep at all. NEW MUSIC this week,Off The KANAN tape. #EFFENVODKA #FRIGO #SMSAUDIO

Ok I found my legs, but I can't find nothing to watch on TV. Power season 3 on the way. #EFFENVODKA #FRIGO #SMSAUDIO

Last month, US bankruptcy judge Ann Nevins expressed her concerns about the social media posting and is keen for Mr Cent to explain himself. His attorneys insist that he has been "transparent with all creditors", but he was summoned on Wednesday to appear back in court.

Now, here's the best bit: Fiddy insists that all the money in the Insta pics is FAKE. See, that cash isn't real, and it's only purpose is to keep up appearances. He's a rapper dontcha know. He's got a reputation to uphold.

So it turns out Curtis might have to hand that money over sooner than he thought. One question though Fiddy: where can we get our hands on that much fake money?

What do you think of 50 Cent's 'fake money' story? Let us know! @sofeminineUK