It’s been nine years since Rebecca Loos claimed she had an affair with David Beckham.

Achieving instant notoriety, the former PA risked breaking up David's marriage to Victoria Beckham after alleging she had a fling with the superstar footballer in 2004.

But the 37-year-old father-of-four has always denied Rebecca's claims that she had a four-month fling with him after he moved to Spain to play for Real Madrid.

Years on, the allegations have been all but forgotten - the Beckhams are still together and went on to have daughter Harper in 2011 and Rebecca lives a quiet life in Norway with her husband and two children.

But after being on the receiving end of years of negative attention, the 35-year-old has returned to the spotlight to talk about the infamous alleged affair on Daybreak. 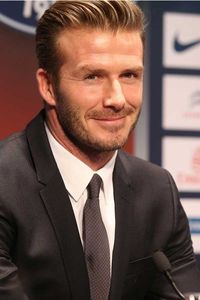 Rebecca told Daybreak hosts Kate Garraway and Aled Jones that if she had the chance again she wouldn’t have sold her story in the way she did.

She admitted: “Obviously I'm a mother now and I'm married myself and being in the media for six or seven years, so knowing what I know now, I would have definitely gone about things quite differently.”

“I think I just maybe could have gone about it in a kinder way. I don’t regret speaking out but I regret the way I went about it.”

She continued: “I think I was quite young and foolish and very reckless, and obviously I didn’t think things through, I just acted on impulse. And I like to think I'm a lot less like that now, hopefully.”

Surprisingly, Rebecca admitted that if she was in Victoria’s shoes, she wouldn’t be quite so able to forgive and forget.

In a move that’s set to anger Victoria even further, the adulteress revealed: “It's a topic that often comes up when I'm out with my girlfriends.

“An accidental drunk one night stand is maybe easier to forgive than constant lying and sneaking behind the back. I would never be able to forgive that.”

Following the bombshell revelation about her affair with Beckham, Rebecca went on to have a brief career in glamour modelling, posing nude for Dutch Playboy and taking part in reality TV show Celebrity Love Island.

She’s estimated to have made £1million out of her fifteen minutes of fame.

David and Victoria Beckham's wedding anniversary: Their love in pictures