Keen to shake off his wholesome High School Musical image, Zac Efron will soon be seen starring in shocking new film The Paperboy alongside Nicole Kidman.

The sexually and racially charged movie also stars Matthew McConaughey and John Cusack and is set in the backwaters of steamy 1960s South Florida.

Nicole plays a sultry death-row groupie who seduces most of the men in the film, including Zac’s character Jack Jansen.

Although the 24-year-old heartthrob admits that when he took the role he was looking for a project with depth and risk, he wasn’t quite prepared for the 45-year-old mother-of-two’s fearless performance.

Speaking to Black Book magazine, the 17 Again actor revealed: “I've never been so scared in my life, but that moment affirmed this movie was everything I set out to do.” 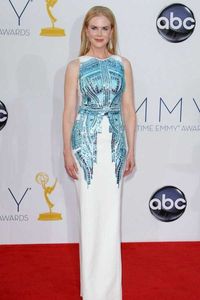 Zac enjoyed his steamy and intimate on-camera scenes with The Hours actress, but there was one particularly racy incident involving Nicole and John Cusack at the start of filming that left the young actor stunned.

He had to stand by and watch as vampish Nicole seduced John’s character, which led him to perform a sex act in his underwear.

The High School Musical star recounts: “[On the first day of filming] Nicole just completely went for it. She was telling everyone ‘I'm bringing my A-game. What do you have?’”

After the explicit scene, Zac had a new respect for the Oscar-winning actress, which clearly had nothing to do with the wild sex appeal of her character.

The actor, who is 21 years her junior, said: "The love scenes with Nicole Kidman were the highlight of my life. Every scene felt like I was in Moulin Rouge."

When he took on the role Zac said that he knew it would destroy his innocent image once and for all, although he wasn’t quite so prepared to spend the duration of filming in nothing more than his underpants.