by Cliche Wynter Published on 6 March 2015 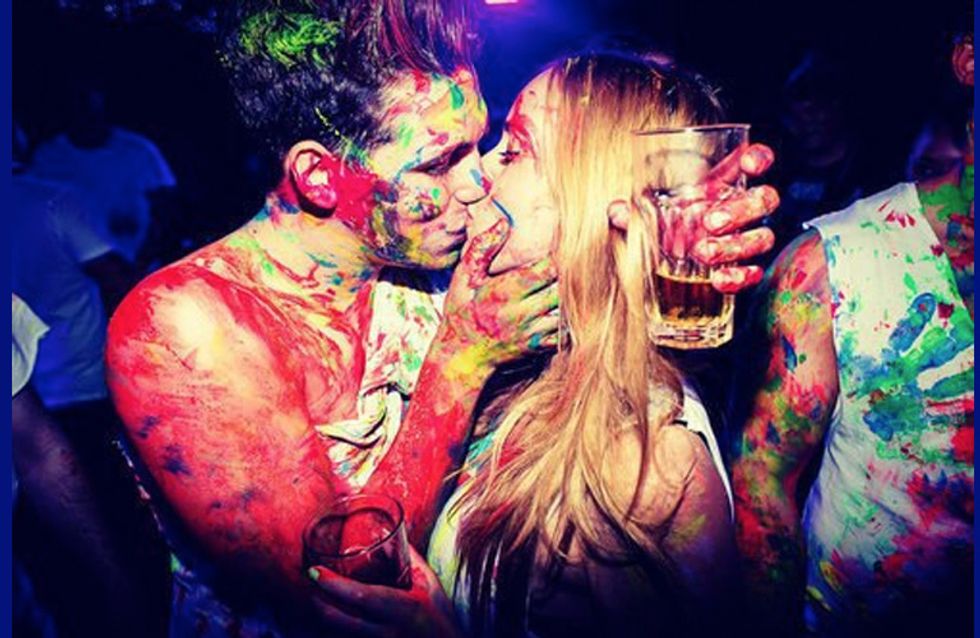 Have you reached that desperate point in life where you're so frustrated with love, you're now willing to hit happy hour to find your soulmate? Let me stop you in your tracks. No matter how much you try convincing yourself otherwise, there's just no way you're going to meet "the one" in a bar. So as tempting as slurred chats over shots sound, you have to resist. Here's why...

1. He's probably trying to bag a ton of chicks

True story, I went to a party a few months ago with a few friends, and not to my surprise, the boys were out in fine form. Their eyes scanned the room over and over again, ready to pounce on anything with a pulse, glossed lips, and pretty smile.

I kid you not, I witnessed a dude receive one girl's number, and once she left, started to hit on another hottie. And I mean sure, he could just be testing out his options. But planting a thousand seeds means the odds of your connection with him growing just got slimmer.

2. He probably just wants to get you in the sack

Let's say you're the only chick he has been grinding on all night and throwing back shots of tequila with. You might think you've found something really special, but in reality, he was just keeping you close because he he wanted to take you home at the end of the night.

It's not to say that you didn't want the same thing, but one night stands don't typically translate into a fairytale ending.

I'm going to go out on a limb here and say that a sh*t ton of bad decisions are made when inebriated. Sound familiar? Yeah... When liquor becomes a part of the equation, there's no telling what will be said and done.

4. You'll probably dismiss him as being a creep

I think as women we're already programmed to assume that a dude approaching us in the bar is worthless. Which, to be honest, is hypocritical because there we all are standing in the same bar.

5. He might find you hot, but won't take you seriously

Oh, you better believe that hypocrisy goes both ways. He might be totally attracted to you in your short skirt and neck-breaking heels, but guys sometimes have this thing where they like to dismiss sexy women as being jezebels.

Sucks, but it happens.

6. You'll be too busy with your girls

Obviously. You rarely get to hang out with them, so when you do, you're ready to have a great time. Who cares about a sh*tty love life when your gals are there to give you all the affection and shots of tequila you will ever need?

7. Body language can easily be confused

Shocker: when you're intoxicated you're not 100% aware of your body language and how it can be perceived. That goes for both men and women. Since it's so easy for signals to get crossed, a lot of times there will be miscommunication, and thus, missed connections.

When you're hitting the scene with hair big enough to shelter all the stray cats in the world and 5 lbs. of mascara splattered across your face, it's safe to say you're not at your best.

Let's get it together, girl.

9. You're too busy dancing to care

"Blank Space" will come on and you legit morph into a superhuman version of yourself as you belt out Tay Tay's hit tune.

Hot guy? Who gives a damn about a hot guy when you're in your zone?

10. Will you even be attracted to him in the morning?

What are your thoughts on bar hopping in search of love? Tweet us @sofeminineUK

12 Types Of Guys We Meet On A Night Out