20 Reasons Dating A Surfer Is Like Winning The Boyfriend Lottery

by Lareese Craig Published on 28 October 2014 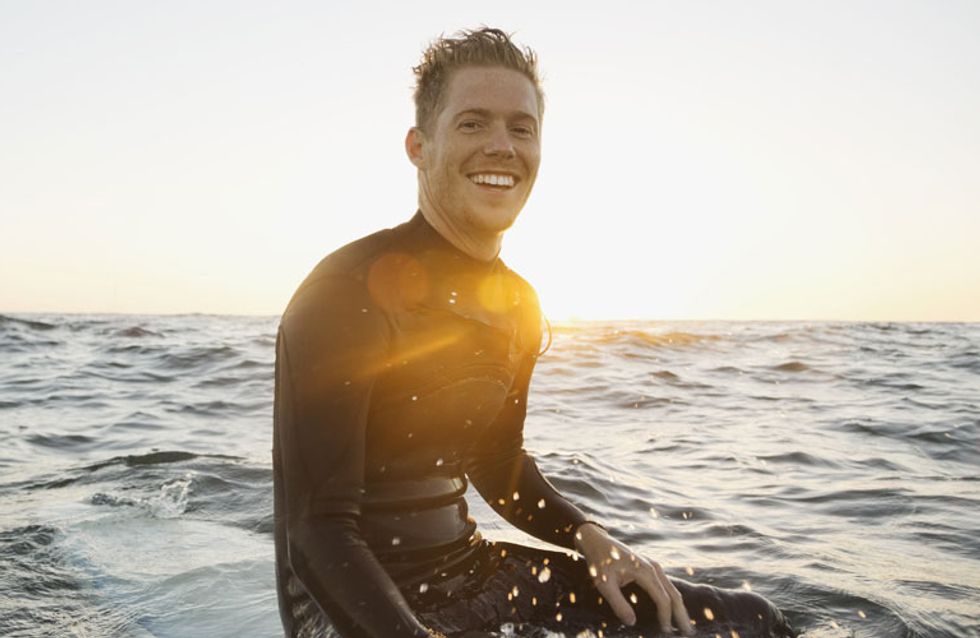 High five if you're dating a surfer. You get to sunbathe without being moaned at, have salty kisses on tap and beach holidays become a regular thang. If you don't have a wave chasing hottie in the vicinity then we suggest you up sticks to Bondi. Seriously. Here's 20 reasons why dating a surfer is like winning the god damn boyfriend lottery. As if you needed persuading anyway!

1. He won’t moan at you for taking beach selfies

The guy will happily stand there shirtless and pose with you. In fact he loves the camera as much as you do - and won't object to you taking hundreds of snaps of him surfing.

2. You can spend forever at the beach

All the sand in the world couldn’t bother him. Happy sunbathing!

Chasing mavericks sure does its thing for his physique. Aloha abs.

He’ll never be the one pestering you for a lay in. Yeah, he’s chilled out, but when it comes to making the most out of the day he’s on dawn patrol for sure.

5. Did we mention those ARMS

Paddling out again and again does magical things to his biceps and we’re not complaining. Now lift us up like a mermaid.

All that bobbing about waiting for a wave, jumping on it and then watching it fizzle out to nothing? It takes a real man to deal with that disappointment and come out on top.

It’s not a stereotype, it’s proven fact. Surfers have the best hair and when they emerge from the ocean and flick it around like some kind of Greek god, wow oh wow, you better hope your sunglasses cover the perving.

We'll never get bored of those.

9. The way he talks about the sea…also HOT

He lives, breathes and dreams about the surf but you won't mind because when he gets talking about the swell and the rips, not to mention sex wax (don’t ask), you can’t help but fall head over heels for his lingo. He knows his stuff and it happens to be a massive turn on.

Chances are if you’re dating a surfer you’re gonna need to give it a whirl yourself. But don’t worry he’ll be there every step of the way. Even if you have to take a pee in your wetsuit.

Being pasty just isn’t in their vocabulary. They’re basically an advert for St Tropez all year round. Swoon.

His life revolves around surfing, which makes Bali and Australia his dream destinations for vacay. Regular trips to Bondi? If you know what’s good for you never. Let. Him. Go.

A trip to Quiksilver or the nearest surf shop and you’re done– he’ll always need something to add to his growing collection. Just make sure you’ve got the garage space.

14. He gets as excited as you when Drunk In Love comes on

All together now, 'surfboard, surfboard'.

He'll never turn his nose up at you for suggesting a late night skinny dip. Kinky mofo.

If he tells you to stay in the whitewater (AKA the safe bit) god damn it stay in the white water. On second thoughts, if you get tired look who's going to wade in and save your arse... help me I'm drowning.

He's not afraid of shark bites and cuts his feet to shreds on the reef without so much as moaning. He's made of strong stuff and we like it.

Is there anything sexier than a man who knows how to handle himself in the wild??

His idea of a good time? Doing a beach clean with his mates so that birdies and fish can have a plastic-free sea. HOW CAN WE NOT LOVE THIS??

He doesn't need a crazy life plan, he just needs waves and his woman. #simplepleasuresarethebest

This article was written by Lareese Craig follow her @LareeseCraig

What are you saying? Is life a beach when you're dating a surfer! Tweet us @sofeminineUK

Manly Vs. Metrosexual: 32 Things That Make You Question His Manhood