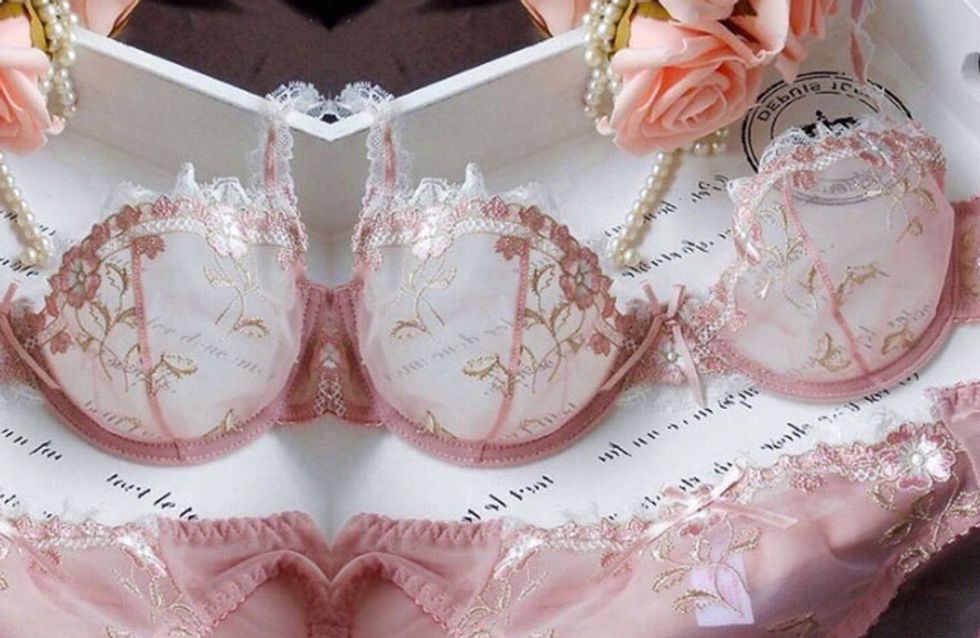 A frightening 1 in 8 women will develop breast cancer in their lifetime, so checking those baps regularly for any sign of change should be *top* of your to-do list. But thanks to some innovative science geniuses across the pond, there could soon be a bra that'll make that whole DIY process a lot easier.

From the Fitbit to the Google watch, wearable technology has enriched our lives in more ways than we ever thought possible, but it could be about to save our lives too. Scientist masterminds in Colombia have developed a bra that could be used as an early detector of breast cancer. And no, we're not talking Madonna's futuristic cone bra either.

The Universidad Nacional de Colombia have released a report claiming that researchers have designed a bra that uses small infrared sensors to detect breast temperature.

Areas with irregular or cancerous cells show up as hotter than normal, because the body sends extra blood there. Enter this amazing bra, which is able to detect irregular temperatures in the breast. By letting the wearer know about this change in temp, which we would be unlikely to be able to detect ourselves, it can act as an early warning system.

Speaking to Fusion, engineering student and the brains behind the idea, Maria Camila Cortes, revealed: "When you have cells in your mammary glands that are anomalous, the body needs to send more blood to that specific part of the body, and the temperature of this organ increases.”

"After only a few minutes of wearing the bra, a light comes on to signal whether your breast temperature is regular or not. A green light lets you know all is well, while a yellow light means you should do another test. A red light does not mean cancer, but it does mean you should head to the doctor ASAP. The bra even includes a small chip that records temperature so doctors can look at multiple readings."

It's no secret that checking your breasts regularly for any changes, or new lumps or bumps is super important, but it can be difficult to know if you're doing it right, so by detecting changes in this accurate way, this bra could completely change the game.

​Kudos to those clever brains behind this AMAZING idea. Helping us females out when it comes to beating this terrible disease, it certainly gets our seal of approval. Of course the doctors stress that this should never REPLACE doctors appointments, screenings or self checks, which should be performed by ladies of all ages, it is simply an early detector.

While this product is only in the design phase, we're hoping with enough research, we'll be able to snap one up sometime in the future!

What do you think of this invention? Let us know @SofeminineUK

How To Get Bigger Boobs Without Implants

We Tried The Phantom Facial & This Is What Happened

Follow us on Instagram!
You might also like
17 Celebs Who Have Spoken Out About Their Mental Health
by Pascale Day
Motivational Before & After Weight Loss Pictures
by the editorial team
Inspirational Tips To Get Your Weight loss Mission Started
by the editorial team
The Rash From This Woman's Bra Turned Out To Be Stage 4 Breast Cancer
by Lareese Craig
Breast cancer: Preventative drugs to be offered to 500,000 women on the NHS
by Maria Bell
This Blogger's Brave Breast Cancer Story Will Make You Want To Hug Your Mum Forever
by Lareese Craig
Do You Know Your Normal? Be Breast Aware With A #CHECKYOURSELFIE
by Vivian KELLY
Prostate Cancer Risk Reduced By Having More Sex With MORE Women
by Vivian KELLY
Why Celery Is About To Be Your Go To Health Food: Veggie May Help Prevent Cancer
by Vivian KELLY
How Often Do You Check Your Breasts? 15 Tips On How To Check Your Boobs
by Vivian KELLY