How I Turned My Spa-phobic Boyfriend Into A Massage Fanatic 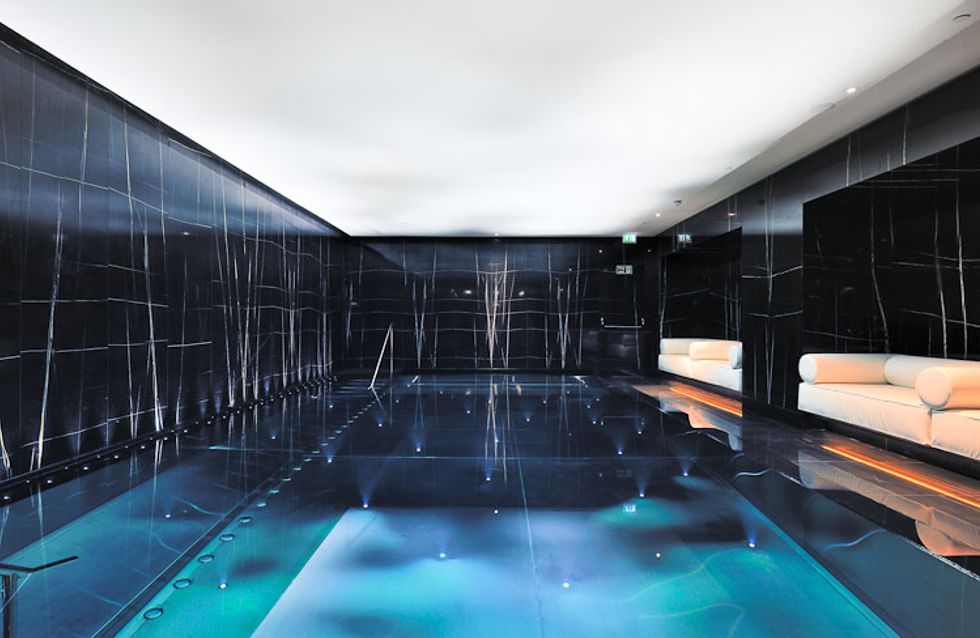 Going to a spa retreat is one of those things you always want to do as a couple but what if your boyfriend is seriously freaked out by being touched by a stranger. There's nothing manly about feeling relaxed, surrounded by scented candles and smelling like Ylang Ylang for the rest of the day, is there? This is what my boyfriend believed anyway. But that was before he has his first spa experience. And now? Well, it's safe to say that he's more than happy being oiled up by a stranger...

The Notorious One: Thermae Bath Spa

When I heard the Thermae Spa in Bath had opened a state-of-the-art wellness suite, I knew I had to take the UK spa scene's harshest critic: my boyfriend. Upon arriving at the spa on a busy bank holiday weekend, the staff provided us with robes and flip flops - a surefire way to make Olly, who is easily impressed, feel fancy. Little did he know this was just the tip of the iceberg when it came to feeling like spa royalty.

On a beautiful day, it is oh-so tempting to find a spot in the rooftop pool and stay there until you're nothing but a shrivelled prune, but we couldn't stop by and not take a peek at the wellness suite. As a lazy person at heart, he was at home in the Celestial Relaxation Room, where he enjoyed an individual heated loungers, lying back to enjoy a visual display of stars and planets. But for me, the highlight was the Ice Chamber. Filled with a cool fog and the odd flake of ice falling through the room, it's the perfect antidote to the sometimes suffocating sauna experience. And, if you're feeling brave, you can even rub the ice onto your skin. We, however, are not the brave type.

Olly's one sentence review: You can't beat a rooftop pool, but I'm glad I found those loungers. (It's true - he said it like, five times.)

The Macho One: ESPA Life at the Corinthia Hotel

I decided to ease Olly gently into the spa life. It's like getting a dog acquainted with going outside: little and often, so you don't spook him. The first spa he experienced was the Espa Life spa in the infamous Corinthia Hotel. Whilst we didn't have a treatment, we did get to try out all spa facilities. All black and white marble dripping with chrome, this place was like a scene from a classic James Bond film. In his swimming trunks covered in ice creams, Olly didn't look the part, but it was all in the mind, baby. We were shown around the labyrinthine spa by a well dressed and well spoken lady, who told us that the marble used on the floor is the same that was used in the Sistine Chapel. Interesting, we thought, but we were both much more interested in the large amounts of free fruit cascading out of a big black bowl in the changing rooms. So many grapes!

We took a dip in the pool, sweated it out in the sauna before patting ourselves down with ice, tried to find each other in the steamiest steam room of all time (at one point, Olly was pressing the Panic Button instead of the button that clears the steam), and reclined in front of the large stand-alone fireplace on heated ​loungers made from large, curved slabs of marble. It was sleek and spectacular. The only thing that could have made it more Bond was a pot of fondu and a surprise attack by Javier Bardem. There were also these cosy little sleeper pods that you could settle into with a magazine and your fruit snacks but they're pretty dangerous if you're a bit short for time - they're ridiculously cosy.

​Olly's one sentence review: It was really, really steamy, but more manly than I expected, which I liked.

Our trip to Moddershall Oaks took us all the way up to Stoke, which upon seeing acres of green grass and no phone reception, was a welcome break from the hustle and bustle of London. We arrived at Moddershall with an hour to check into our room before we were set to get oiled up. The rooms at Moddershall are gorgeous, all dark oak and burnt oranges. Plus it didn't hurt that the jacuzzi was right outside our patio door.

Olly and I both had the light and relaxing top-to-toe massage, ​which was a blissful 85 minutes long. A little too relaxing for me, I think, when I snored myself awake 80 minutes into the treatment. For this massage, we had to be in separate rooms. Olly looked back at me worriedly in his brown robe but I told him he would be fine.

That was before I saw the paper pants.​

Despite feeling awfully uncomfortable in the tiny paper pants which, he says, "I didn't know which way to put them on!", Olly's first spa experience was a hit. Feeling thoroughly relaxed, we headed to the pool to chill further, which was nice until he turned the large neck massager jet on in my face.

After copious amounts of chillaxing, we had dinner at the Moddershall Oaks restaurant. The staff were friendly - one polite fella kept calling us 'folks', which I loved - ​and the food was crazy good. After an immense sleep, we were sad to leave the next day. When the taxi arrived I had to practically pull Olly away from the outdoor pool, where he was clinging on with his fingertips and haul him into the cab.

Olly's one sentence review: The paper pants freaked me out big time, but the whole experience was really relaxing.

Our last spa trip was to the Sanook Spa at the Courthouse Hotel in central London. We decided to go super romantic and get the couple's hot stone massage. Only it didn't feel romantic because we were both late, but the staff were gracious and made us feel at ease.

In the room, our beds were placed about 5 feet apart​. The lighting was dim and kind of romantic, which made it my second time falling asleep during a massage. The massage was firm - really great for someone looking to work out those knots from sitting at a desk all day - and the hot stones were HOT, and I mean really hot - but strangely nice. At first, Olly wasn't sure how to feel about the fact that they massaged the top of your buttocks but by this point he was well versed in the theory that "what happens at the spa stays at the spa" and was happy to just let it happen. A facial followed, which included a scrub and a massage, and left my skin feeling as soft as a damn baby.

​The two masseurs whispered for us to take our time and tiptoed out of the room, and I looked over at Olly. He had been swathed in towels head to toe, and looked like the biggest, hairiest, sleepiest baby I've ever seen.

​Olly's one sentence review: The firmness of the massage made this my favourite one.

After all the spas we tried, I can confidently say each one turned my boyfriend into a spa convert in a different way. The actual experience of each has pushed out the thoughts that spas are a women-only domain like a knot in your lower back. Sometimes you just need to try out different things until you find the treatment you like but inside the soul of every man I can guarantee there's an oiled-up spa addict with cucumbers on his eyes just waiting to stroll out. You just have to find the paper pants that fit.

Is your boyfriend scared of spas? Let us know! @sofeminineUK

​​​​10 #BoyfriendProblems We Should Thank Our Boyfriend For